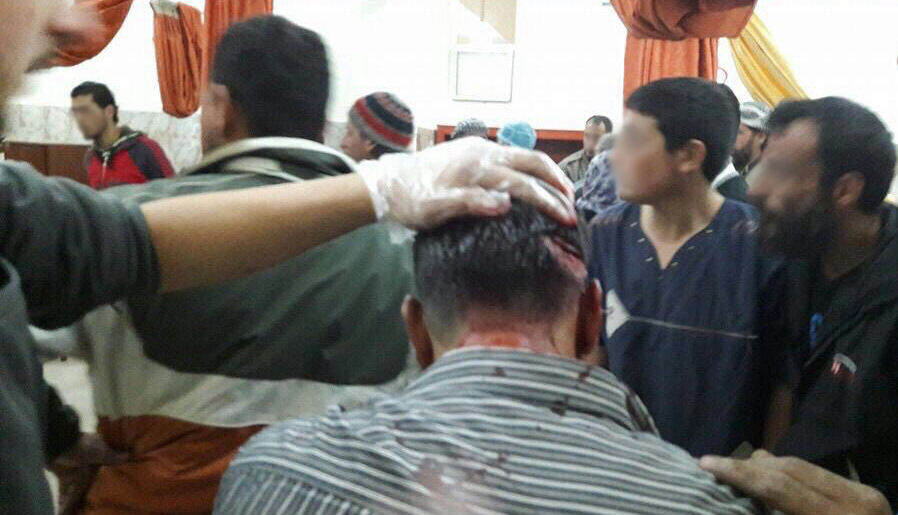 A double-tap barrel bombing on Saturday 28 November on a Médecins Sans Frontières (MSF)-supported hospital in a besieged zone in northern Homs governorate, Syria, has caused seven deaths, the partial destruction of the hospital and an influx of 47 wounded patients needing to be transferred to nearby field hospitals, some of whom died en route.

At around 9:40am local time on Saturday 28 November, a barrel bomb was dropped from a helicopter on a populated area of Al Zafarana town, to the north east of Homs city in Syria, killing a man and a young girl, and wounding 16 people.

These patients were admitted to the Al Zafarana hospital in the mass casualty influx.

Soon after, another barrel bomb landed next to the hospital, causing damage to the kidney dialysis unit.

Then 40 minutes later, at around 10:30 am local time, when the wounded from the first bomb were being treated in the hospital, two further barrel bombs were dropped right by the front entrance, killing one bystander, and wounding 31 of the patients under treatment and medical staff, including two paramedics working for the Syrian Civil Defense ambulance service, one of whom sustained critically serious head injuries.

The second blast also caused partial destruction of the hospital.

The most critically wounded patients were transferred to three nearby hospitals. The 16 from the initial influx were immediately sent to one hospital. A second facility received 21 injured and four who arrived dead, having died on the journey, and the third facility received 10 injured and one dead-on-arrival.

In total these bombings have killed seven and wounded 47 people. Half of the wounded – 23 out of 47 people - were children under 15-years-old and women.

“This bombing shows all the signs of a double-tap, where one area is bombed and then a second bombing hits the paramedic response teams or the nearest hospital providing care,” says Brice de le Vingne, Director of Operations for MSF.

“This double-tap tactic shows a level of calculated destruction that can scarcely be imagined.”

It is unclear at this stage whether the hospital will be able to resume activities after the bombing. Sections of the outside wall have been blown in by the blast and the dialysis unit and part of the medical stock have been destroyed.

One of 16 patients who arrived after barrel bombing in a mass casualty influx at the MSF-supported Al Zafarana hospital near Homs, Syria. Shortly after this photo was taken, the Al Zafarana hospital was struck by barrel bombs, and a further 31 patients were wounded. All 47 patients needed to be transferred to the nearest available alternative makeshift hospitals - five of them died en route to alternative clinics.

MSF is offering support to repair or relocate the facility, and is preparing to send the hospital team essential medical supplies should it be possible for them to continue operating.

“This makeshift hospital was providing a lifeline of care to around 40,000 people in Al Zafarana town and the surroundings,” says de le Vingne.

“It is already a tragedy that seven people - including a small girl - have been killed, but if the hospital has to close down or reduce activities, that is a double tragedy for the people living under the permanent threat of war, with nowhere else to turn for medical assistance.”

MSF once again reiterates its call that all efforts should be taken by all parties to the Syrian war to avoid civilians and civilian infrastructure, including hospitals and ambulances.

The multiplication of these atrocious attacks, with overwhelmingly high numbers of civilians, including women, children and medical staff, wounded or killed, must cease.

MSF operates six medical facilities in the north of Syria and directly supports more than 150 health posts and field hospitals throughout the country, with a particular focus on the besieged areas. These are mostly makeshift facilities with no MSF staff present, where MSF provides both material support and distance training support to help the Syrian medics cope with the extreme medical needs. This support network has been built up over the past four years.

A double-tap attack refers to an attack where one area is bombed, then either more bombing follows on the same area when the rescue teams arrive, or the nearest hospital is bombed when the wounded are transferred there for treatment.