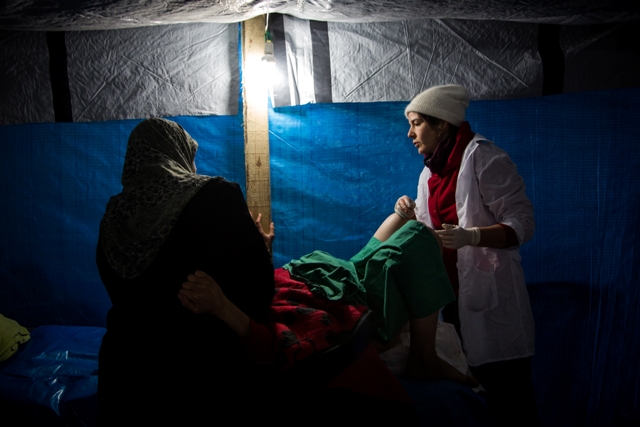 Cathy Janssens is a Belgian midwife, recently returned from an assignment with Médecins Sans Frontières / Doctors Without Borders (MSF) in Syria.

"I went to Syria to set up a mother-and-child health programme in one of the MSF hospitals in Syria. At that time there was no other female medic in the hospital. So I found myself confronted with considerable responsibilities and a huge workload.

When I arrived, the maternal health activities for pregnant women were just starting and the material was still in transit. At first all I had was a room with a hospital bed. Nothing else. I rushed off a request to supply a delivery table, but for those first weeks I had to make do with what was there.

Of course, the women did not wait for the delivery table to arrive; and you cannot turn away a pregnant woman who arrives at the hospital door. With a normal delivery it doesn’t matter too much if you don’t have all the right equipment. But when there are complications, you really need some of the specialised medical kit.

MSF
So for the first weeks I made do with what I had to hand. It’s surprising how adaptable you can be. My chief problem was the lack of specialised equipment for premature babies. It was freezing cold in the hospital.

Skin-to-skin contact – where the baby is snuggled against the mother’s chest – is considered a good way to warm up a baby whose temperature is falling too much. But this technique is not used in Syria and the mothers were rather reticent, so I had difficulties keeping the newborn babies warm. But then we had an idea – heating IV fluid bags in a microwave oven to make small hot-water-bottles.

We quickly realised that we were also going to have to treat a lot of women who were not pregnant. The news spread like wildfire that a female doctor had arrived, and before long women were pouring into the hospital.

Since the start of the conflict women have had increasing difficulties getting any sort of medical care, and in this area our hospital was really the only option.

For many of these women I was more than just a midwife; I was someone who would listen. When women came for a consultation and departed knowing they didn’t have any health problems, I think they left somehow reassured, despite the conflict.

When the midwifery equipment arrived, we moved the consultation room to the other end of the hospital. At first we had been working just across from the Accident & Emergency department.

This meant there was not much privacy for the women, particularly given that there were a lot of men arriving in A&E. I could sense that the women were uncomfortable. But as soon as we moved, the privacy issue disappeared.  The consultation environment for the women was much better, and by the same stroke we created a bit more space in the A&E area.

When we started up the women-only ward, all the shyness vanished and suddenly our contact with the patients improved drastically. We would see women who came into the hospital in full burka but then, settled down in the consultation room, they would peel off the layers and start to open up. This is actually one of the reasons why I would like to go back on another assignment in Syria; the contact with the patients is wonderful.

That said the work was very tough. Women often give birth at night and so after a full day-shift, usually a full night-shift would follow. I would spend most of the daytime doing consultations, frequently being called away to assist a delivery.

There were two Syrian assistants to help me, but they had no medical training, let alone specific obstetric skills. I had to teach them so much from scratch, and I couldn’t leave them to do consultations or deliveries alone.

So I had to be present at each and every consultation, and rushing back and forth each time there was an alert that a woman was going into labour.

So, a heavy workload, and extremely tiring. But you find the energy from somewhere. The women were incredibly grateful. They would hold me in their arms, hug me and thank me over and over.

I did, however, get a real pang every time a child was brought into A&E. There were children, just two or three years old, dying in terrible pain, or with wounds that will handicap them for the rest of their lives. These are innocent little children – and that’s so hard to accept. Particularly with the conflict just getting worse.

But I would relish the opportunity to return to Syria. This is a beautiful project doing some great work and run by a fantastic team of people. We are even expanding the activities from this hospital, and the Syrians we treat are infinitely grateful.ia