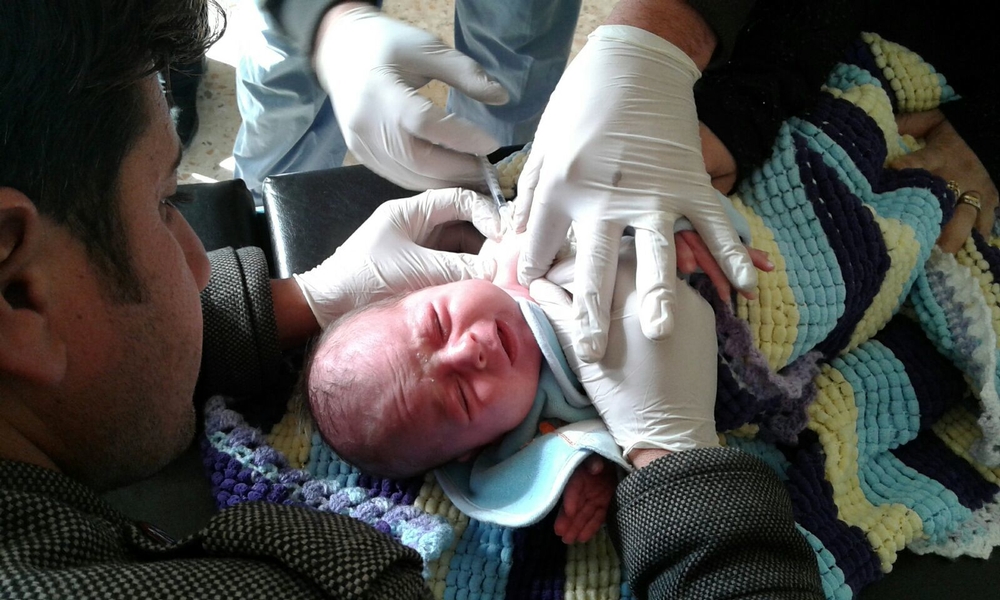 With moving frontlines and the latest offensive on Menbij, a city north east of Aleppo, the number of civilians fleeing their home towns towards the area’s surrounding the Euphrates River has increased.

Both displaced Syrian’s and their host communities are in urgent need of humanitarian assistance.

The dire situation together with an overall collapse of the health system raises fears of a further increase of preventable childhood diseases in the country.

"Once I’m back I’ll never leave it again but unfortunately that can only happen when we are not being attacked again and again," said a  51-year-old from northeastern Abu Qalqal.

Only a few weeks ago, 23 children with suspected measles arrived at the local health centre in Sarrin, north east of Aleppo. All were from communities living in conflict-affected areas close to newly-formed frontlines, where vaccination rates and access to health care remains fragile.

“Younger children are particularly vulnerable to measles, especially when complicated by malnutrition or other illnesses,” Cramond added.

MSF
MSF helps a lady to carry the food to her house during the food and NFI emergency distribution in Abu Qalqal, North Syria

To help stem the risk of infection spreading, MSF scaled-up support to local health authorities in northern Syria and started a vaccination campaign.

2,784 children were rapidly vaccinated for measles in communities that are suffering from the consequences of war.

Local health-response teams also carried out an emergency food distribution and screened all children who passed through the vaccination campaign for acute malnutrition.

"We were lucky to make it here. The main challenges here are getting food and medical care. There is only one private pharmacy with some drugs, but there is no doctor. But we need vaccinations for our children,’" said a 27-year-old IDP woman in Menbij.

Almost six years into the conflict in Syria, communities both in the direct path of the fighting and behind the frontlines continue to experience outbreaks of disease.

There is also difficulty in accessing care for chronic conditions such as diabetes, epilepsy, heart disease and other illnesses which were previously treatable.

Without increased access to medical care, the population’s health will continue to decline.

Since March 2015, MSF has worked alongside the Kobane Health Administration to re-establish basic health facilities.

MSF is currently assisting the health administration in opening a new 36-bed hospital in Kobane town and 8 health clinics in surrounding areas.