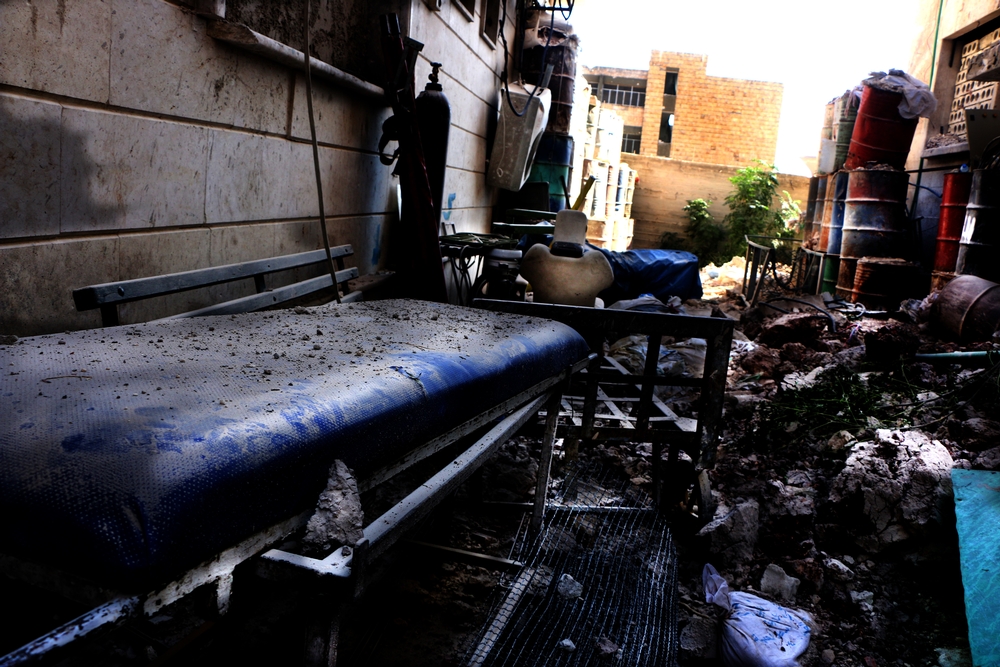 As eastern Aleppo witnesses the fiercest bombings since the beginning of the Syrian war, access to healthcare has become extremely limited. Seeking medical care is a danger in itself, with at least 23 recorded attacks on eastern Aleppo’s eight remaining hospitals since the siege began in July.

Eastern Aleppo’s two main surgical medical facilities, supported by MSF and other organisations, were damaged five times each, leaving one facility out of service since 1 October. In the past two weeks alone, the bombing campaign has claimed at least 377 lives according to the Directorate of Health, which only registers casualties that are confirmed at hospital sites. Many of the wounded are being treated at homes and elsewhere, and are therefore not registered.

MSF/Ghaith Yaqout Al-Murjan
The M10 hospital facility was heavily damaged by shelling and forced to suspend activities on Wednesday September 28. On October 1 it was damaged again and went out of service and two days later, while under rehabilitation, it was hit yet another time by bombs and a number of maintenance workers were killed.

“The situation is unbearable,” said Carlos Francisco, MSF’s head of mission in Syria. “The few remaining doctors with capability to save lives are also confronting death. Only a few days ago, the manager of one of the health centres we support and his whole family, including kids, were killed by a barrel bomb.”

All eight hospitals in eastern Aleppo are currently overwhelmed with high numbers of war-wounded patients. People are literally dying on the floors of the facilities. In an area with population of approximately 250,000, only seven professionals remain who are capable of performing surgeries on war-wounded patients.

Civilians are being massacred

“There are a lot of wounded people because the bombs are falling in busy areas – crowded streets, bread queues, or the queues where aid is being distributed,” said Dr Abu Waseem, the manager of a surgical hospital supported by MSF.

Completely isolated by the siege, people throughout eastern Aleppo are suffering from a lack of basic goods. Fuel has also been depleted, which has an added impact on both ambulances and hospitals. “The Syrian and Russian governments have taken this battle to a new level,” said Pablo Marco, MSF’s operations manager in the Middle East. “The whole of eastern Aleppo is being targeted. Hundreds of civilians are being massacred; their lives have turned into hell.”