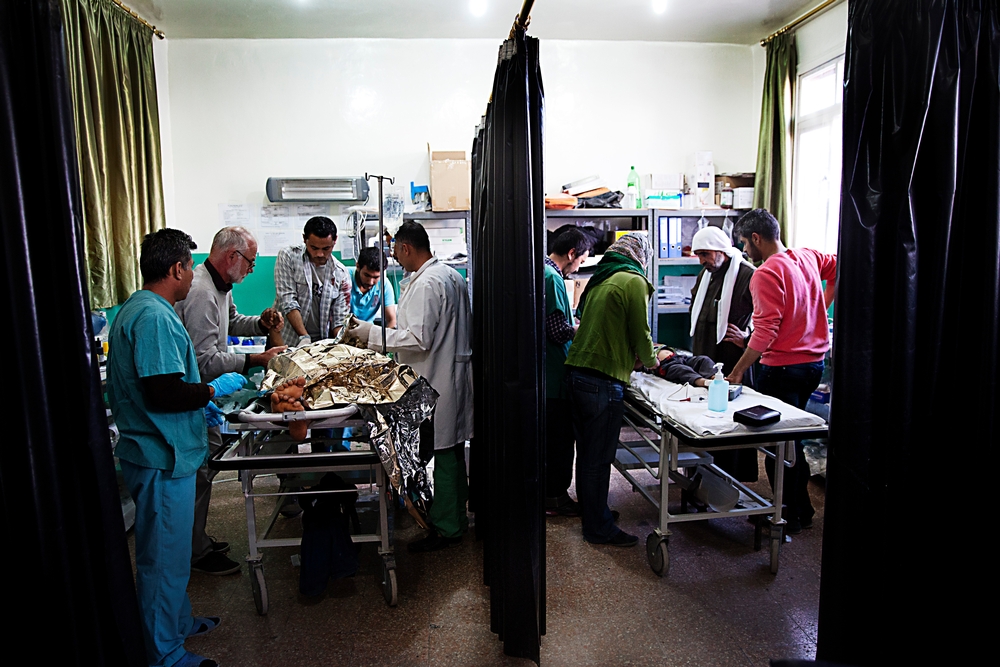 The brutal violence against the medical mission has put the healthcare system on the verge of collapse.

As the war in Syria enters its fifth year, a dreadful humanitarian situation reigns in eastern Aleppo where the indiscriminate use of barrel bombings since December 2013 has caused high numbers of fatal casualties and wounded, many of them women and children, said today the international humanitarian aid organisation Médecins Sans Frontières/Doctors Without Borders (MSF).

Access to essential medical treatment has now become almost impossible either due to lack of supplies and qualified medical staff or to targeted attacks against medical structures. Early discharge of patients given the difficulties to run post-operatory care together with shortages of antibiotics results in high morbidity and mortality rates related to surgical complications such as infections or bleeding.

Find out more with a Compilation of Testimonies Illustrating the Hardships of Daily Life in Eastern Aleppo under Barrel Bombings, through the Eyes of Local Residents

MSF’s teams have also observed an increase of obstetrical complications due to exposure of pregnant women to stress as well as lack of antenatal care for prevention and treatment of complications such as pre-eclampsia which in turns increases risk of preterm delivery, miscarriage and low weight for gestational age new-borns.

Healthcare system on the verge of collapse

The dire humanitarian situation has been exacerbated by the brutal violence against the medical mission putting the healthcare system in Aleppo on the verge of collapse. From an estimated 2,500 doctors working in Aleppo at the beginning of the conflict, less than a hundred remain in the hospitals still operating in the city. The rest have fled, become internally displaced or refugees, or have been kidnapped or killed.

From the early phases of the uprising, doctors and medical workers have been threatened, detained and tortured by government security forces and allied militias for providing medical care to injured protesters and for being perceived as sympathetic to the opposition.

Many health facilities in opposition-held areas have been the target of repeated bombing by the government forces, causing partial or total destruction as well as deaths and injuries amongst medical staff and patients.

Massive violations of the medical mission

In opposition-controlled areas, humanitarian access has been jeopardized due to the growing atomisation amongst the armed opposition, ever-shifting battlefronts, emergence of multiple uncoordinated factions and changing dynamics amongst armed factions.

MSF has witnessed different forms of violations with varying degrees of severity, ranging from a general disregard to health facilities and personnel, to targeted violations mainly due to perceived personal ideologies or affiliations.

Many health professionals and patients have faced harassment, detentions, torture and executions committed outside any judicial or legitimate structure – the most tragic one for MSF being the killing of a local surgeon working for the humanitarian organisation.

“In an environment of massive violations of the medical mission, MSF’s teams have unequivocally held on to humanitarian principles as the only possible way to preserve the humanitarian space,” explains Raquel Ayora, MSF’s Director of Operations.

“This principled approach has been increasingly embraced by other local medical facilities and networks that MSF collaborates with. The hope is that armed groups understand the critical need for respect of the medical mission to ensure treatment of all sick and injured without exception and to provide them with the best possible medical care.”

The targeting of aid workers

But the ability to deliver assistance inside Syria reduced even further in the last year because of the targeting of aid workers by the Islamic State (IS). MSF, like several other aid groups, experienced this practice first hand when 13 of its staff were abducted in January 2014 and five of them detained for almost five months.

As a result, four life-saving hospitals in the north of Syria closed down, and the quantity of medical supplies to hundreds of health facilities across Syria reduced significantly, and stopped altogether in regions controlled by IS.

MSF/Anna Surinyach
This old woman was shot in her stomach during clashes in Aleppo city. MSF hospital in northern Syria (Aleppo province).

In August 2014 MSF decided to suspend the presence of international staff inside Syria until the organisation obtains reliable security guarantees from the armed groups, particularly those manifesting suspicion and intolerance of foreign aid.

Still, tens of thousands of people are isolated from any kind of assistance, and sick and wounded people are deprived from seeking safe access to medical care while massive waves of residents are fleeing Aleppo. Out of 97,000 Syrian refugees in Turkey’s border town Kilis, a 20% (19,400) arrived during the last 6 months.

The Syrian exodus goes on and the total number of Syrian refugees is about to cross the four million mark, yet the world still seems unable to deal with this humanitarian crisis.

MSF runs two health facilities in Aleppo governorate. One of the hospitals, located near the Turkish border, has 28 beds, and services offered include an emergency room, maternity and outpatient care (around 50 consultations per day). Another MSF hospital in the outskirts of Aleppo city carried out last year roughly 16,000 consultations and admitted 410 patients. MSF also supports ten field hospitals, nine first aid points and three health centres in the province.