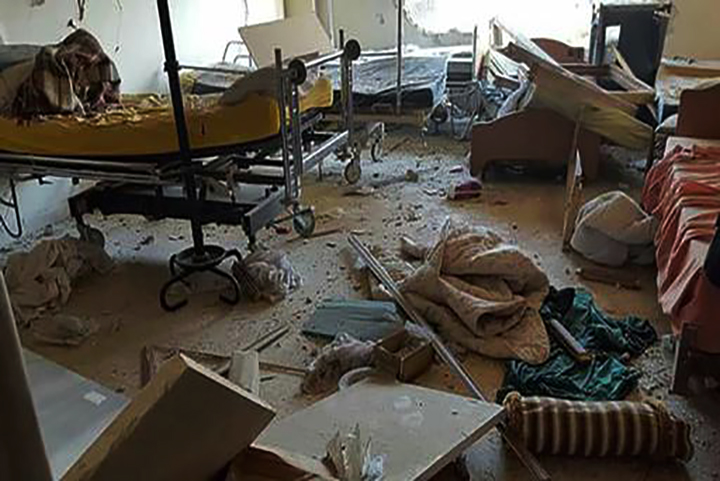 A reference centre specializing in paediatrics, the hospital provided essential care for around 70,000 people in the region.

The bombing destroyed most of the hospital building, including the operating theatre, intensive care unit, paediatric department and ambulances.

The hospital provided emergency care for over 250 patients per day, many of them women and children.

MSF
The hospital was struck with two direct (and two in the immediate vicinity) aerial strikes at around 2:00pm local time.

Since early 2014 MSF had supported this hospital with supplies, technical advice and later with financial support for the hospital staff to enable them to continue their work.

"We have to admire the courage and dedication of Syrian medics continuing to work in the midst of a war where hospitals are so regularly hit in bombing and shelling attacks; and we have a strong sense of obligation to support them in their essential life-saving work.

Each time a hospital is destroyed, whether it is targeted or in an indiscriminate attack on civilian areas, it deprives Syrians of another lifeline of healthcare.

MSF
The bombing destroyed most of the hospital building, including the operating theatre, intensive care unit, paediatric department, and around 80 percent of the medical devices, the ambulances and the generator

This attack comes in an environment of renewing intensity of significant mass casualty events in Idlib Governorate. In the first six months of 2016, the two largest MSF-supported reference hospitals in Idlib Governorate reported seven mass-influxes of wounded, resulting in 294 wounded and 33 dead.

In the month of July alone, the same facilities dealt with nine mass-influxes of wounded resulting in 466 wounded and 37 dead.

“We repeat our urgent call to all those with influence on the conduct on the war in Syria, including the 4 out of 5 UN Security Council permanent members that are participants in the war, to urgently effect change to stop hospitals being hit in the course of the fighting,” says Dallatomasina.

“As humanitarian medics, we will continue to do all we can to boost medical care in Syria, but we need to see an immediate end to attacks on hospitals.”