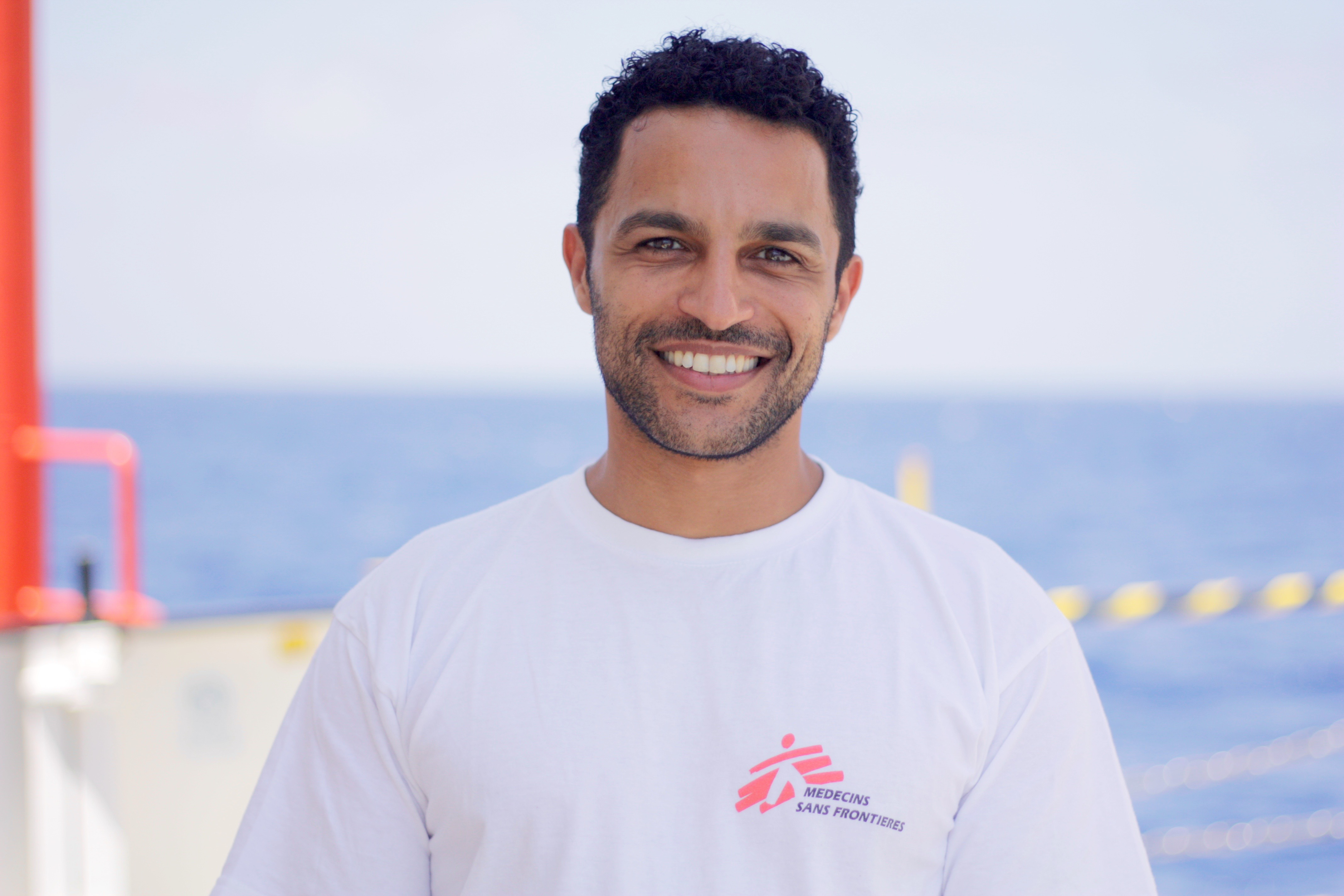 Syria: Saving lives in the rubble of Raqqa

Dr Javid Abdelmoneim recently returned from the Syrian city of Raqqa, which was taken by Syrian Democratic Forces and US-supported Coalition forces from Islamic State forces in October 2017.

He spent a month working in Syria saving lives in the rubble of Raqqa in a clinic set up by MSF in one of the few houses left standing in the city. Although the fighting had stopped, he found the war still taking a terrible toll. 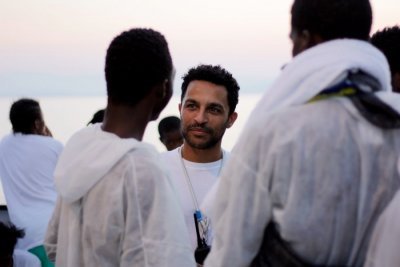 But in just one month in Raqqa, I treated more severely wounded people than I’ve seen in the past three years in A&E.

Raqqa has been mostly destroyed, with vast swathes of the city raised to the ground.

Everywhere you look are burnt-out buildings and rubble. The streets are littered with improvised explosive devices and landmines.

Residents trying to rebuild their city are being wounded and killed all the time by explosive devices.

MSF opened an emergency room in Raqqa within three weeks of the end of the offensive. It’s just an ordinary house with a few rooms, but we’ve been inundated with patients. During the first fortnight, about 55 blast victims arrived in the small emergency room each week – that’s almost eight a day.

The blast victims ranged from people with shrapnel wounds to people whose arms or lower limbs had been blown off.

“Booby traps and other improvised explosive devices have been planted throughout the city, many of them quite sophisticated, with heat and motion sensors and trip wires, operating on time delays. They had planted them in houses, in cupboards, under beds – everywhere you could think of.”
Javid AbdelmoneimMSf doctor

Our job was to stabilise the patients: to stop the bleeding, wash their wounds, splint their broken bones, give them strong painkillers such as morphine and ketamine, and start them on antibiotics to control infections, all with the aim of transferring them to our hospital in Tal Abyad, two hours’ drive to the north, where we have full trauma surgery services.

There were usually six of us in the room – two doctors and four nurses – working on patients in three beds. We were a mixture of Syrian doctors and nurses and international staff, all working together as a team.

The main reason there were so many injuries was because the city was littered with improvised explosive devices, many of them quite sophisticated, with heat and motion sensors and trip wires, operating on time delays. 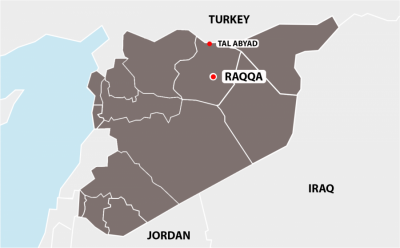 They had been planted in houses, in cupboards, under beds – everywhere you could think of. There were also huge amounts of unexploded ordanace and remnants of war

We heard stories of men returning to their homes in Raqqa to prepare them for their families. They’d enter the house, trip a time-delayed device without knowing it, and then, three days later when their whole family had arrived, the device would go off.

The former residents of the city are coming back in waves – an estimated 90,000 people have returned so far. With only one organisation doing the brave job of demining, it’s clear there are going to be many more casualties. 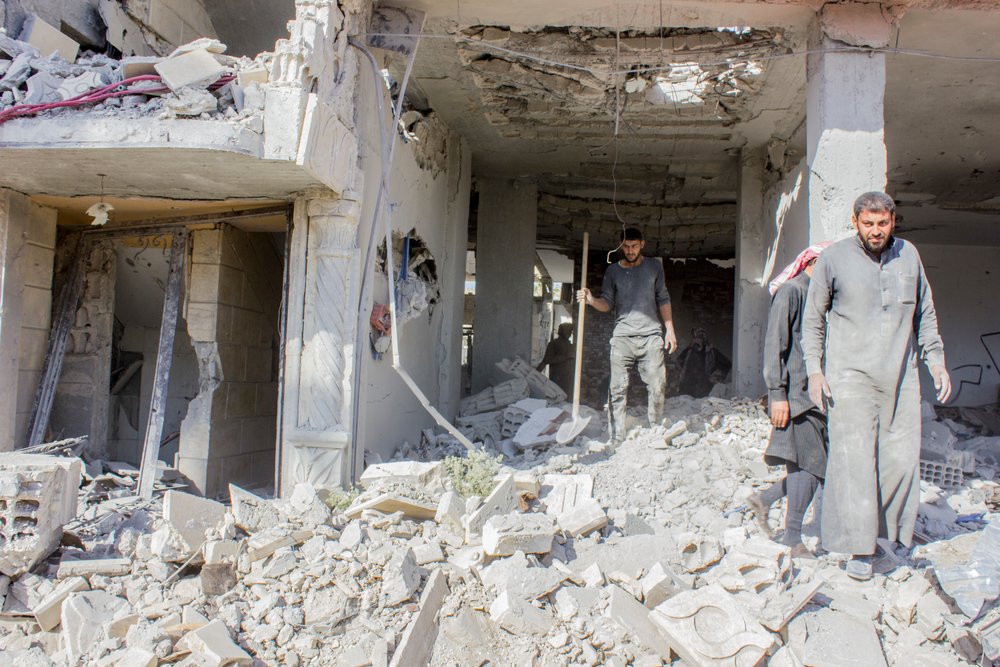 Diala Ghassan/MSF
A family cleaning their house from the rubbles after being destroyed by the war.

90 seconds to save a life

I remember one man was brought to us who had had one leg blown off at thigh-level, while the other one was attached just by skin and muscle. He had multiple open wounds and fractures and had lost nearly all his blood.

We couldn’t even feel a pulse, there was so little blood. He was taking his last breath.

"We’d see pregnant women who had received no antenatal care with uncontrolled high blood pressure that was causing them to have seizures. The only treatment was to deliver the baby ASAP."
JAvid AbdelmoneimMSF Doctor

In trauma situations like that, you’ve literally only got about 90 seconds. You need to work together as a team and you need to do everything at once.

We opened two IV lines, grabbed the blood from the fridge, gave him six units of blood and three litres of fluid, gave him analgesics and applied tourniquets to stop the bleeding.

There were nine of us working on him at that point. And it was amazing, because when you’ve taken over someone’s breathing because they’ve stopped breathing for themselves, they’re basically dead. But we managed to save him. 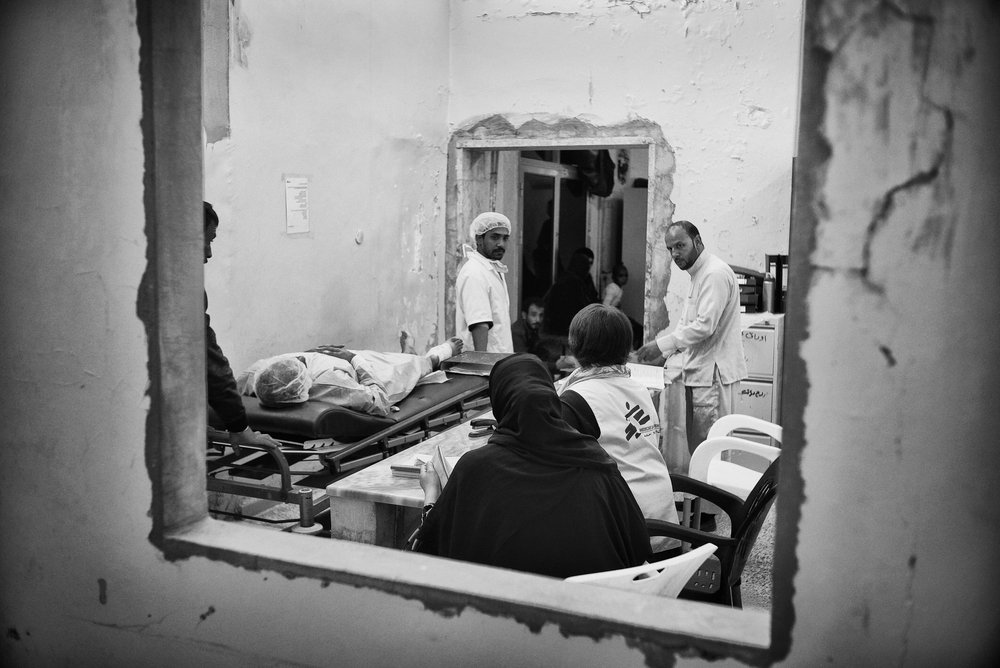 Eddy Van Wessel
A Patient is being transferred to the Operation theatre by MSF medical teams.

We got his blood pressure back to the point where he was agitated and fighting us, which is a great sign. It wasn’t good for us as we tried to hold him down, but it was great for him.

We stabilised him to the point where we could transfer him for surgery. Apparently, he needed a further 29 units of blood products to stay alive.

While I was there, about 40 percent of our patients were blast victims and the other 60 percent were what we called “ordinary” emergency room patients. They were far from ordinary, however.

I’d see someone with diabetes, but because they’d not had a regular supply of insulin for years because of the war, they’d have catastrophic diabetic complications: deep leg ulcers, high blood sugar with high acid levels, which all needed emergency treatment.

"In all my years with MSF, I’ve seen nothing more impressive than the work of that clinic in Raqqa."
Javid AbdelmoneimMSF doctor

We’d see pregnant women who had received no antenatal care with uncontrolled high blood pressure that was causing them to have seizures. The only treatment was to deliver the baby ASAP.

As the city is mostly rubble, with plenty of uncleared roads, we saw a lot of car accidents and children falling off motorbikes. We also saw a lot of people falling off roofs with the most awful broken limbs. And a lot of burns from diesel stoves, as that’s the only fuel available for heating.

We did our best to patch people up and either send them home or send them on to our hospital in Tal Abyad. It was important, lifesaving work.

In all my years with MSF, I’ve seen nothing more impressive than the work of that clinic in Raqqa. It’s the right work at the right place at the right time.

The people of Raqqa – and of Syria as a whole – have been through so much, and it’s not over yet. We’re one of the only medical organisations working in that area, and I’m proud that we’re there, playing a part.

Your donations will ensure that our emergency room team can continue to do what they do so well, while allowing us to expand our medical services in Raqqa.

A city of this size needs maternity care, surgery, treatment for chronic diseases and mental health services, amongst others. No one knows what the future will bring but, for now, our emergency room and primary healthcare unit – set up in a house on a residential backstreet – is weaving some MSF magic for the people of Raqqa.

Thank you for allowing me to be a part of this team.”