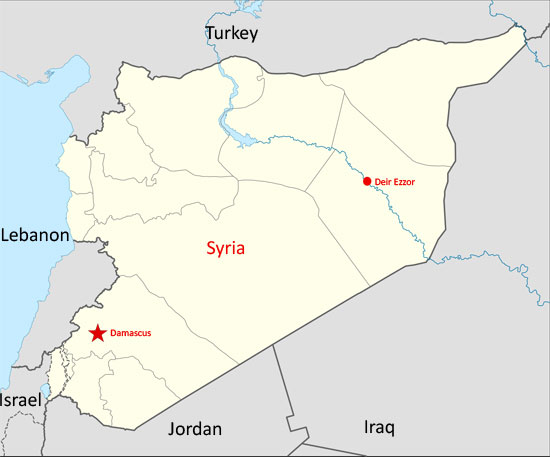 Tens of thousands of people, many of them wounded, are trapped in the city of Deir Ezzor, eastern Syria, due to intense fighting and aerial bombardments.

Médecins Sans Frontières/Doctors Without Borders (MSF) calls for the sick and wounded to be evacuated to safer locations and for international medical teams to be given official authorisation to provide impartial assistance to all those who need it.

“Deir Ezzor currently has just one makeshift hospital with only four doctors working there,” said MSF coordinator Patrick Wieland, who has just returned from Syria.

"The doctors are completely exhausted after six months of working in a combat zone. But they refuse to leave the city and are continuing to treat the wounded around the clock.”

Despite support from a Syrian doctors’ organisation, medical supplies are almost impossible to get hold of, and aerial bombardments and sniper fire make evacuating patients by stretcher extremely difficult.

An MSF team unofficially visited Deir Ezzor governorate in late November to evaluate the needs in this isolated region ravaged by the war.

It was too dangerous to enter the city of Deir Ezzor, home to a reported 600,000 people prior to the conflict, but local people reported that tens of thousands of people are trapped in the city, which is being shelled and bombed daily.

Those who remain are predominantly the poor and the elderly who were unable or unwilling to leave and are now extremely vulnerable.

Map of Syria
MSF is running three hospitals in the north and northwest of Syria. Although there are considerable medical needs in Deir Ezzor, it is too insecure for MSF to set up programmes in the city at present.

MSF visited several public and private hospitals within a 50-km radius of the city of Deir Ezzor. It is extremely difficult to provide surgery and emergency care, yet one of the hospitals had received more than 300 wounded patients during the previous week.

Forty of the wounded were transferred more than 400 km towards Turkey in the hope they could cross the border to obtain proper medical care.

The health workers who have remained in the area are doing their best with minimal resources. The health system is being targeted, and medical supplies, including drugs and blood products, are running out, while the number of wounded continues to increase.

Essential medical supplies cannot be obtained from Damascus, while delivery options from neighbouring countries are severely restricted due to distance, problems crossing borders and lack of security.

As winter approaches, many of those who fled the city of Deir Ezzor have been taken in by people in surrounding areas or are staying in public buildings, particularly schools.

The local population has been generous in its assistance but is unable to meet all the pressing needs of those displaced from their homes.

MSF calls for the evacuation of the wounded and sick from the city of Deir Ezzor to safer locations, in respect of humanitarian law. MSF appeals for international and impartial medical assistance to be officially authorised by the government and for such assistance to be respected by all parties to the conflict.

Despite the scale of humanitarian needs in the area, the Syrian authorities have not authorised the deployment of international impartial medical assistance.

Nonetheless, MSF is doing everything possible to increase its presence and its assistance, in collaboration with networks of Syrian doctors, in Deir Ezzor governorate and elsewhere in the country.

MSF teams are working in three hospitals in northern and northwestern Syria. MSF provides emergency medical care there, including surgery and medical consultations.Since late June 2012, our teams have treated more than 2,500 patients and performed more than 550 surgical operations.

In Jordan, Lebanon and Iraq, which all share borders with Syria, MSF has been providing medical care mainly to Syrian refugees. MSF teams in these countries are prepared to deal with needs arising from the conflict in Syria