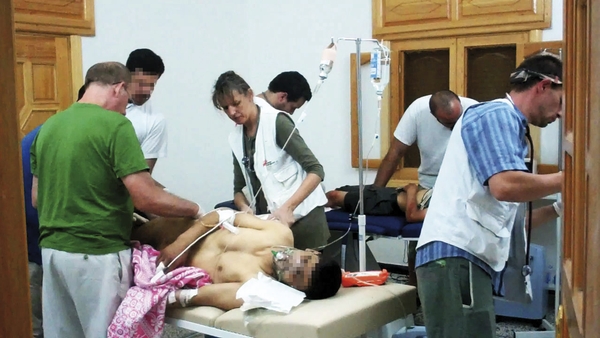 Médecins Sans Frontières (MSF) has been working in Syria for the past two months, trying to provide humanitarian assistance to people affected by the conflict. With the help of a group of Syrian doctors, a team was able to transform an empty house into an emergency hospital in just six days. Jump to video

As of mid-August, MSF has admitted more than 300 patients to this facility and surgeons have carried out 150 operations. The injuries have mainly been related to the conflict, for the most part caused by tank shelling and bombing. Many patients have suffered gunshot wounds. The majority of the patients have been men, but up to one in ten are women, and approximately one in five are under the age of 20. According to the medical team, two-thirds of surgical procedures have been emergencies.

However, the future of the project is uncertain. MSF is working without the authorisation of Syrian authorities. In addition, the changing nature of the conflict, problems accessing supplies, and the difficulties faced by the wounded in reaching the hospital are all threatening the continuation of activities.

Given the scale of the violence in Syria today, the MSF team, made up of Syrian and international staff, is only able to provide a limited amount of medical support. Nonetheless, this support is essential for the survival of the patients treated at the hospital.

For Anna, Kelly and Brian MSF staff who have just returned from Syria, the kinds of wounds treated by the surgical team bear witness to the use of heavy artillery and to the violence of a war that does not spare civilians.