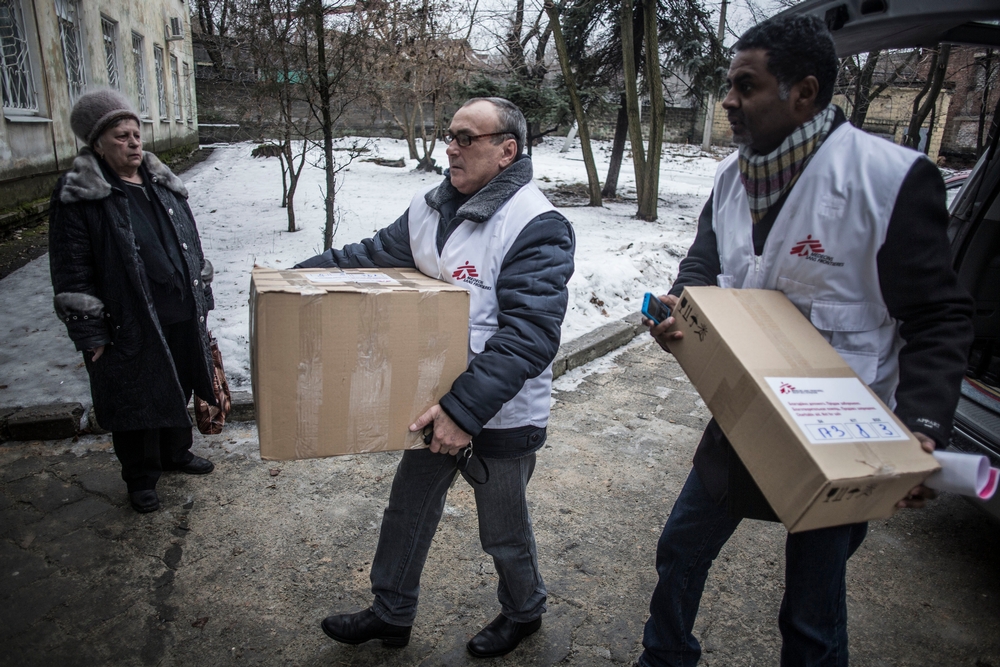 As fighting escalates in eastern Ukraine to a level not seen since August, the situation for civilians caught in the conflict zone is now dire. With doctors working in hospitals close to the frontline struggling to treat the wounded with dwindling supplies, Médecins Sans Frontières (MSF) teams are stepping up their support, but continued heavy fighting is preventing them from reaching the hardest hit areas.

Emilie Rouvroy is the MSF coordinator in Luhansk, eastern Ukraine.

The fighting has intensified dramatically since last week and the situation here is deteriorating rapidly. In the last five days, there has been heavy fighting, we hear the constant boom of shelling and crackle of shooting. We’ve had reports that more than 70 houses have been damaged or destroyed in the last week, and a number of hospitals have been damaged since the fighting began in the summer.

This week, one building of a psychiatric institution that we are supporting has been destroyed by shelling.  It’s getting more and more complicated to get into the conflict-affected areas. On Monday the checkpoints to cross into the rebel-controlled areas were closed and nobody has been allowed to pass. 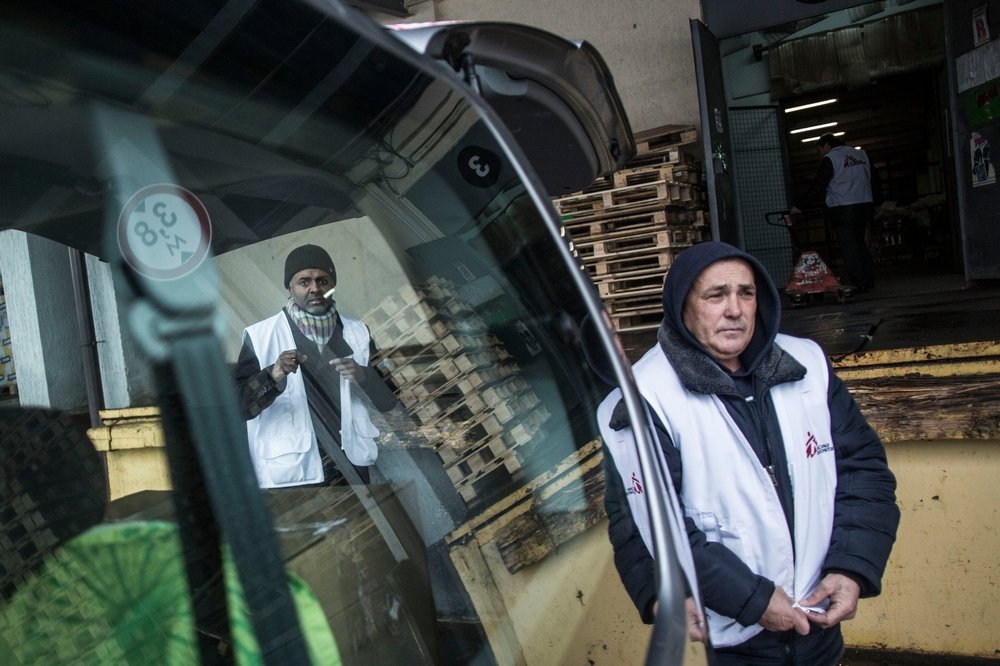 Manu Brabo
MSF employees transporting humanitarian aid from their main warehouse in Donetsk before delivering it to several hospitals in Donetsk, Ukraine

Medical supply lines have been cut and little to no medicine is able to get through. This has been the case for months now. When MSF started working here in May last year, we focused on supplying hospitals on the frontline with kits to treat war injuries. Obviously, when you’re in a conflict zone, the frontline is where the people are being seriously injured and killed. After months of stress on the health system, it is clear that the conflict is affecting the whole population of the area. Basic healthcare, maternity care, treatment of chronic diseases - everything is affected.

When you go to the hospitals or primary health care centres, many of them are empty because the doctors don’t have enough medicines. As soon as we get any supplies, we distribute them. But it’s not enough. The biggest problem is that there are no more psychiatric drugs, and no anaesthetic drugs to do surgeries. The doctors are desperate for supplies.

It’s not just medicines. I’ve visited orphanages and homes for the elderly and physically and mentally disabled and I’ve seen people who are weak and are not getting enough food. They’re relying on donations and the goodwill of the people around them, but they’re hanging on by a thread. They’ll receive one bag of potatoes one day, and then cabbage another day. When you visit the kitchen, there is always some food on the stove but the fridges are empty.

There are shortages of everything; cleaning material, soap, even nappies. If you don’t have nappies, then you have thousands of people in aged care homes, orphanages and hospices for the disabled, sleeping and living in their excrement all day. But you can’t find nappies here in the market anymore. We’ve ordered more than 10,000, but it will never be enough because you need millions of them. And now that movements into the conflict area are cut, it’s even worse. 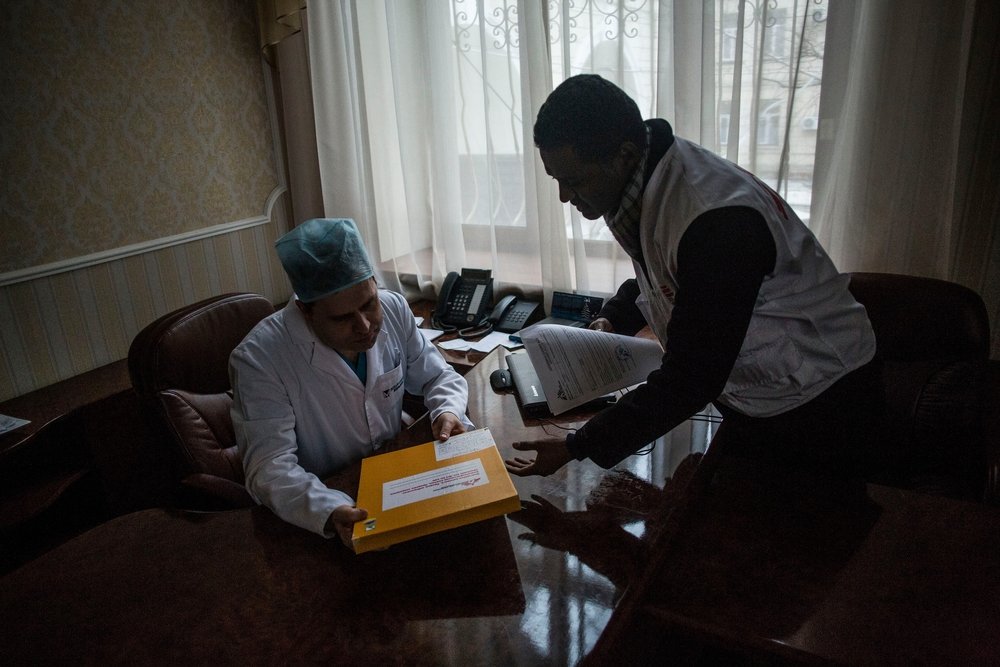 People are traumatised by the conflict

Months of protracted fighting have had a huge psychological impact on people living on both sides of the frontline. There is a town I visited recently, 500 metres from the frontline, which has been shelled repeatedly. Houses have been destroyed, the electricity has been cut off and the people are traumatised. The head doctor of the hospital asked us to help his staff because they’re so stressed that they can’t treat patients. We’ve just sent our team of psychologists and we’re hoping to expand our mental health work.

In another town located ten kilometres from the front line, I met the mayor and he was crying while I was speaking to him, the situation is just too hard. There has been more shelling since, and we are going back to make a donation of supplies for treating war wounded patients, as well as blankets and hygiene materials.

People living here have not received their pensions in six months. People have run out of money, there is no industry here. This war has destroyed so much. Doctors are still working, and some of them walk more than an hour each day because they don’t have the money to pay for transport. But they’re working for free: they haven’t been paid their salaries for more than six months.

The only thing keeping the system going is the commitment and dedication of the community and the medical staff. That type of solidarity is impressive to witness, but you can’t ask people to continue like this for months on end. People are just holding on, if it continues like this, it’s only a matter of time before they just collapse.

There are many terrible things about this conflict, but one of the hardest things is that people feel abandoned. They’re grateful that we’re here, but wherever we go they ask us: “Where is everybody? Where are the journalists? Where is the international community? People are dying here every day.”