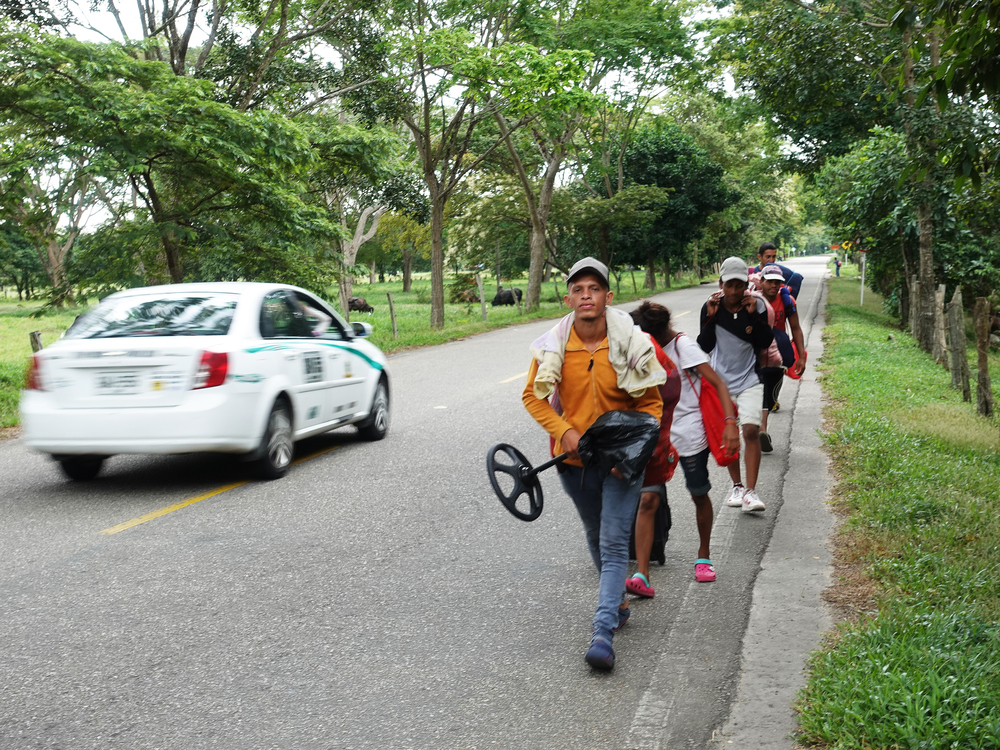 Venezuelan migrants at a crossroads on the Colombian border

Nearly 44,000 Venezuelans fleeing the economic and political crisis gripping their country have arrived in Arauca, northeastern Colombia, in recent years. Although they find what they need to survive there, many face precarious situations that are not being adequately addressed.

"My family doesn’t know what I’m doing − imagine what they would think," says Maria.

It's Wednesday morning and a light breeze offers some respite from the typical heat of the Tame region. But Maria is still not really familiar with the weather here. She arrived just 15 days ago, seeking a way to save her youngest daughter who, she says, was "about to die of malnutrition".

For Maria, the days when she took care of her three children while her husband worked as a battery collector in Yaritagua, three hours from Caracas, already seem a long time ago. Earning money had never been a concern for her because, before marrying her husband, Jean Marcos, her brothers took care of that side of things.

"They wouldn't believe that I'm doing this now," she says as she opens a bag of rubbish she finds on the pavement and starts rummaging in it for plastic, cans and cardboard to sell for recycling. She finds a couple of soda bottles, which she immediately packs into a canvas bag.

"We used to think that this was done by beggars, and for us it’s unpleasant, but it’s what gives us our daily bread," she says.

Since arriving in Tame, Maria, Jean Marcos and their two-year-old daughter (their other children, aged five and seven, are with their grandparents in Venezuela) have lived on the street. The owners of a house on a corner allow them shelter under the eaves.

Thanks to a therapeutic feeding treatment, the child has recovered but she recently developed a skin allergy that forced Maria to return to the MSF clinic in Tame with her.

For this family, as for all Venezuelans in Arauca, the only way to have medical treatment is through the service offered by Médecins Sans Frontières / Doctors Without Borders (MSF) in Tame’s former hospital.

Vital emergencies and childbirth aside, the Colombian system only assists those who are registered with Sisben, the assessment and identification system for social assistance. This is not the case for the vast majority of the nearly 44,000 migrants who, according to official figures, are based in this border region. 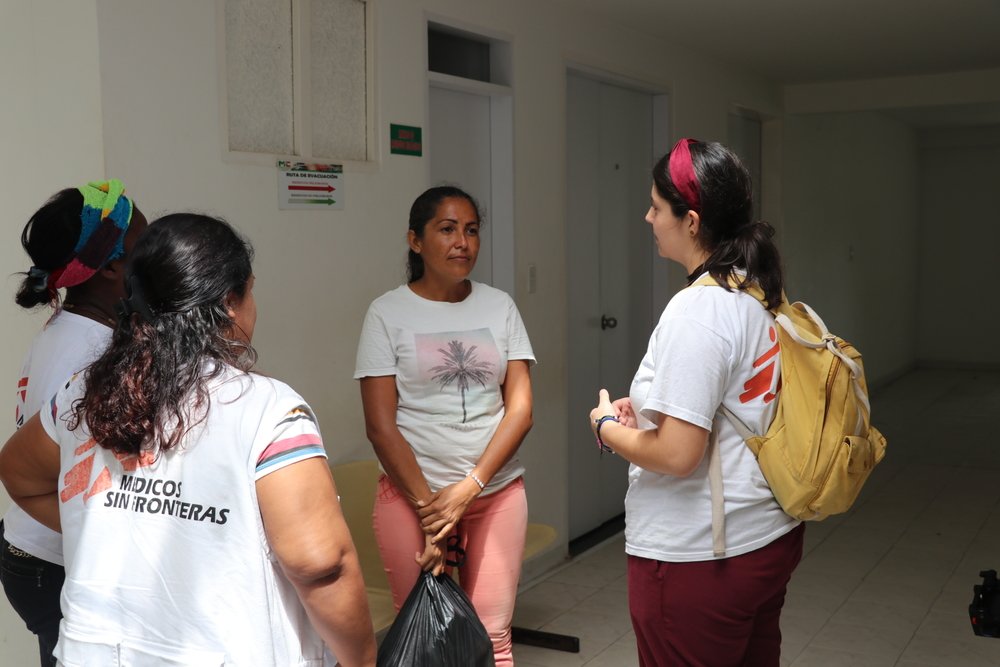 MSF/Esteban Montaño
Leaving behind her country and her teaching job plunged Yubeisi into a deep depression that meant that she couldn't even get out of bed. She came to MSF clinic to ask for advice on enrolling her children in school and she was able to talk to the psychologist. “Since that day I haven't wanted to leave here”, she says

All these people and those who enter and leave the country daily by official or non-official means, require services that Colombia is failing to provide.

“This is an emergency because of the huge number of people crossing the border in search of food, healthcare, a place to sleep and a school for their children,” says Sebastián García, coordinator of the MSF project in Arauca.

“Colombia has set a good example across the continent because of its openness to receiving these people, but in reality there is a lack of capacity to respond to a situation of this magnitude.”

In this region, battered for decades by an armed conflict that severely affects the civilian population, the consequences of this vulnerability are evident in stories like Garith's. This 33-year-old woman left Venezuela six months ago when she saw that one of her four children was in danger of dying.

“Jordanis Emanuel, my seven-year-old third child, had pneumonia and in Venezuela we couldn't find the medicines he needed. It got worse until I said: ‘Either I leave or my child is going to die here in my arms,’” recalls Garith.

Today the child has recovered, but the family’s situation is far from hopeful. The parents provide for them by finding recyclable materials and working occasionally as car park attendants. Yet at the end of the month, they find it difficult to raise enough money to pay the rent for the house with three rooms and a bathroom that they share with nine other people.

"My greatest urgency is to find a job so I can buy food for my children and for them to be able to enrol in a school,” says Garith. “So far, that hasn’t been possible." 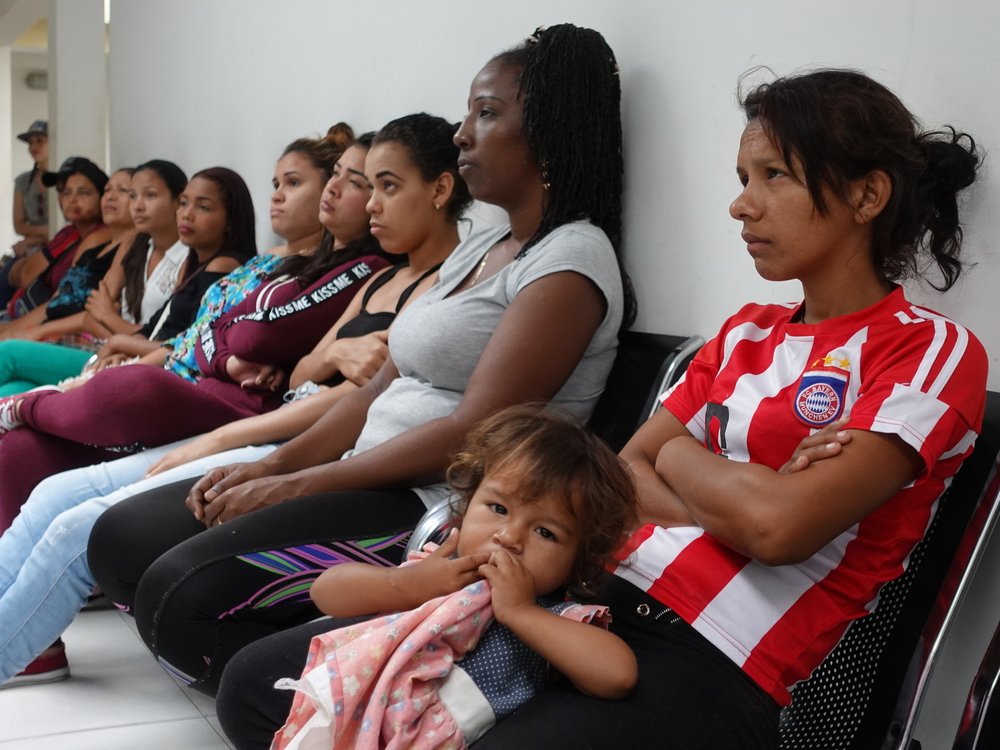 MSF/Yves Magat
Maria Querales and her daughter waiting for a consultation in the MSF clinic in Tame. The two-years-old children developed a skin allergy after living during 15 days on the street.

Three times, her husband hasn’t been paid after working as a bricklayer.

"They cheat us because they know we can't report them," explains Garith.

Lack of access to basic services, lack of food, takes their mental toll

Food insecurity and the precariousness of housing are two of the factors that most affect the health of Venezuelan migrants. According to Sergio Palacio, MSF manager of medical activities of in Arauca, 80 per cent of the illnesses observed in consultations with both children and adults are directly related to not having access to basic services, the consumption of unsuitable drinking water and lack of food.

The migrants’ mental health is also impacted, as Yubeisi knows only too well. Leaving behind her country and her teaching job plunged her into a deep depression that meant that she couldn't even get out of bed. Her situation was worsened by the fact that she felt discriminated against because of her origin, something she never imagined could happen when she decided to migrate to Colombia.

“My arrival here was not at all easy. This is an unknown country, where people look at you with suspicion and don't like talking to you,” she says.

“I’ve worked here as a cleaner and I’ve been exploited. That caused me a lot of emotional pain; I felt sad and defeated. I didn't want to work because of the experiences I had − I was afraid that they would do the same to me again. I came to MSF to ask for advice on enrolling my children in school and I was able to talk to the psychologist. Since that day I haven't wanted to leave here.” she says.

Colombia still offers a better life than Venezuela - but only just

Despite all the hardships and risks they face, many of the migrants feel that their situation is preferable to returning to Venezuela.

“Colombia offers them the basics, which are better than there, such as reasonably priced food or access to medicines and emergency health services. But that is by no means enough for them to have a decent life in this country and that’s why it’s necessary to increase the resources needed to assist them,” says Sebastián García.

As she waits for the crisis in her country to be resolved and without enough support to survive in Colombia, Maria has no choice but to remain at her crossroads.

“What I would most like is to go home, but how am I going to do that if it’s so hard that you can work day and night and still not have enough to eat?” she asks.

MSF is providing medical and mental health care for Venezuelan migrants and asylum seekers in Colombia in the departments of Norte de Santander, Arauca and La Guajira. An estimated 1.6 milion Venezuelans have fled their country to settle in Colombia. This number is likely to increase in the coming months.

our work in COLOMBIA >