10th May, 2022- Between 25 February and early April, the town of Hostomel, on the outskirts of Kyiv, was the scene of brutal fighting and for a time was under the control of Russian forces. “From the first days of the war, when hostilities began on the territory of the Hostomel community, it was just awful. There were a lot of injured people. Shrapnel wounds, contusions – such types of injuries,” Dr Olena Yuzvak remembers. “People were scared. They had to be reassured. They just didn't know what was going on. We were not ready for the situation that happened”. 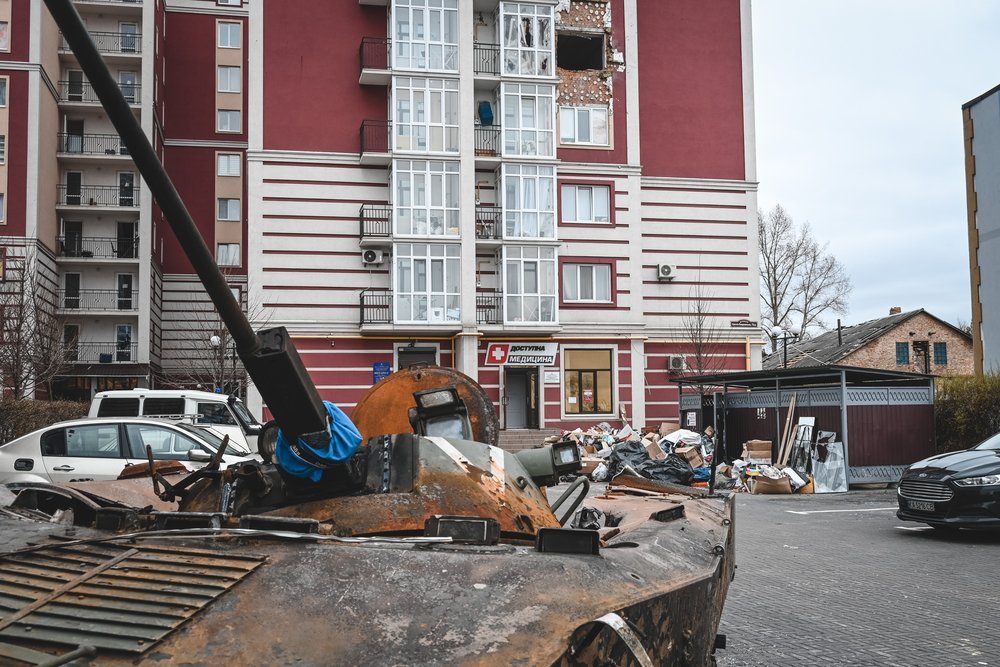 Through the following weeks, Dr Yuzvak did everything she could to keep providing medical care. “All the time we were under occupation, the soldiers sat here in the outpatient clinic. I did not move around the community because it was very dangerous. People came to my house. 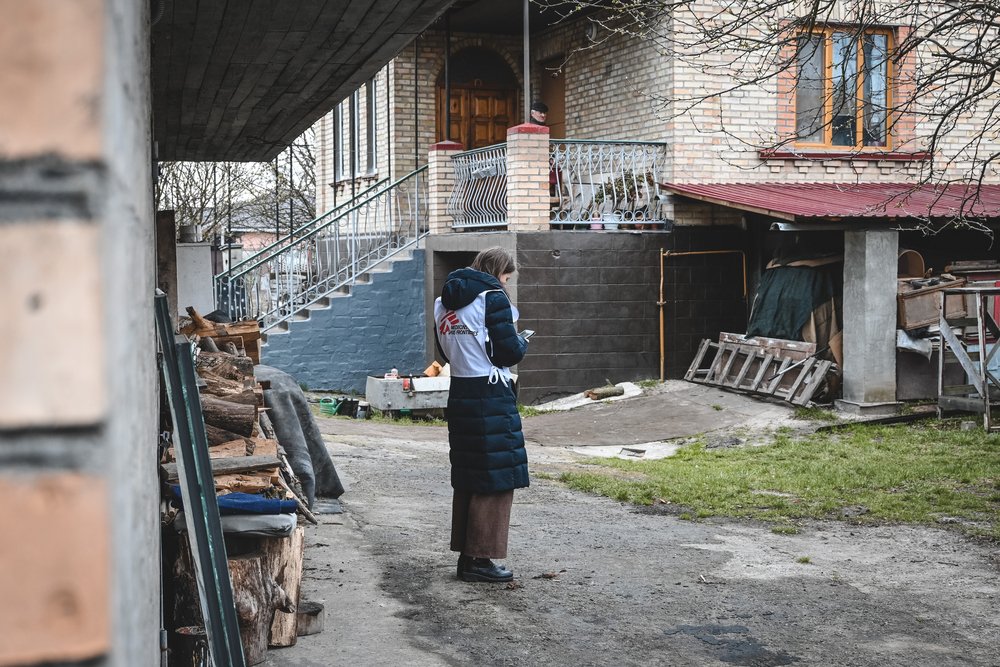 Neighbours brought medicine and I had some stock of certain medicines. We cut them up with scissors and distributed them as needed. Some people needed antibiotics; others took anti-hypertension drugs. We managed with what we had,” she recalls.

When the fighting ended and Russian troops withdrew from the area, the damage to civilian infrastructure was extraordinary. “I remember we went the first day and we were in the car and nobody was speaking. It was incredible what we were seeing." 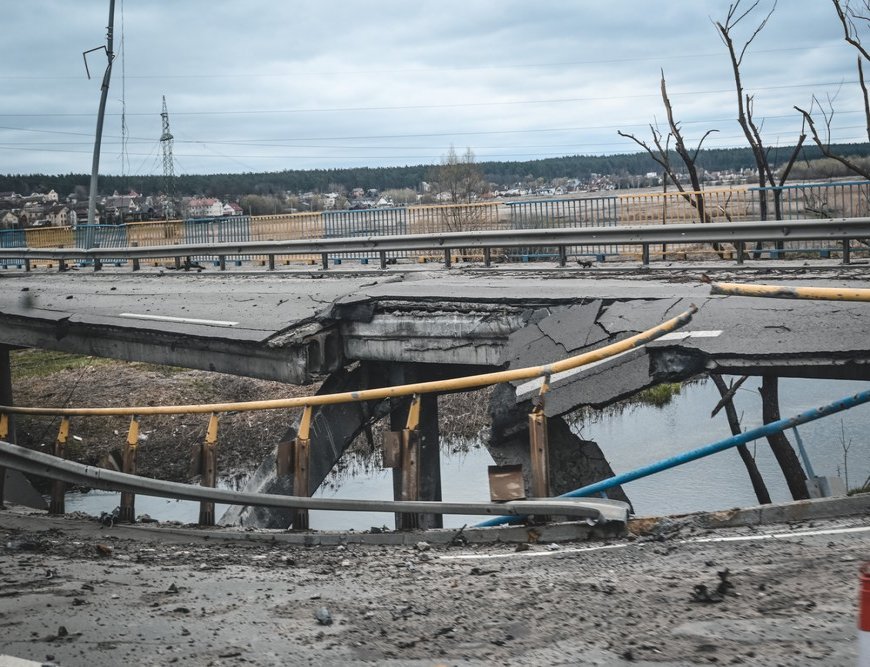 Maurizio Debanne/MSF
Fierce fighting caused extensive damage to buildings and infrastructure in and around Hostomel. (April, 2022).

"All these tanks, the [burnt-out] cars. And the destruction … it’s unimaginable. People then started asking: ‘How are you?’ ‘I’m still alive but not my husband, not my son’. It was real at that point. Until then it was like a movie – it didn’t seem possible,” recounts MSF emergency coordinator, Anja Wolz.

As soon as it was relatively safe to do so, an MSF team began to work with Dr Yuzvak and other medical professionals to restart medical services in Hostomel. “The first week we made home visits. We were accompanied by a doctor, Rachel, who helped people deal with basic complaints, such as insomnia." 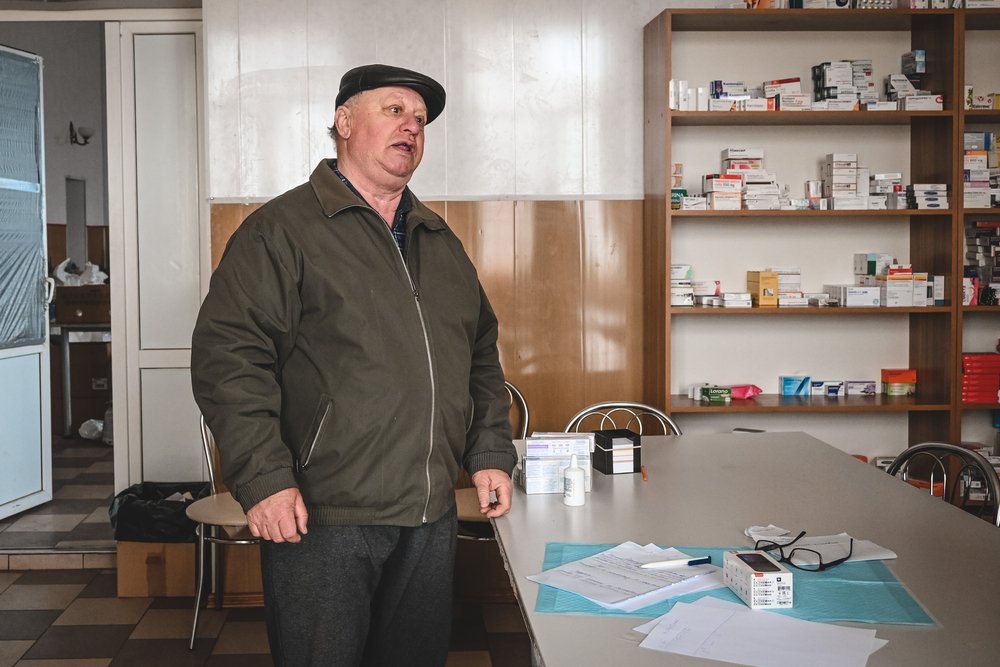 Maurizio Debanne/MSF
Pneumonia was also common after spending extended periods of time in basements in the cold, winter weather. (April, 2022).

"People were very happy to see us; they could not believe that they were now relatively safe… and that someone could provide them with medical care. Now more and more doctors are returning. We are now helping patients with emergency care and providing doctors for local clinics,” says MSF team member, Kateryna Kycha.

Dr Svyatoslav Adamenko – who grew up in Hostomel – came back to help. “Those who did not leave Hostomel during the fighting are mostly elderly people or people who are seriously ill and did not want to go. 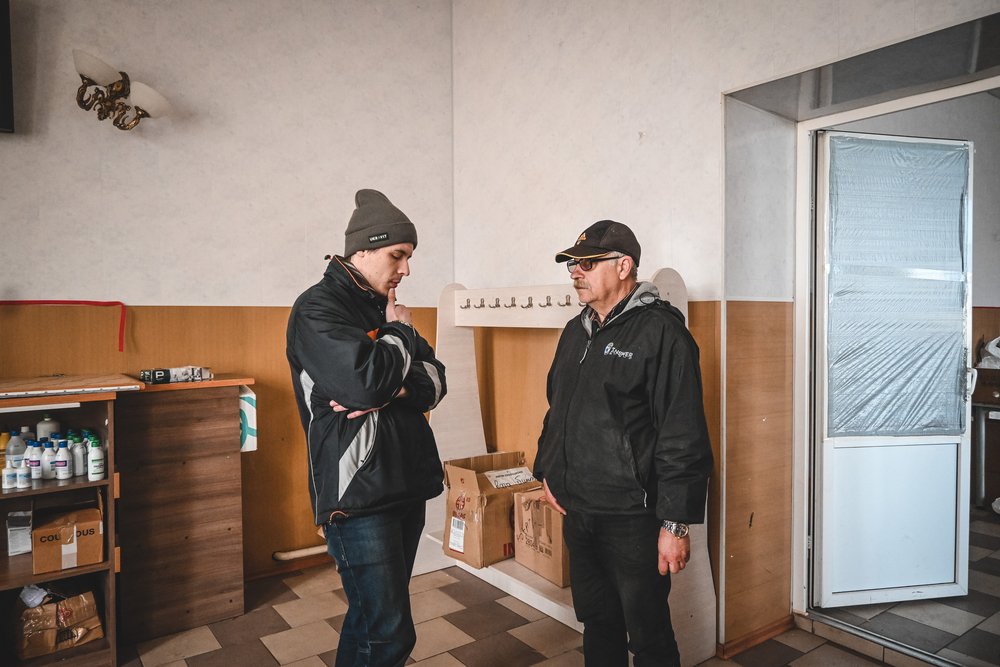 Maurizio Debanne/MSF
Many of the patients MSF teams have assisted in Hostomel suffer from chronic diseases. (April, 2022).

Medical care and medical questions are mainly about chronic diseases - hypertension, asthma, sometimes pneumonia [because people were living in basements in cold weather]. I have seen a few acute patients who need to be hospitalized. There was a man, a grandfather, with a muscle tear. He lay for two weeks, then was evacuated. We do not have the capacity to help him here now,” he says.

The MSF team includes a psychologist, Yulia Korzh, who sees more than ten patients a day, conducts group counselling sessions and responds to individual requests. She quickly realised that many of the patients the teams were seeing would need psychological support. 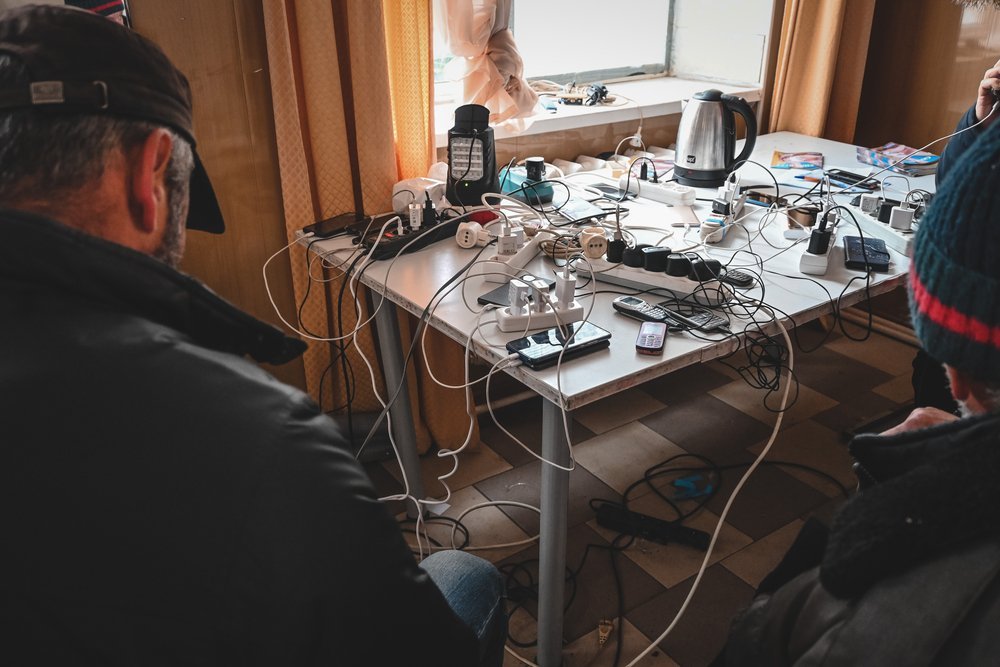 Maurizio Debanne/MSF
The health centre in a village near Hostomel became a place where people could gather and recharging their mobile phones, while they waited for electricity to be restored. (April, 2022).

“There were mostly elderly people, over 60 years old. At first I thought that psychological support for the elderly is not needed because they can do it themselves – they are strong, they can do anything. But being here, I realized that they need to talk, speak out, tell their stories. people need to listen and be with them and communicate. And then a person begins to reveal their problems and say what is necessary, begin to communicate more deeply. When you start communicating, you realize that there are psychological issues that need to be addressed.”

Korzh remembers one patient who had to have his fingers amputated. “He felt phantom pain and complained about how to live on, how to work on. He is a programmer and needs these fingers to work. We were looking for a way out that he could find a job – an alternative that he would like. He will have to live without fingers and adapt to this reality.” 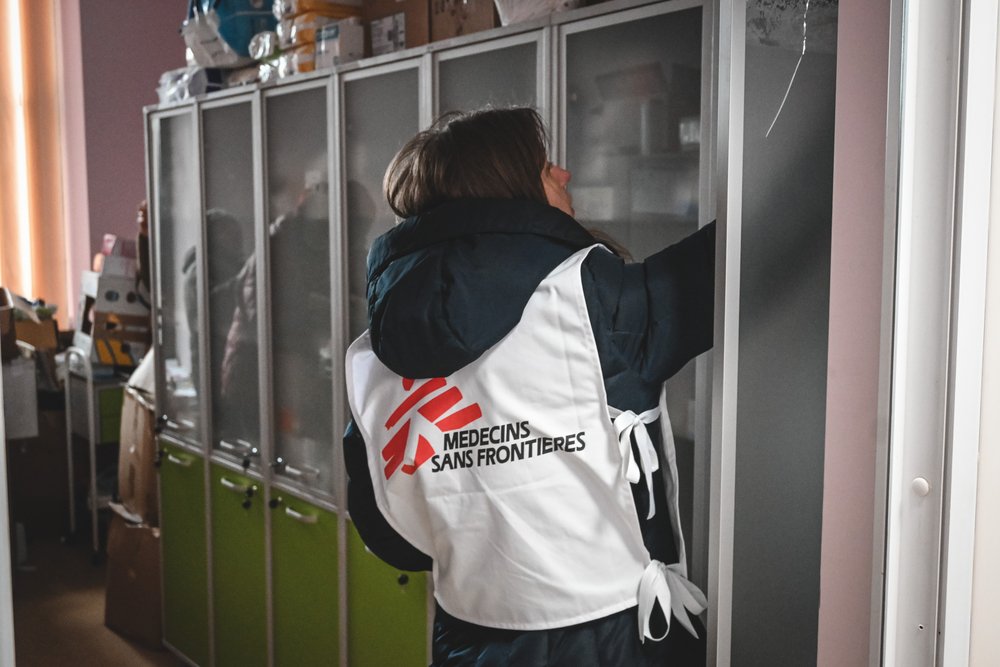 People are slowly returning to Hostomel and crucial services such gas, water and electricity are being restored. Volunteers have cleaned up and the city is starting to return to normal. Healing will take a long time and the war is not yet over. But Ukrainian medical staff continue to address the urgent and more long-term medical needs, including mental healthcare. “I'm not alone now,” says Dr Yuzvak. 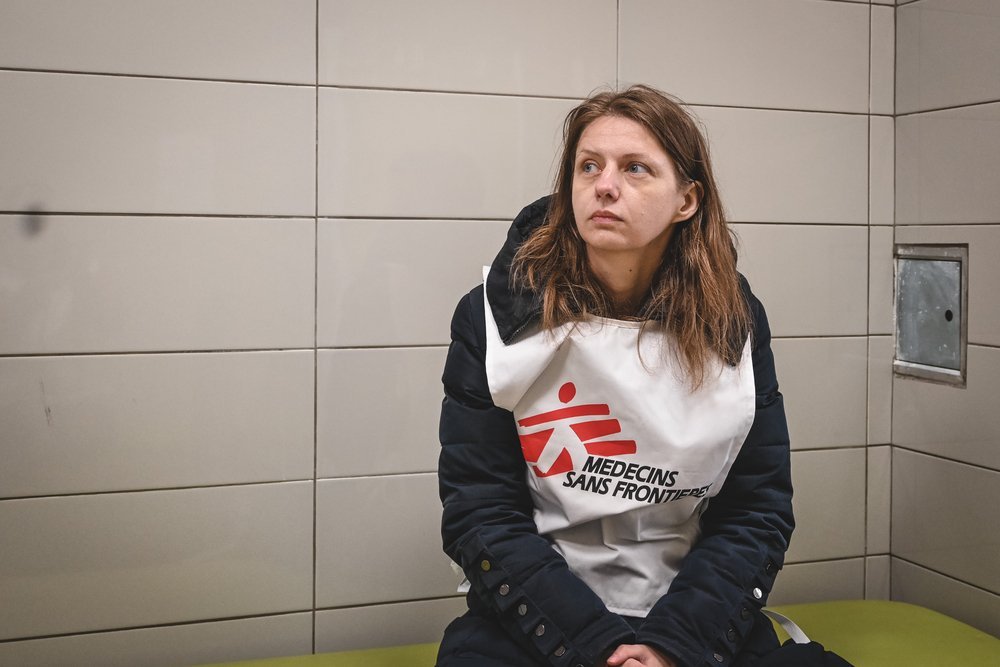 “We have a team of people, a team of doctors. We all work together. There is no such thing as one doctor doing one job alone. Today we had an outpatient clinic in one of the town’s health centres. We cleaned it because it was dirty. There was blood, garbage; we sealed the windows. The minimum comfort that could be brought to this day, we have brought. We are improving every day.”