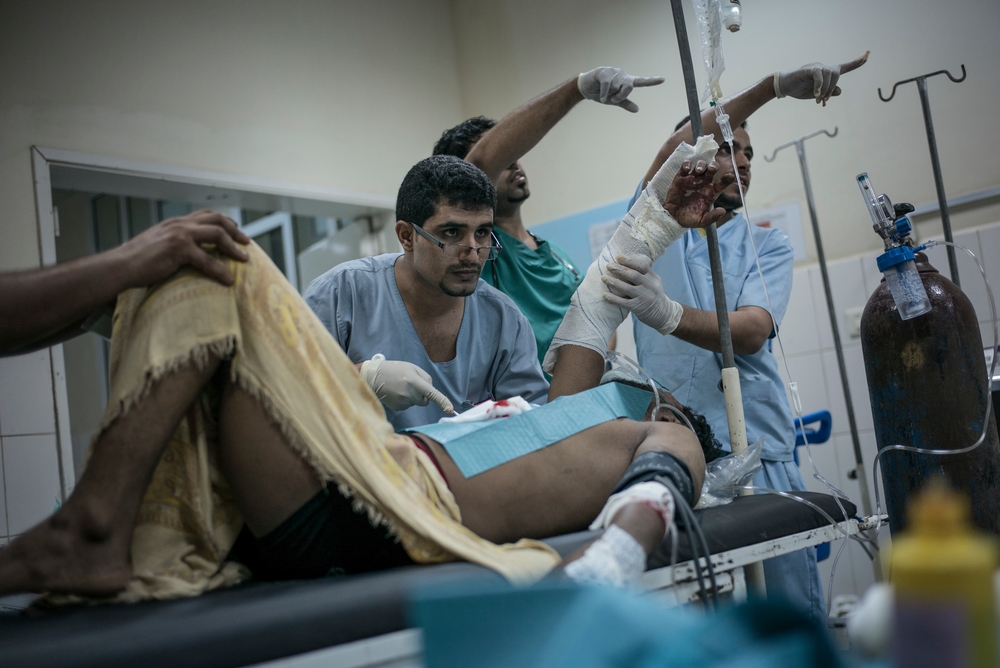 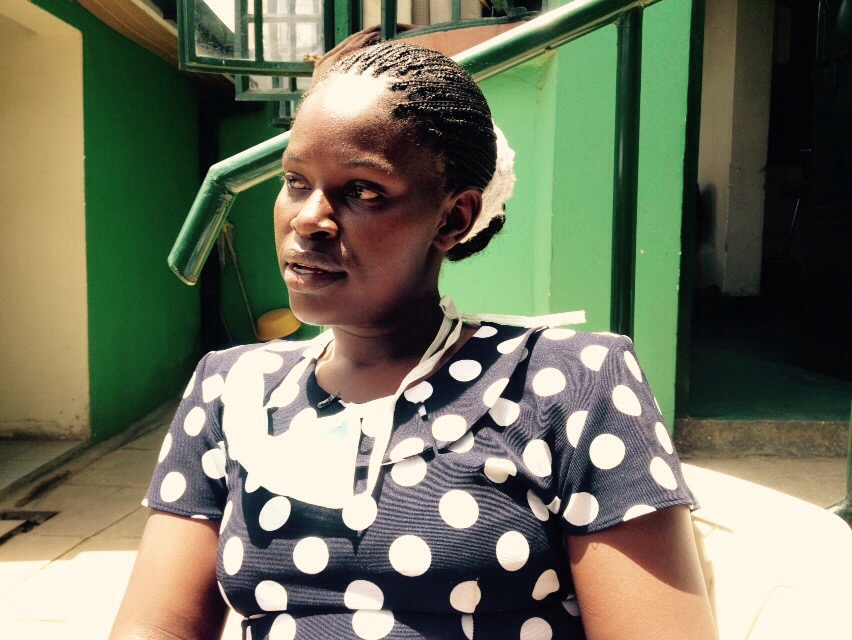 When I flew into the Yemeni capital, Sana’a, from Djibouti, the sides of the runway were littered with destroyed aircraft, large and small – this was clearly a country affected by war.

On the seven-hour drive to Taiz, we passed old stone houses built into the sides of mountains with seemingly normal country life going on in the small villages, and I wished I was visiting Yemen as a tourist.

But the conflict, which has been ongoing for almost two years now, is impossible to ignore: we passed through more than 30 militarised checkpoints, and saw broken down bridges, destroyed overpasses and pieces of shrapnel everywhere.

Find out  more about MSF's work in yemen

In Taiz itself, large parts are heavily affected by the war with empty streets full of barricades, destroyed buildings, bomb craters and an active frontline running through the city.

At that time, the MSF house and office were quite close to the frontline, and you could hear shelling and airstrikes throughout the day and night – you very quickly get to know the direction of the shelling. Since then, we’ve moved to live in the hospital building. 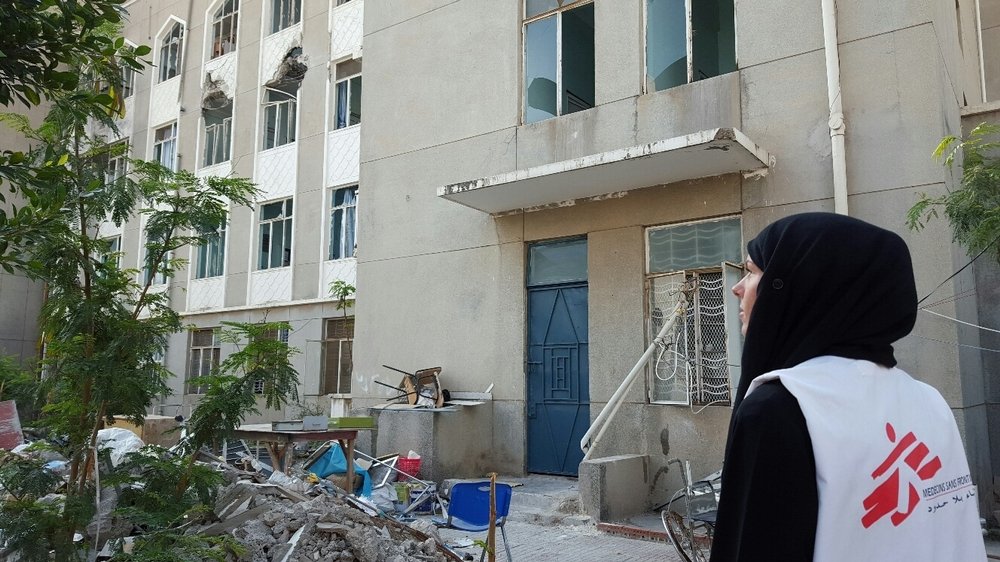 I couldn’t help but think about the people living in this situation for much longer than I have, trying to get on with their normal lives amidst conflict and fear.

The markets are running, there are people in the streets, but you never know when and where there’s going to be an airstrike, shelling or stray bullets. It’s very sad to think about the fear that they are forced to live with.

One of MSF’s activities in Taiz is running a mother and child hospital, in a building originally intended as a hotel and shopping mall. Our focus is on children under five and reproductive health services – we do caesarean sections, deliveries, antenatal and postnatal care, family planning, nutrition, neonatology, and paediatrics.

It’s very well-attended, as most people can’t access these free services anywhere else.

It’s amazing to see the dedication of the local health staff. The war is affecting them and their families and yet still they show up for work, sometimes crossing frontlines to get there
crystal van leeuwenmedical team leader

I’ll never forget the first set of twins delivered at the hospital. They were the first critical neonates we had. They were born at just seven months to a young first-time mother, and were small enough to hold in the palm of my hand. Because they were so premature, the chance of their survival was low, but the staff were set on saving their lives.

We used a ‘baby warmer’ – a bed with a heat lamp on it – to keep their body temperatures stable. It was very touch and go – we had to resuscitate them many times.

But seven weeks later we discharged two very healthy twins, Ola and Osman. Their parents were so appreciative – it was a joy to see the satisfaction on their mother’s and father’s face as they left the hospital.

Twelve-year-old Ibrahim lies in bed looking at an X-ray of his body, clearly showing a bullet lodged along his spine after he was hit in the neck by a gunshot as he left a mosque in Taiz, Yemen. More than 1,620 people have been injured in two months during the so-called ‘ceasefire’. More than half are civilians. © Crystal van Leeuwen/MSF #DoctorswithoutBorders #MSF #Taiz #Yemen #Xray #gunshot #bullet #boy #child #ceasefire #violence #conflict

On the other side of the frontline crossing the city, we are providing similar services by supporting a Ministry of Health facility for reproductive health as well as a paediatric hospital.

On both sides of the frontlines we support or run trauma emergency rooms where we treat patients with injuries caused by the conflict.

One day in mid-August, after the peace negotiations broke down and the level of violence re-escalated, MSF-supported facilities in Taiz received 59 war-wounded civilians, including 19 women and children.

For those who need more advanced or specialised treatment, we help to facilitate their referral to other hospitals. But for many people in Taiz, this is not an option as they are caught between frontlines and they have to make do with the limited health services that are available in the close vicinity.

People’s humanitarian and medical needs across Yemen are so vast. We can very visibly see that there are more needs: for essential relief items for people who have been displaced from their homes by the violence; for primary health and chronic disease care; for lifesaving reproductive and child health, for advanced surgical care and rehabilitation.

But we have to accept that we can’t do everything. We have to choose what we can do well and with limited resources, to give the best possible care to the most vulnerable groups. It’s very difficult to make those decisions, and one of the reasons I found working in Yemen particularly challenging.

In Sana’a, we are running a programme that would normally be outside our comfort zone: dialysis support for renal failure patients. We decided to step in because there was no one else able to intervene as quickly as we could.

Time matters, because if these patients stopped their treatment, they would die. And death from this cause, depending on the course of their illness, can either be very quick or very slow and painful.

These patients have often been displaced from their homes because of the conflict, and then displaced a second time because of their need to find a functioning facility that can take them in – a facility that hasn’t been physically damaged, that has enough medical supplies and that is not so overwhelmed with patients that they have a time slot to take new patients in.

Healthcare in Yemen has suffered, whether it’s preventative healthcare such as vaccination programmes for children, primary and secondary healthcare, or tertiary care such as treatment for cancer or chronic diseases.

The healthcare infrastructure itself has also been heavily affected by the war. Throughout Yemen, hospitals and medical centres are not being afforded the protection they have under International Humanitarian Law.

Many hospitals and health centres have been damaged or destroyed by airstrikes, shelling or shooting. MSF hospitals have been among those affected.

The deadliest attack on a MSF hospital in Yemen was in Abs on 15 August, which killed 19 people and injured 24. Following the attack we made the difficult decision to evacuate our staff from Abs and five other hospitals we support in Saada and Hajjah governorates in northern Yemen, as we considered the risks too high.

Some dedicated Ministry of Health staff remain at the hospitals MSF has withdrawn from, working under unsafe conditions to support their communities. But all over Yemen, both medical staff and patients live with the uneasy knowledge that they are living through a war which makes little distinction between civilian and military targets.

In the public hospitals that are still functioning in Yemen, beds are full – those people who are able come from all over the country to access what medical care is available.  For others, all that remains is private clinics which, in the current economic crisis, people can barely afford.

It’s amazing to see the dedication of the local health staff. The war is affecting them and their families and yet still they show up for work, sometimes crossing frontlines to get there – queuing at checkpoints, crossing no man’s land or braving sniper fire. Often their families have fled to safer areas, and yet still they continue to risk their lives in order to assist their community. It’s an honour to work alongside them.”