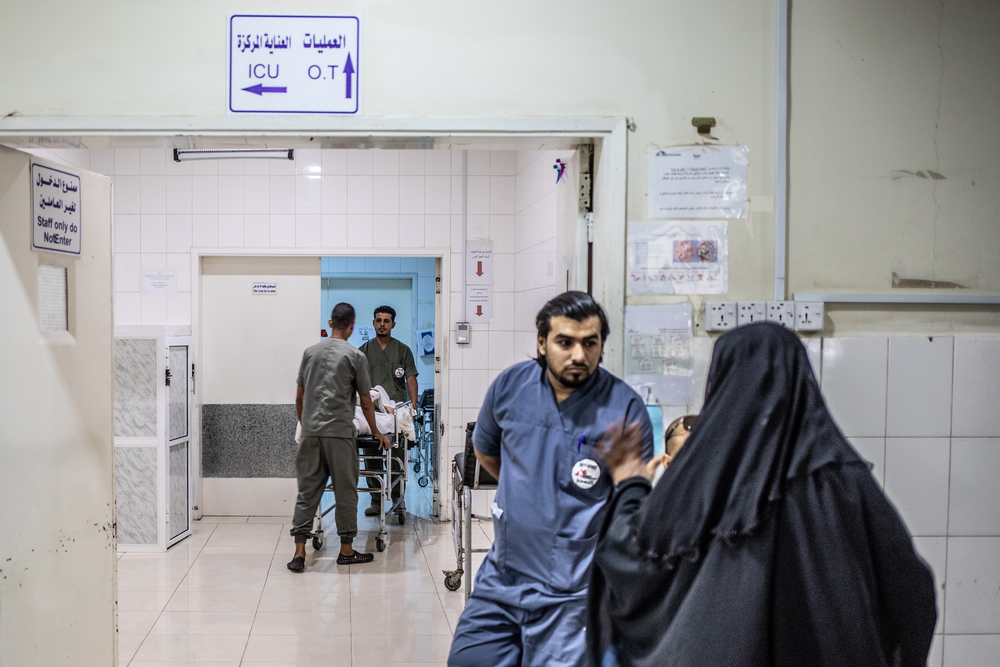 In December 2018, Médecins Sans Frontières (MSF) opened a new emergency room in the Ad Dahi district hospital, which lies around 50 kilometres from the city of Hodeidah. The district strategically lies on the main road to Sanaa, and is surrounded by other districts where people have been severely affected by the ongoing conflict in this part of Yemen.

Fighting in, and around, the port of Hodeidah, and in the neighbouring governorates of Taiz, Hajjah and Amran has also caused many people to flee. Ad Dahi district currently hosts more than 3,600 displaced people, making the new emergency room even more needed in an area that is struggling to cope with the direct and indirect consequences of the war in Yemen.

Omar Abdullah Hager is the patriarch of a family of 49, spread across four generations. The 100-year old was our first patient in at our newly-opened emergency room, having recently arrived from the town of Midman, 25 kilometres away, accompanied by his daughter Eman.

Omar and his family were able to afford the cost of transportation to the hospital, but many others can’t, due to the rising fuel costs, high unemployment rates, and the collapse of the local currency.

If it weren’t for Ad Dahi hospital, Omar would have had to travel to Hodeidah, up to 1.5 hours away but closer to the frontline.

"People in this area are very poor, and it will make a huge difference for them to be able to seek medical treatment in the district."

Eman says that they heard from the local council about the opening of the new emergency room, and waited at home for two days before they brought Omar in, having suffered from a stroke.

Eman herself is a volunteer at one of Midman’s health units, and understands well the difficulties people have to access health care in this part of Yemen.

“People in this area are very poor, and it will make a huge difference for them to be able to seek medical treatment in the district, and not have to travel too far,” she says. “Eventually, you can even serve other nearby districts too.”

The health system in Hodeidah, shattered by the ongoing war and blockade, has been unable to cope with the medical needs of people living in the districts outside Hodeidah city, particularly since the beginning of the battle for Hodeidah city and its port.

Our current project in Ad Dahi consists of an emergency room unit in the hospital, with the view of establishing a surgical room, an intensive care unit, and an in-patient department. MSF teams are working to finalise the renovation of the hospital to be fully operational very soon.