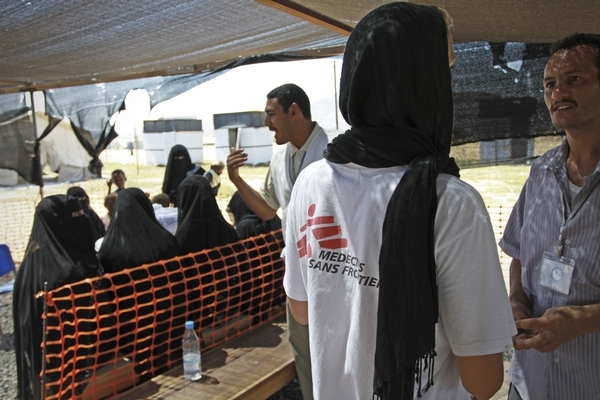 Yemen: MSF responds to the consequences of violence in the South

In southern Yemen, where political tensions and clashes continue, MSF is continuously adapting its activities to ensure access to healthcare for wounded people and life-threatening cases.

The organization is involved in two emergency care facilities, organizes the transfer of injured people to Aden, and provides primary care and hospitalization for the population in parts of Aden, Abyan and Lahj governorates.

For more than a year, southern Yemen has been affected by a wave of violence, causing many injuries and affecting the ability of the healthcare system to cope with needs.

In recent months, MSF has provided financial support, human resources and medical supplies to two emergency rooms in the region and a private hospital in Aden, to allow free-of-charge access to healthcare for violence-related medical and surgical emergencies.

The context is volatile and changing, and requires the organization to constantly redefine where and how to intervene, both to get closer to the patients in need and ensure the safety of medical staff.

Aden, the main town of the region, is agitated by political tensions. Demonstrations take place on a regular basis, with clashes between demonstrators and security forces sometimes erupting.

During one of these on January 13, at least five people were killed and dozens injured. MSF intervened to help provide care to injured people in a private hospital in the city, where 36 patients were received, including 13 patients with gunshot wounds who required surgery.

Referral of wounded from fighting areas

In the region of Abyan, east of Aden, there has been a relative lull in the fighting between Yemeni security forces and armed Islamist groups in recent weeks. Medical needs remain high however, and many health facilities have been damaged by the fighting while others remain inaccessible.

Given the impossibility for teams to access areas where the fighting is most intense, MSF has set up a system to transfer the wounded from Jaar, about 70 km northeast of Aden. More than 1500 patients have been stabilized in a health clinic supported by MSF in the city. Of these, over 200 have been transferred by ambulance to Aden to access free surgical care and hospitalization. With the support of MSF, 3225 patients were also able to access a consultation and treatment.

Further east, the organization has made two donations of medicines and medical supplies to the emergency room of the hospital in Lawdar. As an outbreak of measles cases has been reported in the region over the last few months, MSF has provided drugs to this hospital to treat this disease.

In the city of Al-Daleh, north-west of Aden, MSF is directly involved in the emergency room of the district hospital, through financial support, human resources, medicines and medical equipment. Since August, more than 4400 patients have received emergency care and 120 have been transferred to Aden.

In Al-Hosn town, east of Aden, MSF has been working since May 2011 in response to the deterioration of the public health system in the governorate, caused by the violence. In cooperation with the Ministry of Health office, an MSF team is supporting a primary health unit in the town, providing health care for the local population and the hosted internally displaced persons.

MSF is also working in Lahj governorate, east of Abyan, where the population is affected by regular fighting between different armed groups. Since July 2010, an MSF team has been providing medical care in Radfan district public hospital, which serves as a referent medical structure for four districts of around 160,000 people. MSF is supporting the emergency room, surgery, and inpatient wards, as well as the medical lab and pharmacy.

Finally, MSF is supporting the activities of three outpatient clinics in the city of Aden, and plans to provide support for a fourth, to improve access to primary care for the resident population and for the tens of thousands of people displaced by the conflict in Abyan. More than 6000 people have benefited from these services since last July.

In addition, teams are now working to open an emergency surgical care facility fully managed by MSF in the city, primarily intended to receive violence and trauma related cases.

MSF has been working in Yemen since 1994 and continuously since 2007. Today, the organization conducts medical and surgical activities in the governorates of Amran and Hajjah in the north of the country, as well as in Lahj, in the South.
In late September 2011, MSF had to suspend its activities in the governorate of Saada, following the introduction of new working conditions by the de facto authorities in the region.
Today, more than 300 national and international MSF employees are mobilized in the country, and more than 100 Yemeni staff of the Ministry of Health are involved in the implementation of activities.
MSF is a private humanitarian international organization providing emergency medical aid in more than 65 countries worldwide. For its activities in Yemen, MSF does not accept funding from any government and chooses to rely solely on private donations.