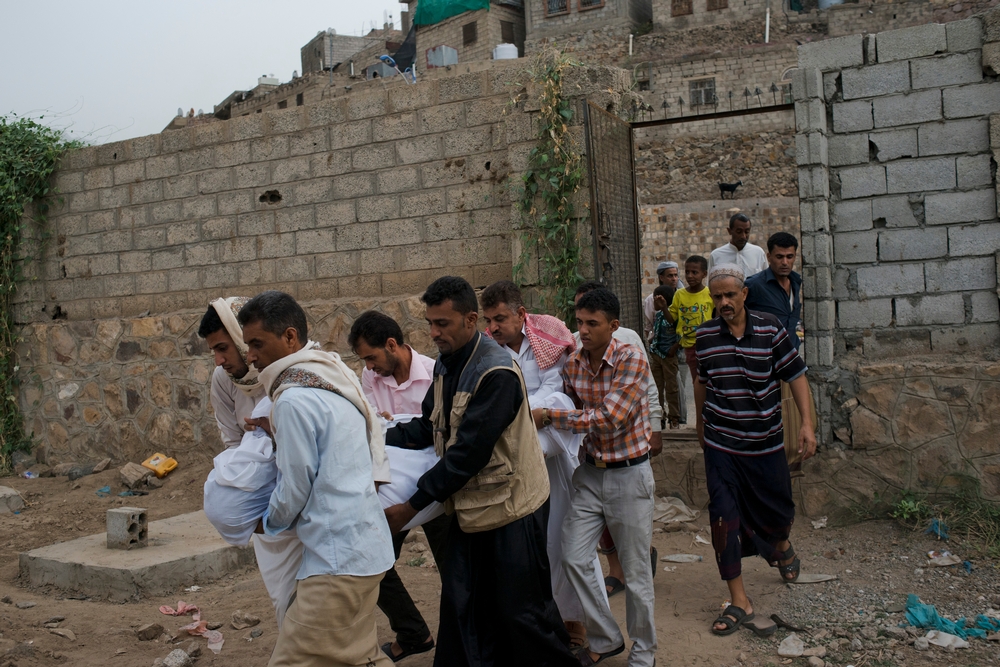 “More than sixty-five civilians in the province of Taiz, Yemen have been killed in Saudi led airstrikes today, including 17 people from one family. The deaths occurred when the strikes hit civilian and homes in the area.

Those who survived the bombings are searching through the rubble with their bare hands in the hope of finding survivors, as well as the bodies of victims of the attack. Many others are believed to have been injured or killed in the past week in airstrikes, shelling and fighting in densely populated areas.”

“Patients and MSF staff are unable to reach hospitals due to the heavy fighting and airstrikes in Taiz. Of the twenty hospitals that existed in Taiz, only seven are still able to receive wounded and are caring for a population of over six hundred thousand people.

These seven hospitals are totally overwhelmed with wounded patients and have run out of essential medication.

At the same time, we also know that many people are not able to reach the hospitals due to the heavy fighting. Medical teams are also having trouble reaching the hospitals because the roads are too dangerous due to the intensity of the fighting.

“We understand that during this most recent airstrike 17 houses were hit and more than sixty-five people are believed to have died, among them at least seventeen children and twenty women.

Twenty-three people were injured and were brought to one of the MSF supported hospitals which are partially functioning.

It is very frustrating that people are dying in the streets of Taiz and our teams are unable to reach injured people. MSF is trying to provide first aid kits to nurses and doctors so they can treat injured people who are not able to reach the hospital, but we know it is not enough.

The medical team inside the Al Rawdah hospital is doing what they can but the numbers of patients keep growing and essential treatments and materials, such as anesthetics and infusions are no longer available.

Since March, MSF-supported hospitals in Taiz have treated more than 4,300patients. Since the 18th of August, 923 wounded people have managed to reach the hospital. Sadly 133 of those died due to their severe injuries.

Many more victims have not been able to seek treatment because of snipers and airstrikes.  In the past two week the fighting has intensified and the ability to transport medical supplies to replenish stocks in hospitals has been extremely difficult.”

"If the warring parties continue to carry out heavy shelling and airstrikes, more people will die.  We call on the warring parties to stop attacking civilian targets, especially hospitals, ambulances and densely populated neighborhoods and allow medical personnel and humanitarian organizations to provide assistance.”