January 31, 2022- “We don’t have blankets to cover ourselves,” says Aafia, one of thousands internally displaced people sheltering in Yemen’s Marib governorate. “My children have no warm clothes and I don’t have enough food to feed them. I don’t have a house made of bricks; it’s only a tent, which doesn’t even stop the wind during cold winter nights. I don’t complain though. A complaint to anyone other than God is a humiliation.” 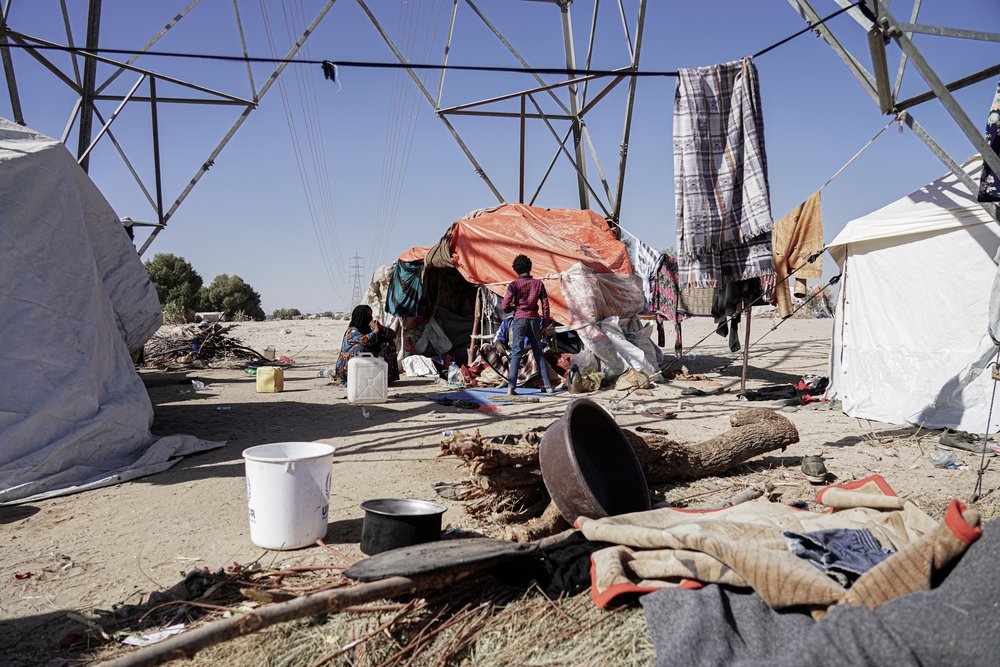 The scene in Marib is a gloomy snapshot of how millions of Yemenis are suffering as a result of the seven-year-long conflict.

About 150 formal and informal sites, both large and small, host thousands of families who have sought safety in Marib from across the country. An even larger number of displaced people are staying at the homes of local people. 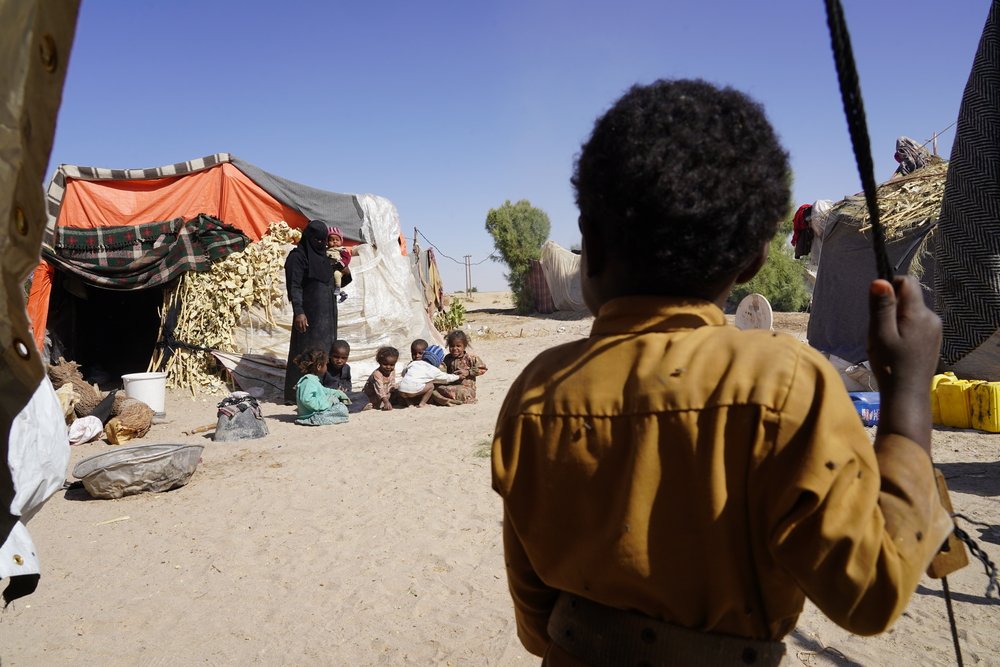 As the conflict spread, Yemenis from across the country migrated to Marib, previously considered as the safest place in the country.

Development to infrastructure and increased economic opportunities over recent years had also made Marib an attractive location to move to. 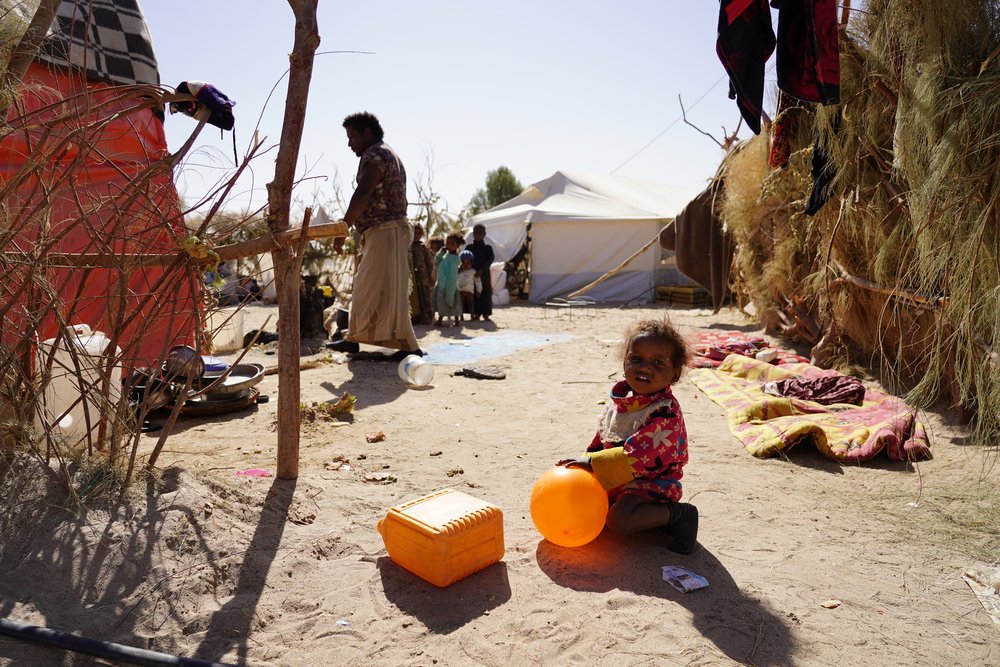 Hesham Al Hilali
A girl plays next to her family’s tent in Al-Khuseif camp for internally displaced people in Marib. (December, 2021).

Today however with the escalation of conflict, the situation in Marib has changed according to the many displaced people.

Violence in Marib governorate is intensifying as the warring parties fight to claim their control over an area that is important for its geographic location, oil and gas resources and military weight.

For many of them, Marib can offer nothing more than a life in precarious conditions

A city with a former population of less than a half million, according to local authorities, is now home to close to three million people. 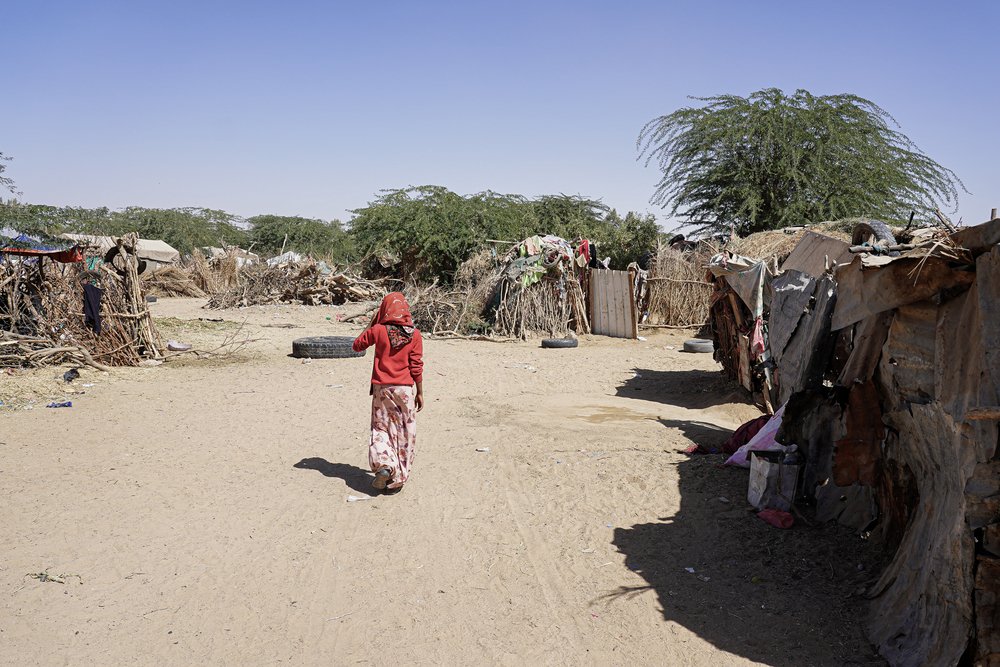 Hesham Al Hilali
The Al-Hussun area in Marib hosts people displaced by the conflict from all over Yemen and members of the Al-Muhamasheen, (‘the marginalized ones’), a vulnerable minority group spread across Yemen. (December, 2021).

For many of them, Marib can offer nothing more than a life in precarious conditions.

Most of the displaced people are totally reliant on humanitarian assistance, although it does not always reach them.

Abdu Sabit is one of many people waiting for humanitarian assistance to arrive.

He has no means of earning money to support his extended family of 31 people, who share two small tents in Marib’s Al-Khuseif site. 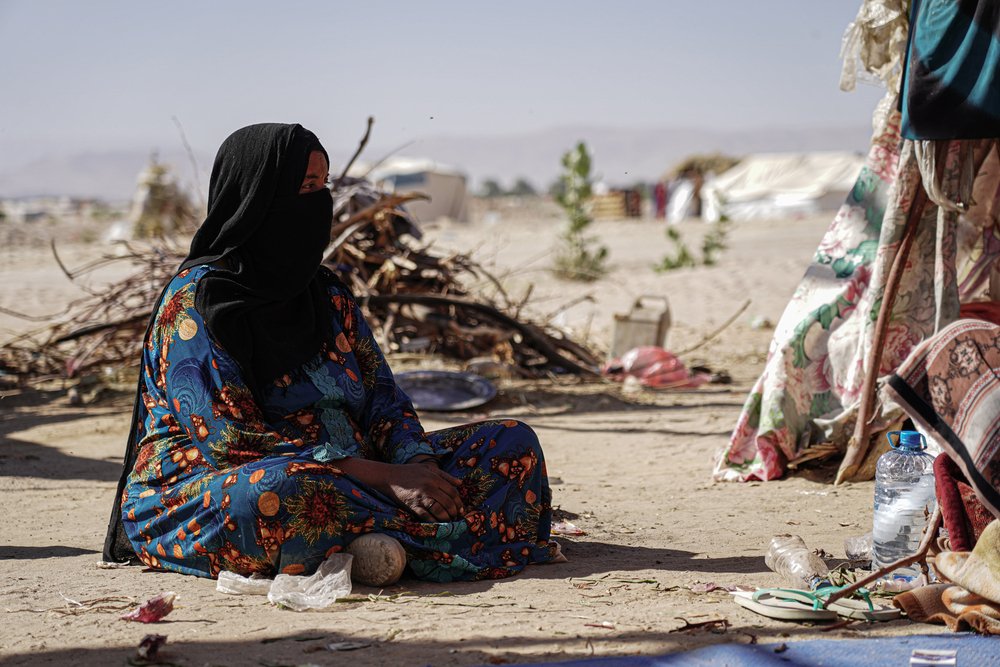 Hesham Al Hilali
Abdu Sabit sits outside her tent at Al-Khuseif camp for internally displaced people in Marib, Yemen. Her 31-member family lives in two tents a few kilometres away from the frontline of the ongoing conflict in Yemen.

“We only take tea and bread all day long,” says Abdu, who is originally from Taiz and has been displaced twice already.

“It has been a month since I and my family had a proper meal. We would take anything given to us as help.”

Getting hold of enough to eat is not the only problem faced by the displaced people.

“It has been a month since I and my family had a proper meal. We would take anything given to us as help.”

Many of those living in camps set up in and around the city lack basic necessities including shelter materials, blankets, clean water and latrines.

Many of the temporary shelters have been constructed from bushes and branches plucked from the desert, or from plastic sheets or other fragile materials salvaged from rubbish dumps. 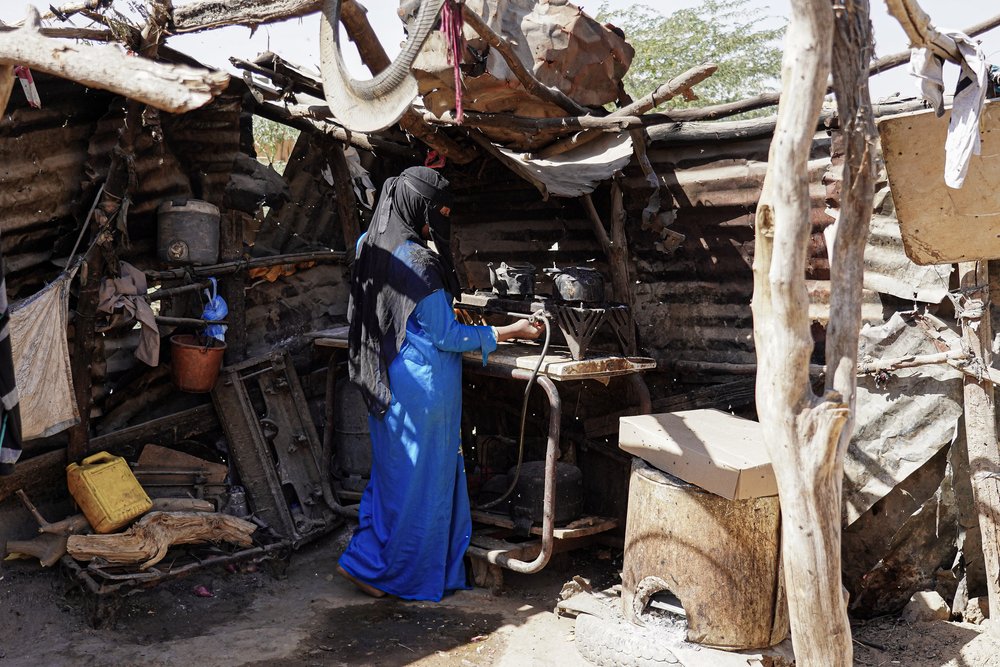 Hesham Al Hilali
A woman preparing food in a self-built makeshift kitchen next to her tent in Al-Hussun camp for internally displaced people in Marib, Yemen. (Decemberm, 2021).

Safe drinking water is either scarce or available in very limited quantity. In this dusty and sandy environment, many people live without latrines and showers.

Winter in the desert of Marib is merciless with strong cold winds and temperatures falling below 10°C.

Without mattresses to sleep on or blankets to cover themselves with, many people struggle to keep warm. 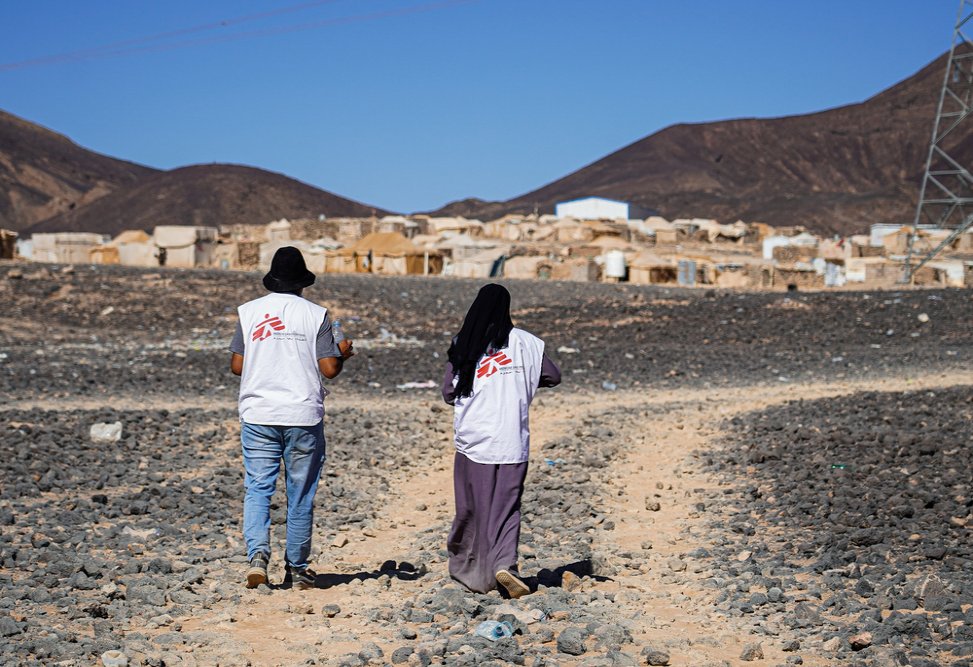 Some have built walls of sandbags to try and prevent the cold wind from entering their homes.

The precarious and unhygienic living conditions and the lack of safe water are a major health risk.

Teams from Médecins Sans Frontières/Doctors Without Borders (MSF) have been providing basic medical services through eight mobile clinics and a primary healthcare centre.

They have been receiving increasing number of patients, especially children, suffering from diseases related to the poor sanitation and harsh living conditions. 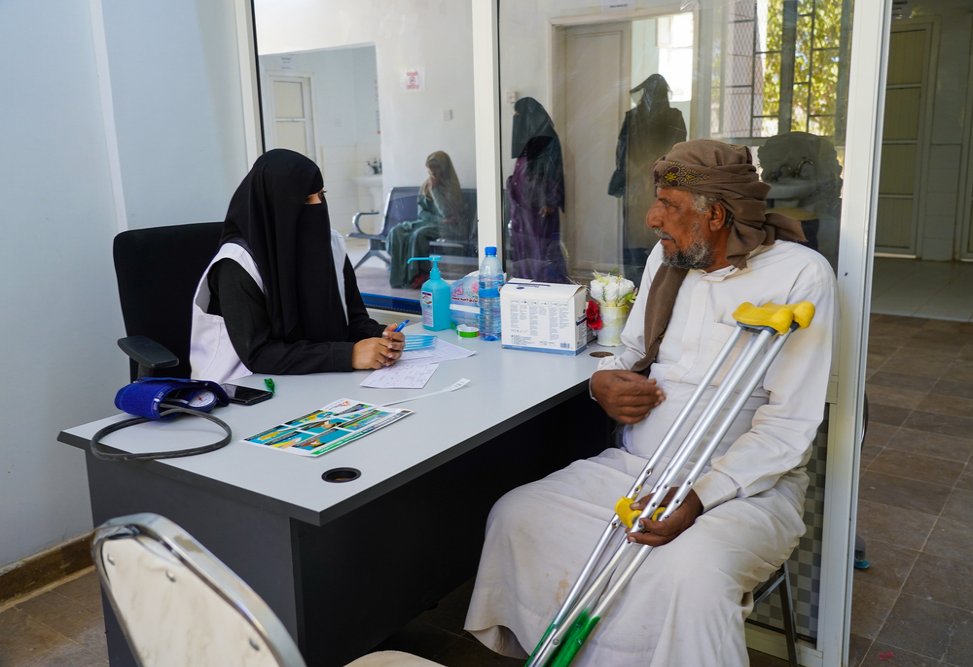 In the three months from October to December 2021, MSF teams saw a 44 percent increase in patients on the previous three months; 66 percent of these patients were children.

“Marib’s humanitarian crisis could result in a health crisis,”

There was also an 11 percent increase in malnutrition cases.

“The consequences of people’s living conditions on their physical and psychological wellbeing are already alarming."

"There is a high risk of disease outbreaks including measles, cholera and COVID-19." 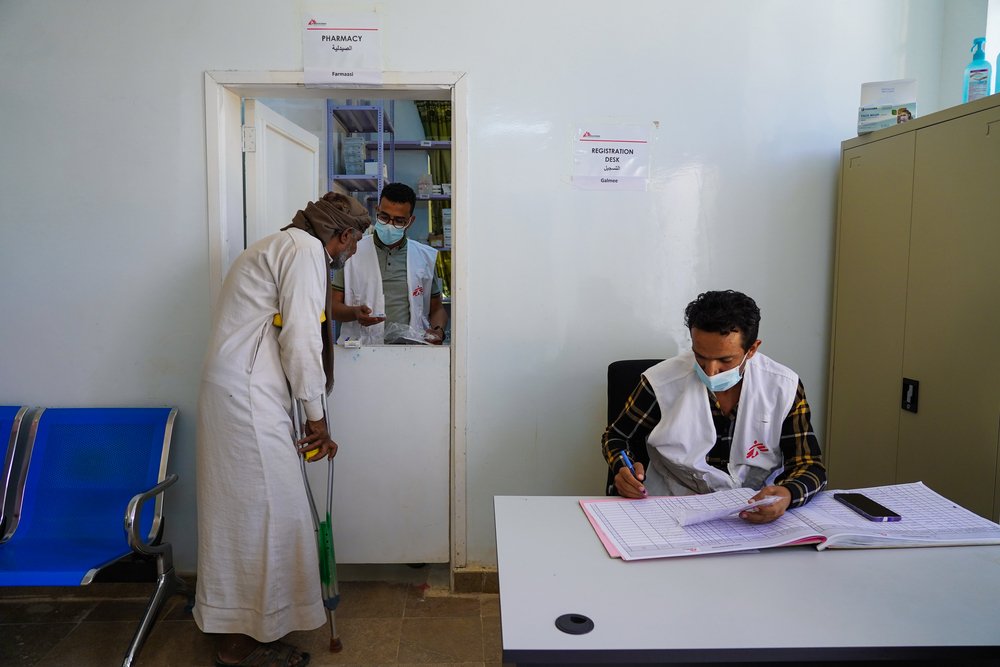 "Organization working in Marib must increase their activities with regards to food, water and sanitation, shelter and healthcare.”

More than 78,000 individuals were displaced within or to Marib governorate last year, out of which around 60,000 were displaced since September, estimates the International Organization for Migration (IOM).

Intense fighting continues on the city’s outskirts, causing yet more people to be displaced from their homes, and presenting a constant threat to those who arrived in the area in search of safety. 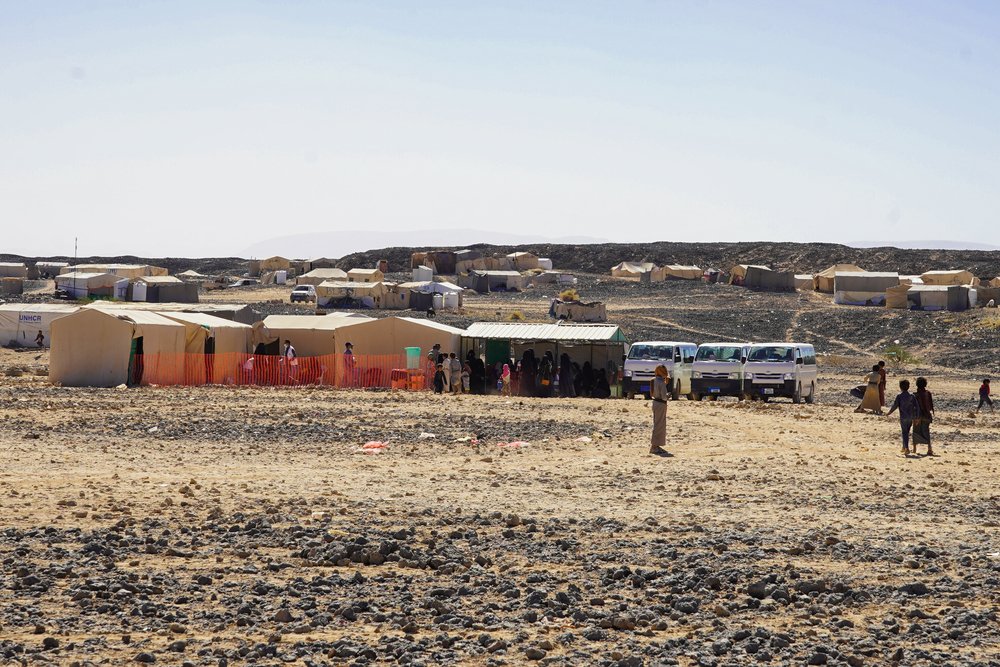 “We really feel afraid, day and night,” says Abdu, whose family are sheltering just a few kilometres from the frontline."

“Usually, there is a break of an hour or so and then we start hearing fighting again. I am not worried for myself, but for the children in my family. If there is a situation when we feel the explosions are coming closer, we will just take some water and run. I don’t know where we’d go – we would just run away.”

Conflict brings more misery to people who are already vulnerable

The effects of the conflict are having a particular impact on two of the area’s most vulnerable groups: African migrants and the Muhamasheen community [literally ‘the marginalised ones’, a minority ethnic group who frequently face discrimination and live in deep-seated poverty]. 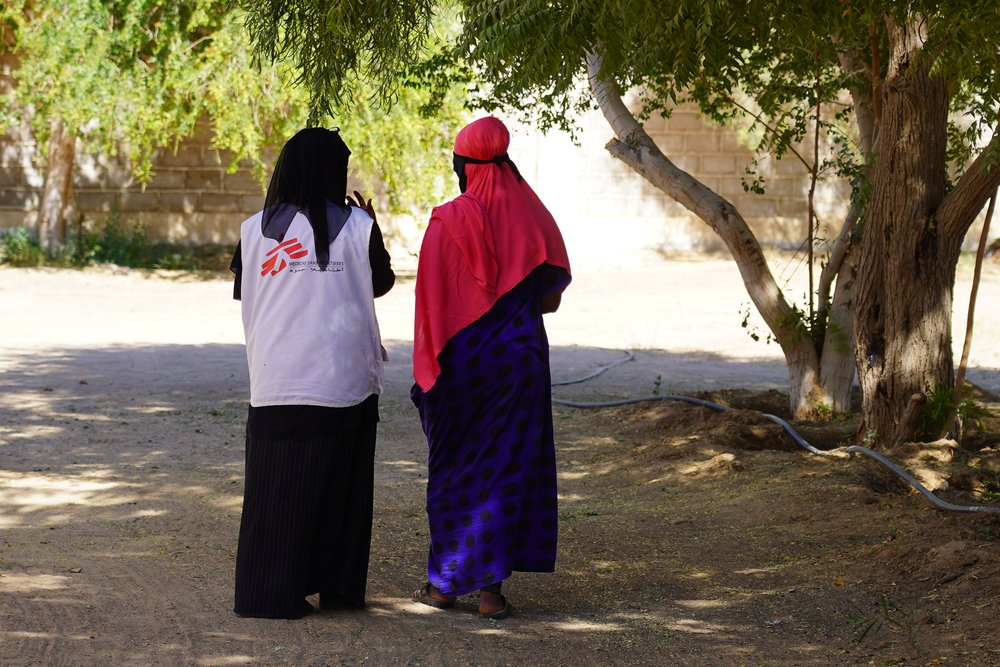 Hesham Al Hilali
Arkani* migrated from Ethiopia and has been stuck in Yemen for eight months on her way to Saudi Arabia to look for work. (December, 2021).

Even when the frontline shifts, putting their lives at risk, these people often lack the capacity and resources to move to safety.

The arrival of newly displaced people in the area is putting Marib under increasing stress in terms of meeting people’s needs for food, shelter, water, sanitation and other basic necessities.

The humanitarian assistance available is insufficient for people’s needs, and many migrants have seen their aid reduced or shared with other vulnerable groups.

“We are 40 women living in one tent,” says 20-year-old Arkani, one of hundreds of migrants from Ethiopia currently stuck in Yemen during their quest to cross the border into Saudi Arabia." 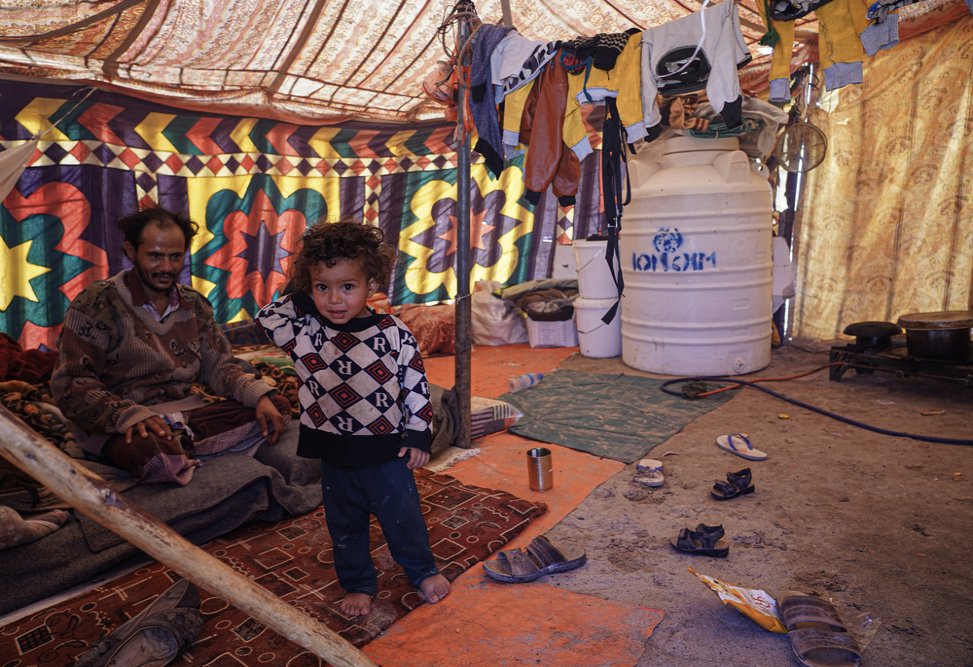 Hesham Al Hilali
Muhammad lives in Al-Khuseif camp for internally displaced people with his wife and daughter in a small tent that includes an area to sleep and to cook and for a bathroom. (December, 2021).

"We don’t have warm clothes, blankets or sheets to survive the cold weather. We are a big number of people and the food is not enough for all of us.”

The conflict and its consequences have also brought more misery to the Muhamasheen, of whom a large number now live in Marib, since moving to the governorate from other parts of the country to escape conflict and look for economic opportunities.

"We are a big number of people and the food is not enough for all of us."

“Food, shelter and water – that is it,” says Ahmad, a member of the Muhamasheen.

“We don’t want to have a big house or buy land. All we need is food, shelter and blankets in winter.”

“Marib is in an emergency situation. The population – especially the vulnerable groups such as displaced people, migrants and the Muhamasheen – are severely affected by the multiple displacements that they have gone through and are surviving without even basic necessities. Aid organisations were simply not ready for displacement on this scale." 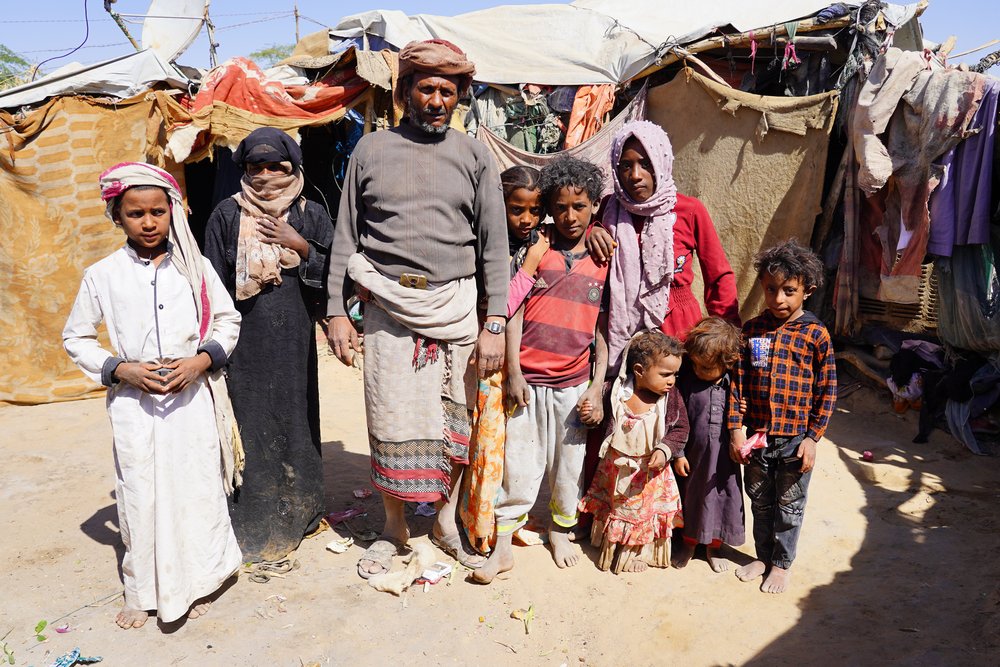 Hesham Al Hilali
Ahmad and his family live in two small tents in the Al-Hussun area of Marib in Yemen. (December, 2021).

"The authorities too, despite their efforts, have a challenge to deal with such large influx of IDPs. The conflict in Marib is unlikely to end soon. We fear more displacement, resulting in more needs. As a humanitarian community, we need to act to address the current needs, while thinking ahead and preparing for a possible increase of needs in the near future,” says MSF head of mission Elisabeth Bijtelaar.

“Marib is a classic example of what the people of Yemen are going through. As the governorate makes headlines because of the security incidents and frontlines, we must not forget that the whole country is suffering from consequences of the long standing war.”