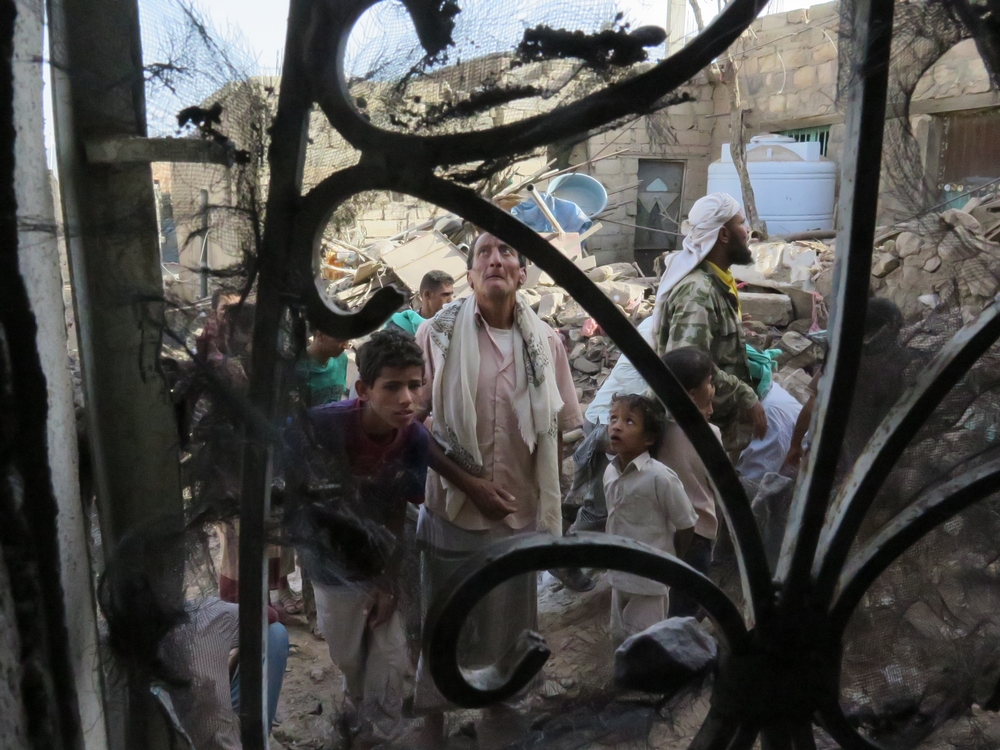 This opinion piece was originally published in French in Liberation on 26 July 2015.

Since the fighting began at the end of March between Houthi rebels and Saudi Arabia led-coalition forces, Médecins Sans Frontières/Doctors Without Borders (MSF) has provided medical assistance to close to 7,000 war casualties.

MSF teams working in Yemen have witnessed pregnant women and children dying after arriving too late at the health centre because of petrol shortages or having to hole up for days on end while waiting for a lull in the fighting. People requiring emergency medical treatment have also died after being held up at roadblocks guarded by combatants. 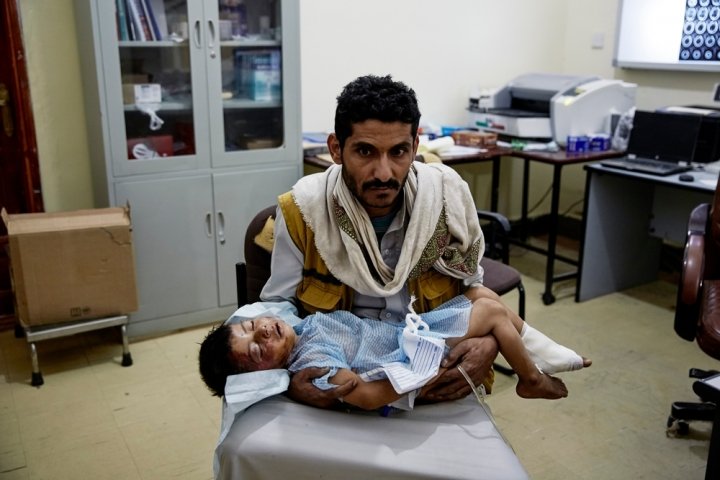 Sebastiano Tomada/Getty Reportage
A father holds his wounded child at the MSF supported Ministry of Health hospital in Sa'ada city.

MSF has also provided care to victims of the coalition bombing ­– at the end of March, when El-Mazraa displaced persons camp in Hajjah Governorate was bombed, wounding at least 34 people, 29 of whom were already dead on arrival at the hospital; at the end of May, when a petrol tanker in the town of Taiz was hit by shelling, leaving 184 people with serious burns, and on 4 July, when its teams treated around 70 casualties in Beni-Hassan in northwest Yemen after several airstrikes had targeted a busy market as the Ramadan fast ended.

Equally belligerent, the Houthis have been indiscriminately bombing densely populated residential areas of Aden for weeks and, on 19 July, as Southern Resistance forces fought to regain control of the town, they pounded a heavily populated area.

Within just a few hours, 150 casualties – women, children and elderly people – poured into the MSF hospital. 42 were dead on arrival and several dozen bodies had to remain outside because there was no more room in the hospital.

Jean-Pierre Amigo/MSF
This water bore hole is the last one working in the whole area - including rural area. Rural open wells are now in use for drinking water as other boreholes - including pumping stations - do not have fuel anymore.

Throughout the country, the population is suffering from severe shortages as food, drugs and petrol become increasingly rare, threatening the survival of the most vulnerable.

With fuel lacking for generators and pumping stations, some hospitals are no longer able to function and obtaining clean water is increasingly problematic. People queue for petrol for hours, or even days, in the hope of being able to flee the combat zone or transport a casualty or somebody sick to the nearest hospital.

The malaria season has begun and suspected cases of haemorrhagic fever are rising. While MSF has managed to obtain the necessary authorisations to bring over 100 tons of drugs and medical supplies into the country, ministry of health facilities and private clinics have not so they are receiving no supplies whatsoever.

As in Aden, the price of flour has increased by 70% in some areas and meat is all but non-existent. Data collected by MSF in Khamir and Saada show that 15% of children are under-nourished.

War crimes and severe shortages result in the population being subjected to double the suffering, caused not only by the different parties to the conflict but also Resolution 2216 (2015) adopted by the United Nations Security Council in April. 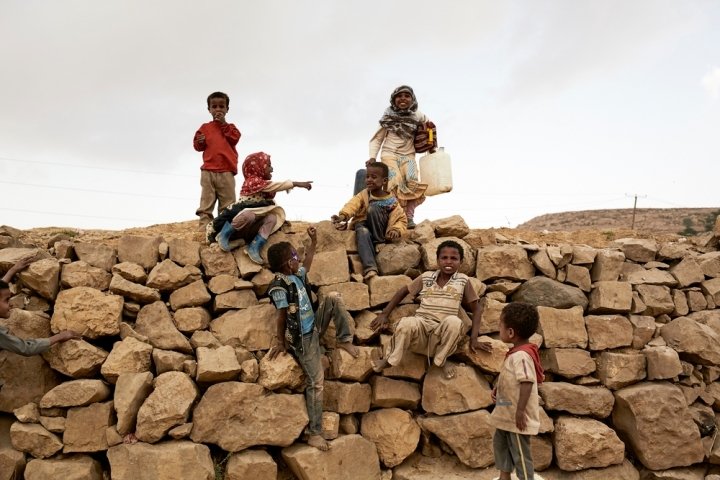 Sebastiano Tomada/Getty Reportage
Yemini children fleeing the war with their families photographed in a temporary refugee camp bordering the town of Amraan in northern Yemen.

Proposed by Jordan and actively supported by the United States, Great Britain and France, the declared purpose of the Resolution under Chapter VII of the Charter was to put an end to the violence in Yemen, by imposing, among others, an arms embargo on the Houthis.

The military coalition was thus presented with a blank check to bomb all infrastructure such as roads, airports, ports and petrol stations that could afford a military advantage to the rebels and impose restrictions on air and maritime trade which have rapidly resulted in isolating the entire country from the outside world.

It is abundantly clear that the Resolution chose the wrong target as, far from “putting an end to violence”, it has fuelled the warring appetites of the various parties to the conflict and tightened the stranglehold on the population.

Apart from only too few convoys, the United Nations – which never ceases to express its grave concern over the humanitarian situation – has not set up a supply line to facilitate transport of basic necessities such as drugs, food and fuel.

In view of what we are witnessing in Aden, we fear that the coalition-led offensives seeking to regain territory from the Houthis will, in the short-term, inflict yet more violence on civilians caught between the warring parties and expose them to armed reprisals.

Furthermore, we also fear that those countries who support the coalition in its quest “to liberate” Yemen – whatever the cost – will view such violence as acceptable collateral damage.

A collateral damage that may be of little concern to governments – as we have come to understand in recent months during our attempts to rally diplomats in Paris, Geneva and Washington on the need to put pressure on the warring parties to spare civilian lives.

There is still time for those States responsible for the human cost of the conflict to do all in their power to lessen this cost by sanctioning as such the war crimes committed by all the various parties and urgently restoring the population’s access to essential services.