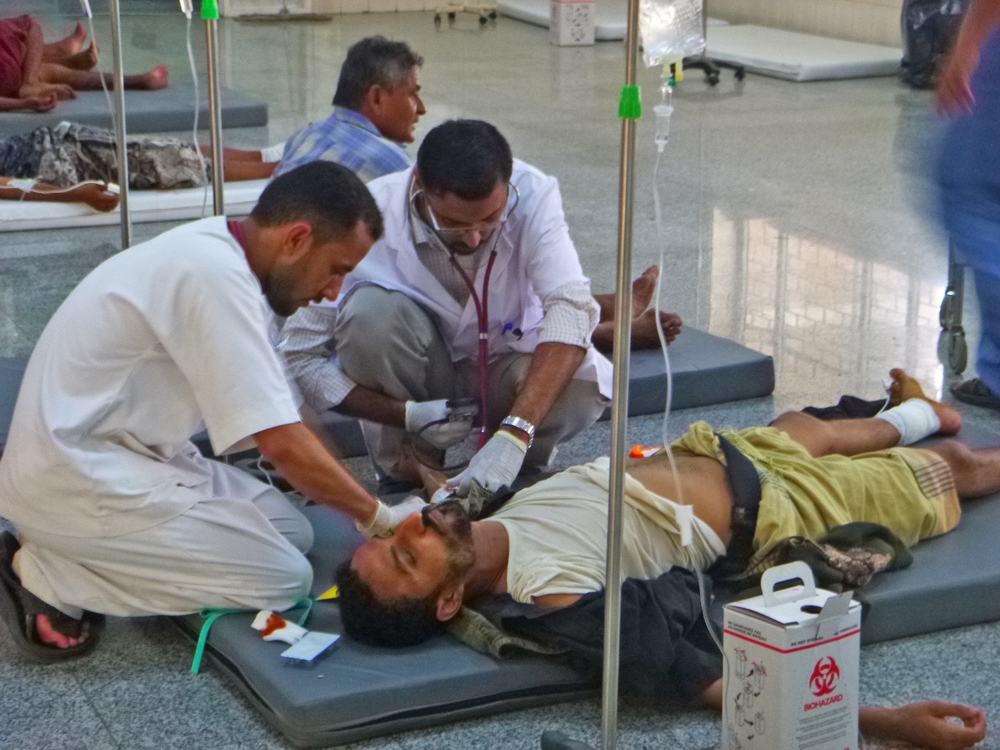 Yemen: "We are on lockdown inside the hospital"

Valerie Pierre is the project coordinator at MSF’s surgical project in the city of Aden, Southern Yemen, which has seen heavy fighting and air strikes in recent weeks.

When I first arrived in Aden in late January we could leave the hospital where we live and work to go out into the city. That all changed drastically, almost overnight, when the fighting and bombings began just over two weeks ago.

Since then we have been on lockdown inside the hospital.

Our surgical project now regularly deals with influxes of war wounded people. Since the fighting started we’ve treated 580 patients. The worst day was Thursday 26 March when 110  injured people came in for emergency care.

Today was relatively quiet, just ten patients came in for treatment, but I know that one of the major roads to the hospital has been blocked, so there may be people out there who have been injured but cannot get through to us. Once the road opens more people may come in, just as they do when the night-time curfew comes to an end at 6am each morning.

We’d like to send more ambulances out into the city to pick people up, but at times it is too dangerous.

Most of our patients are young men but we’ve also treated women and children. Almost all of them have been injured by gunshots, snipers, or shrapnel. I’ve seen men in their twenties come in with their legs blown off – I’ve never seen injuries like it before.

We’ve also had children who have been badly injured whilst they were playing. We are a surgical project, but at times people have injuries to their heads or necks that are too serious for us to treat so we have to refer them elsewhere.

Our small team of six international staff work 24/7 with our team of 140 Yemeni staff – they are the lifeblood of the hospital. Although it can be dangerous for our local staff to come to work, so many do every day.

Often it is too insecure for them to leave, so we try to help people to get back home or they can stay overnight at the hospital. Understandably, they are worried about their families, the future and what will happen to their country.

MSF
"We desperately need more international staff to arrive and relieve us."

Fighting and bombs falling around the hospital

The atmosphere is very tense, it is very stressful. We hear fighting coming from outside the hospital and hear bombs falling a little further away. We take it in turns to sleep for a couple of hours at a time, though it is often on the floor in the corridor, a safe distance away from the windows in our rooms.

We desperately need more international staff to arrive and relieve us. Our one surgeon, anaesthetist and head nurse are exhausted. A back up team has been assembled, but they are stuck in Djibouti.

The airports have closed so the only way into Aden is by boat, but there are serious restrictions in place at the port. It is not just people, we need more drugs and medical supplies. Some arrived today from Sana’a, but unless more can get through in the coming days we will run out.

It is not for us to ask how our patients were wounded – our business is only to provide medical care, though I do ask where in the city people were injured so that I can try to piece together where heavy fighting is taking place and where is too unsafe for our drivers to go.

Treating people from both sides

Some of those who come to us for treatment will doubtless be fighters, but they respect our rules to leave the conflict at the door and know that we treat people from both sides.

Our neutrality and impartiality are the best protection we have for ourselves and our ability to keep the hospital open. Because we have been providing free surgical care here since 2011 people have a good understanding of what we are trying to do.

For the moment the hospital is relatively safe and we have not been affected by the insecurity, but of course at times we worry that we are in danger. There are fighters everywhere and we don’t know who is controlling the area outside the hospital – it seems to change on an hourly basis.

When a large influx of patients arrive there is no time to think – we have to be strong, focussed, and keep a distance so that we can do our jobs.

It is when we sit down to debrief and make a list of the cases that have come in that day that we reflect a little more on what is happening.