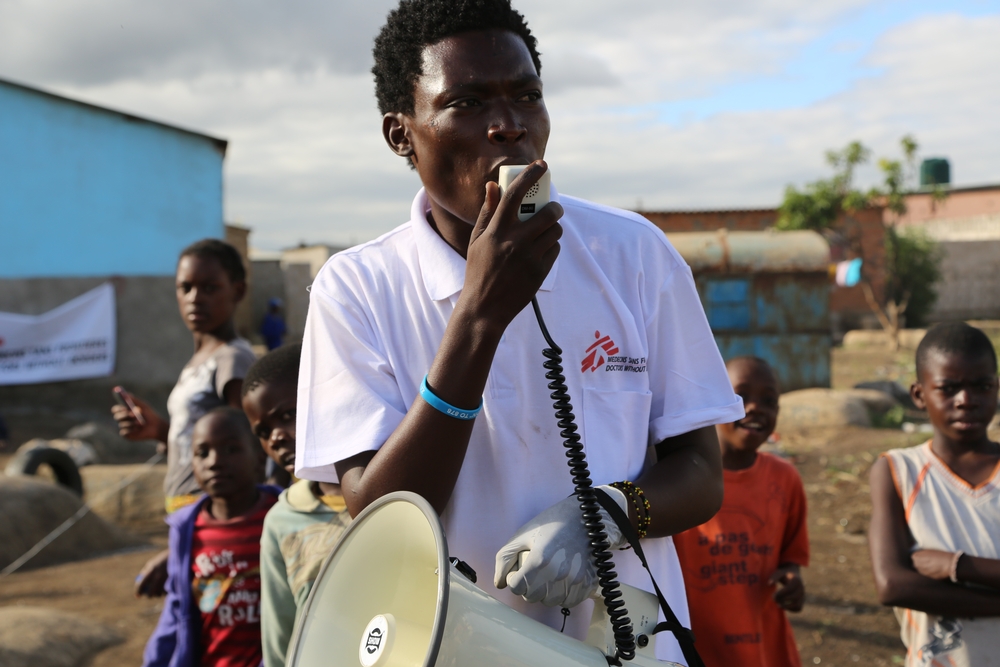 Zambia: Kicking out cholera with a megaphone

The sun finally breaks through after days of overcast skies and rain in Lusaka, the Zambian capital. The brooding mood in the sprawling townships and informal settlements where a cholera epidemic has been quietly spreading begins to lift.

The months-long drought which preceded the rainy season saw boreholes run dry. As a result, people have been collecting water from unprotected wells. When the rainy season started, floodwaters emptied shallow pit latrines into the streets and wells, contaminating water sources and leaving standing pools of dirty, stagnant water in the crowded streets of Lusaka’s townships, home to 1.2 million people.

Cholera, a waterborne disease, spreads easily in such conditions. Since February, 804 cholera cases have been reported, and 15 people have died.

Lusaka has experienced regular cholera outbreaks in the past, but in the five years since the last epidemic, the city’s inhabitants have lost much of their acquired immunity, leaving them more vulnerable to infection.

This is why teams from Médecins Sans Frontières (MSF), working with the Zambian Ministry of Health, are carrying out the biggest ever oral cholera vaccination campaign, targeting 578,000 people.

Laurence Hoenig/MSF
MSF, in collaboration with the Ministry of Health and World Health Organization, launched a cholera vaccination campaign after an outbreak was declared in February. The goal is to protect more than 500,000 people against cholera infection.

It’s a massive undertaking for the eight MSF fieldworkers, 60 Ministry of Health staff and 1,135 community volunteers from Lusaka’s four affected townships – Kanyama, Bauleni, George and Chawama. The logistics of vaccinating so many people swiftly across 41 sites is a challenge in itself, but, crucially, it also requires that communities have the right information and the motivation to come forward to be vaccinated.

In advance of the vaccinations, teams of community health promoters equipped with megaphones and printed flyers fan out into Kanyama to encourage people to take part. This township, home to quarter of a million people, was the epicentre of previous cholera outbreaks, and running a vaccination campaign here brings many challenges.

Laurence Hoenig/MSF
Mathilda came to be vaccinated with her daughter, Edna, who just turned three.

“Two minutes – that’s all it takes”

“Two minutes – that’s all it takes to get vaccinated against cholera so you won’t fall sick and risk dying,” volunteer health promoter Beenzu Chiwele tells four men outside a barbershop, while the owner looks on from the doorway. “Come today, because we’re finishing in Kanyama tomorrow.”

As she talks, Beenzu hands out flyers. “Help Us Kick Out Cholera!” exclaims the informative yellow pamphlet, which has the dates of the vaccination campaign and tips on avoiding infection printed inside. With the men showing some initial uncertainty, Beenzu shows them another pamphlet, printed in Nyanje (a widely spoken language in Lusaka), depicting two community leaders proudly displaying their vaccination cards. After some more determined coaxing from Beenzu, the foursome finally head toward the vaccination site.

The shame of cholera

People in Kanyama are deeply aware of the stigma that comes with cholera. “From way back, Kanyama has always been associated with cholera,” says Beenzu. “If you tell someone you’re from Kanyama, they say, ‘No, get away from me! You people from Kanyama, you’ve got cholera. It’s dirty and you’re bringing illness.’”

Beenzu remembers the last cholera outbreak vividly. “I was still in high school,” she says. “Many people died. I remember a man in my neighbourhood had cholera and collapsed in the street. He was incontinent and vomiting. We – those close to him – had to be sprayed with a chlorine solution to prevent being infected.”

Even though people know that cholera kills, they often delay seeking help until a very late stage of the disease because of the stigma, says Beenzu. “People come when they are already severely dehydrated, at the disease’s critical stage. So many patients are dead on arrival at the cholera treatment centres. Or they seek help in another area to avoid being seen by neighbours. Some people even die at home because of this social stigma.”

Laurence Hoenig/MSF
After receiving their dose of vaccine, and Edna and Mathilda receive a card indicating they were vaccinated.

A way to keep healthy

Beenzu has the right temperament to work as a health promoter. “My name means "visitors",” says Beenzu. “I’m called this because when my mother was expecting me, many people came to see her. Perhaps that’s why I like people and interacting with them. I can talk to people from all walks of life.”

The rest of the time, Beenzu is an environmental and public health student. “Initially I wanted to be a doctor,” says Beenzu. “I started thinking about ways to prevent people from getting sick. That’s when I learned more about environmental health and health promotion. Instead of seeing patients in the hospital, I wanted to find a way to keep them healthy.”

As the days go on, the number of people vaccinated grows at a steady rate, and 342,213 doses have been provided as of 20 April. MSF and the Ministry of Health are currently expanding their health promotion activities to encourage even more people to come and be vaccinated. At the same time, Ministry of Health teams continue to treat people infected with the disease in three cholera treatment centres that have been set up in the most affected areas.

Read more about the work of MSF in Zambia