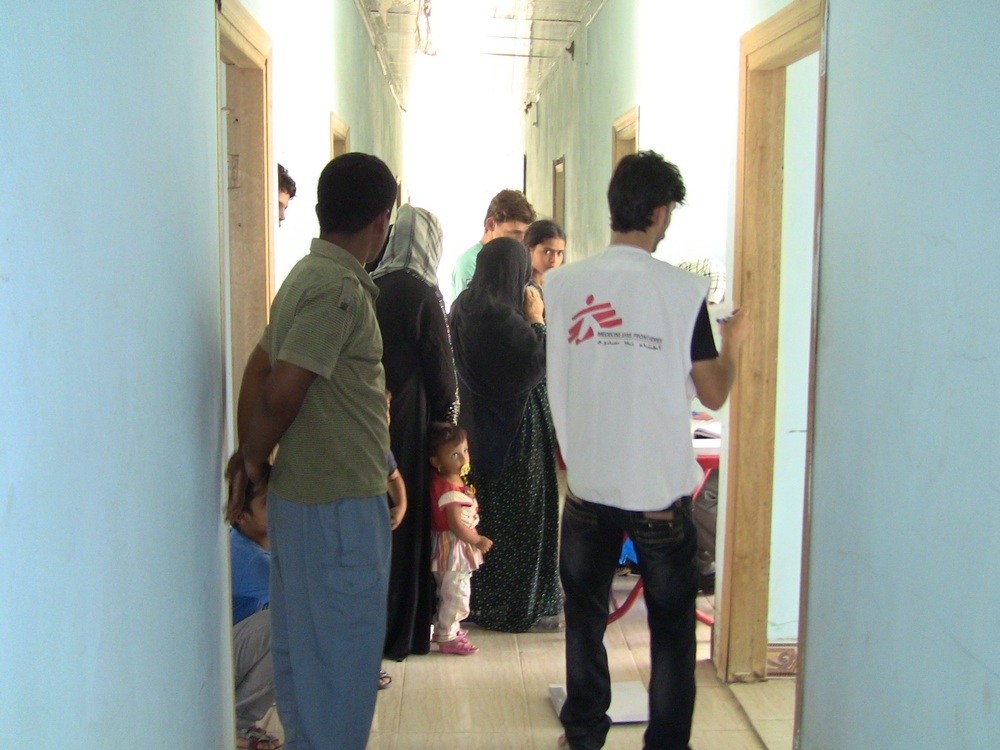 Iraq: 'With so many IDPs, the challenge is to target our work to the most vulnerable'

The recent conflict between Islamic State fighters and Kurdish forces in the north of Iraq has led to the displacement of over 250,000 people since 3rd August, many of whom have fled to Kurdistan.

In this interview, MSF’s Project Coordinator in Erbil, Will Harper, describes the situation on the ground, the MSF response, and the challenges ahead.

Describe the scale of the latest displacement of people into Erbil from Sinjar and other areas west of Kurdistan, since August 3rd?

"This has been a massive and very fast displacement of people, even compared to the displacement after Mosul fell in June. Some people literally left with the clothes on their backs. Many of these people entering Erbil had already been displaced two, three or four times, before finally entering their current location, having originally been in Mosul and its surroundings. With each displacement there are concerns and risks, leaving people more vulnerable and in greater need.

Both the communities and authorities are doing what they can and prioritizing what they feel is most important. You have to remember that Kurdistan is already hosting over 230,000 Syrian refugees, putting an unplanned strain on budget and resources. With the influx of IDPs (Internally Displaced People), resources have been stretched even further, creating more gaps – this is where MSF is trying to help.

How is MSF responding?

Over the past weeks, the populations MSF had previously been serving with a mobile clinic into the disputed areas between Erbil and Mosul fled, in anticipation of attacks. MSF has reallocated that team to respond to the largest camp for IDPs being constructed by the authorities in Erbil, Bharka Camp. MSF has been present in Bharka every day since 12th August to respond to primary health concerns and to provide a consistent presence in a camp that was otherwise chaotic and changing all the time. Some doctors and nurses who have been displaced themselves have joined our mobile teams, helping to create a stronger connection with the communities.

What is the situation in Bharka Camp?

Bharka Camp is a tough place to live for anyone, especially for people who have arrived with nothing after multiple incidents of displacement. There are currently over 2,500 people at the camp, with expansion plans underway.

Temperatures are in the mid-40s every day. There are serious concerns about the water and sanitation conditions but other actors are starting to get to work.

What are the main needs for the IDPs in the camp?

The IDP population is not only living in camps and collective shelters, but also in host communities.

What are the main challenges to providing assistance?

For us, the challenge is to balance what is possible and what is needed – for every location we are working to provide good quality healthcare in, there may be another group of people arriving or moving that we need to track and assist. With so many IDPs the challenge is to target our work to the most vulnerable.

How is MSF balancing its work for Syrian refugees and Iraqi IDPs?

The short answer is that everyone is working harder and working longer. Our Syrian staff working in the Syrian refugee camps have done an amazing job to maintain our standards in the camps while we move some of our team into new areas. It is critical that organizations and donors do not forget the 230,000 Syrian refugees in Kurdistan. Their situation remains the same even with the new international focus on Kurdistan.

What is the next step for MSF?

MSF has the capacity to intervene in emergencies, and to work at different levels of the healthcare system where other organizations might be less comfortable. Therefore, our strategy is to maintain our capacity to react quickly, while handing over stable activities to other health actors when possible.

Since other actors are now able to take over the primary health care provision in Bharka Camp, we will be handing over the clinic and working on responding to other urgent needs for IDPs with no access to care. MSF is always re-evaluating the situation and health needs across the country; we try to maintain programs where we are needed and expand as we can. We are constantly discussing with authorities and our local networks to find where the most pressing needs are for vulnerable people."

MSF medical care for the most vulnerable

MSF was the first health actor to arrive at the desolate IDP camp of Bharka last week – a camp in Erbil governorate where over 2,500 people, mainly Sunni and Shia Iraqis from Mosul, have now settled. Most families had initially found shelter from the scorching sun in an abandoned hangar at the camp, some 10km from the outskirts of Erbil, after an exhausting journey.

On 12th August, an MSF mobile clinic was in place to provide primary healthcare services while tents and infrastructure were still being set up in the camp. Since then, a team of two doctors and a nurse has carried out over 400 consultations. With temperatures soaring and gusts of wind lifting dust across the camp, water and shade are crucial for survival. MSF set up a rehydration point in the clinic to provide camp residents with specific therapy and monitoring.

More NGOs and UN agencies have now arrived at the camp, and MSF is planning to hand over the clinic and deploy its team to other locations where there is urgent need and where IDP populations lack access to care.

Despite the ongoing conflict in Iraq, which has made it very difficult for humanitarian organizations to work in the country, MSF is striving to provide medical care to the Iraqi people, as well as Syrian refugees in Iraq. MSF has worked continuously in Iraq since 2006, in various locations in the north and south of the country. In order to ensure its independence, MSF does not accept funding from any government, religious committee or international agency for its programs in Iraq, and relies solely on private donations from the general public around the world to carry out its work. In Iraq, MSF currently employs over 300 staff.