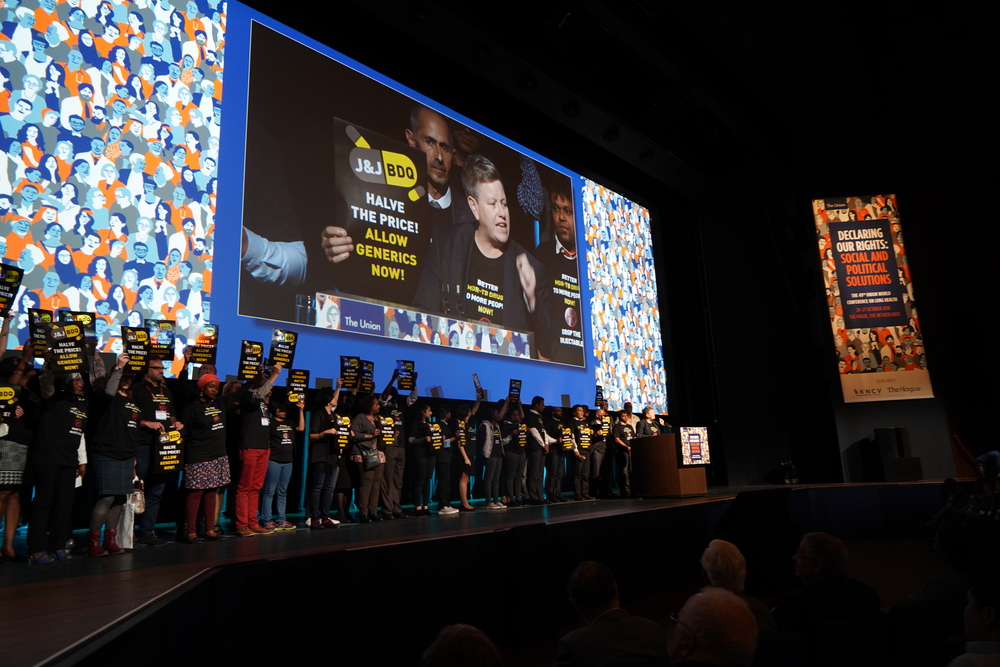 Newer medicines for DR-TB are desperately needed, but barriers to access, including high prices, keep them out of reach for most people around the world.

Médecins Sans Frontières (MSF) joined tuberculosis (TB) activists to disrupt the opening ceremony of the 50th Union World Conference on Lung Health in Hyderabad today, urging pharmaceutical corporations to make improved drug-resistant TB (DR-TB) treatment affordable and available for hundreds of thousands of people around the world who desperately need it. For the first time in over half a century, there are three new DR-TB drugs – bedaquiline, delamanid and, most recently, pretomanid – that can offer people a better chance to be cured, but barriers to access including high prices are preventing their scale-up by countries. Only 20% of people with DR-TB who need these newer drugs have been able to receive them.

According to the latest World Health Organization (WHO) Global TB Report, in 2018, an estimated half million people fell ill with DR-TB, yet only one in three started treatment. DR-TB cure rates remain unacceptably low: only 56% and 39% of people treated for multidrug-resistant tuberculosis (MDR-TB) and extensively drug-resistant TB (XDR-TB) were successfully cured, respectively.

“Bedaquiline, delamanid and pretomanid have shown the potential to cure more people of DR-TB with far fewer side effects than older toxic treatments that need to be injected and are still used in most countries,” said Sharonann Lynch, HIV & TB Policy Advisor for MSF’s Access Campaign. “It’s inexcusable that drug corporations continue to put profits over people’s lives, as if medicines were a luxury. It’s time to smash the status quo: all three newer TB drugs must be affordable to everyone who needs them so more lives can be saved.”

High prices and corporations’ unwillingness to license their drugs so generics can be produced are standing in the way of improved DR-TB treatment outcomes with these new drugs. Currently, the price of DR-TB regimens ranges from US$1,040 to $11,680, depending on the treatment length and combination of drugs needed. In order for more lives to be saved, MSF demands the following:

Since it was approved for use in 2012, just over 37,000 people have ever received bedaquiline. Johnson & Johnson (J&J) must lower the price of bedaquiline to no more than $1 per day ($30 per month/$180 for a six-month treatment course) for everyone who needs it. MSF demands this price cut considering that bedaquiline is the result of a joint research and development effort by public and private entities, and the larger TB community—not by J&J alone. Substantial public investments and contributions to provide evidence on the drug’s therapeutic value have come from the US government; UNITAID; health ministries in countries with high rates of TB; the South African Medical Research Council; academic institutions; non-governmental organisations (including MSF); and a host of philanthropic donors. J&J should therefore not be the sole decisionmaker regarding who has access to the drug. Currently, the corporation charges at least double the $1 per day price MSF is demanding: the lowest price for bedaquiline is $400 for a six-month treatment course ($67 per month) for countries eligible to purchase the drug through the Global Drug Facility (GDF), an organisation run by the Stop TB Partnership that supplies TB drugs to low- and middle-income countries. And J&J charges far more in other countries. Additionally, many people require up to 20 months of the drug, raising the price of bedaquiline alone to $1,200 – and multiple additional drugs are needed to treat DR-TB. Researchers have calculated that the drug could be produced and sold at a profit for much less – as little as $0.25 per day* (less than $8 per month) if the drug is scaled-up by TB programmes.

Having multiple producers of critical drugs is important to secure a stable supply, and competition among producers is a proven way to reduce the price of medicines. MSF therefore also urges J&J to issue a non-exclusive license to the Medicines Patent Pool (MPP), which would enable multiple drug manufacturers to produce more affordable generic versions of bedaquiline. J&J has so far refused to license bedaquiline to the MPP.

Since it was approved for use in 2014 and until two months ago, fewer than 3,000 people have ever been treated with delamanid. It is one of the most expensive DR-TB drugs, which its producer, Otsuka, prices at $1,700 for a six-month treatment course ($283 per month) through the GDF. Its high price contributes significantly to the cost of treating people with MDR-TB and XDR-TB, and has had a chilling effect on treatment scale-up. Mylan, which licenses the drug from patent-holder Otsuka, recently announced that it will charge $940** for a six-month treatment course ($157 per month) as of June 2020 in South Africa. At this price, the drug remains unaffordable. Estimates suggest that delamanid could be produced and sold for a profit for as little as $0.16 per day* (less than $5 per month). MSF urges Mylan and Otsuka to lower the price of the drug much further for all countries, and calls on Otsuka to issue a non-exclusive license to the MPP to encourage multiple generic manufacturers to produce more affordable versions of the drug.

"People with TB are tired of waiting for access to the newer and better drugs. It’s time for J&J, Otsuka, Mylan and TB Alliance to take action to allow people everywhere to access the medicines they need to stay alive."

In August 2019, the US Food and Drug Administration (FDA) approved the use of a three-drug regimen (BPaL: bedaquiline + pretomanid + high-dose linezolid) containing a new drug, pretomanid, for people with XDR-TB and those who cannot tolerate or haven’t responded to standard MDR-TB treatment. Pretomanid was developed by the not-for-profit organisation TB Alliance, and in April 2019, was licensed to pharmaceutical corporation Mylan to manufacture, register and supply the drug. This week, TB Alliance announced an agreement for Indian drug corporation Macleods Pharmaceuticals to manufacture the drug. GDF recently announced that Mylan will charge $364 for a six-month treatment course of pretomanid ($61 per month). This price is still too high, especially considering that DR-TB treatment requires multiple drugs and people who do not respond to treatment may require treatment for longer than six months. With this price, a six-month treatment course of the BPaL regimen will be priced at $1,040. It has been estimated that generic versions of pretomanid could be produced and sold at a profit for as little as $0.36 per day* (less than $11 per month). MSF calls on TB Alliance to make the drug affordable for everyone who needs it, especially considering that TB Alliance is a not-for-profit organisation, funded by governments (including Australia, Germany, the UK and the US) and philanthropic sources, that has a specific mandate to deliver new TB treatments to those in need. TB Alliance therefore does not need to recoup any investments through high pricing. Instead, they must ensure affordable access to all. MSF also joins the TB community in urging TB Alliance to promptly address the unanswered research questions around pretomanid, and publish and make available its pretomanid clinical trial data.

Getting to an affordable price for these new drugs is critical since treating DR-TB requires a combination of four or more medicines. MSF has called for treatment of DR-TB to be no higher than $500 per person for a complete regimen. As long as the new drugs are priced out of reach, this target will not be a reality.

“When I was on the standard DR-TB treatment that included drugs that needed to be injected, I suffered intense side-effects, including damage to my kidneys and some hearing loss,” said Nolduwe Mabandlela, who was diagnosed with MDR-TB in Khayelitsha, South Africa in 2017 and cured in 2019. “When MSF switched me from the old toxic treatment to a regimen that included the newer drugs bedaquiline and delamanid, which don’t have the same kind of harsh side-effects, my health improved much faster.”

“We’re protesting today because people with TB are tired of waiting for access to the newer and better drugs. It’s time for J&J, Otsuka, Mylan and TB Alliance to take action to allow people everywhere to access the medicines they need to stay alive,” said Lynch.

For more information about bedaquiline, delamanid and pretomanid:
DR-TB Drugs Under the Microscope, 6th Edition
Making the Switch

TB is an ancient disease and is the number one infectious disease killer worldwide, with 95% of deaths in developing countries. The TB epidemic is exacerbated by the rise of drug-resistant TB (DR-TB), which in 2014 was declared by the World Health Organization (WHO) as a global health emergency. An estimated half-million people developed DR-TB in 2018. Highly resistant forms of the disease are particularly hard to treat: in 2018 only 39% of people with XDR-TB were successfully treated.

Currently, WHO recommends 18-20 months of treatment for DR-TB with four-drug regimens that combine bedaquiline and linezolid with older and repurposed TB drugs. Unfortunately, despite updated WHO recommendations, many countries have not implemented these new recommendations, and patients continue to receive old and toxic regimens, containing injectable agents that lead to severe side effects. BPaL (bedaquiline + pretomanid + high-dose linezolid), a shorter and simpler regimen, could therefore substantially improve the treatment of XDR-TB.

MSF is the largest non-governmental provider of TB treatment worldwide and has been involved in TB care for 30 years, often working alongside national health authorities to treat people in a wide variety of settings, including chronic conflict zones, urban slums, prisons, refugee camps, and rural areas. As of September 2019, across MSF projects in 14 countries, more than 2,000 people have been treated with the newer drugs, including 874 with delamanid, 1,946 with bedaquiline, and a subset of 429 people who were treated with a combination of both medicines.

In addition to providing DR-TB treatment in various settings, MSF is conducting research together with partner organisations to develop the evidence base for the therapeutic value of newer DR-TB treatments. In 2017, MSF launched the TB PRACTECAL trial (ClinicalTrials.gov Identifier: NCT02589782), a randomised, controlled, multicentre, Phase II/III adaptive trial to evaluate the safety and efficacy of six-month regimens that contain bedaquiline, pretomanid and linezolid (standard dose) with or without moxifloxacin or clofazimine, for the treatment of adolescents and adults with multidrug-resistant (MDR)-TB or XDR-TB. This trial should help inform which combinations of bedaquiline, linezolid and pretomanid-based regimens are effective and safe for the treatment of MDR-TB. The trial is sponsored by MSF and is being conducted in seven sites in Belarus, South Africa and Uzbekistan. Outcomes from this trial are expected in early 2022.