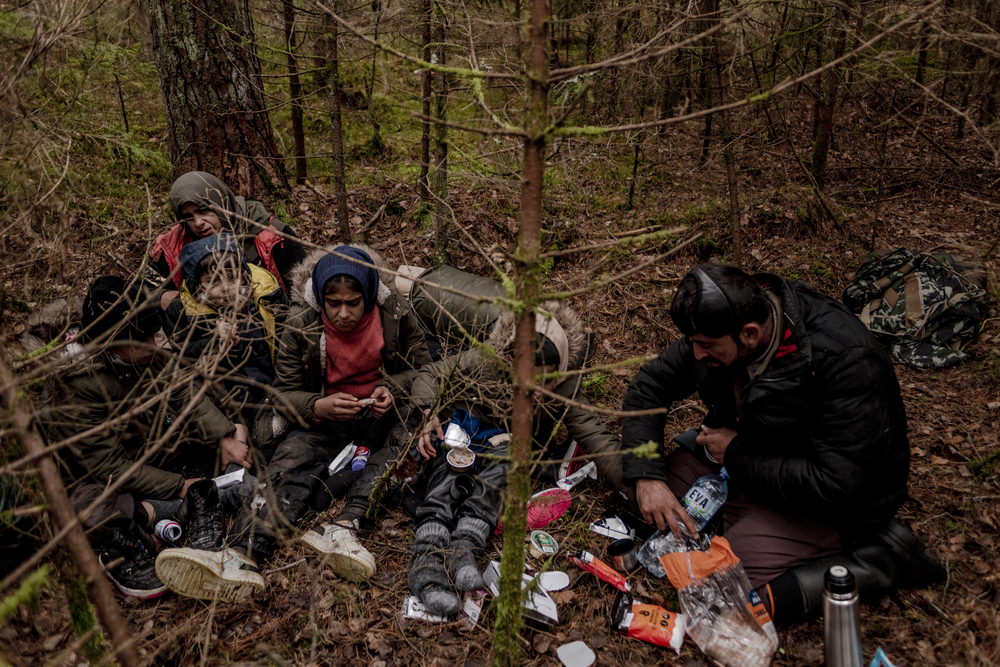 6th January, 2022 – Three months after sending an emergency response team to assist migrants and refugees crossing from Belarus to Poland, international medical organisation Médecins Sans Frontières / Doctors Without Borders (MSF) has withdrawn its team after being repeatedly blocked by Polish authorities from accessing the forested border region, where groups of people are surviving in sub-zero temperatures, in desperate need of medical and humanitarian assistance. 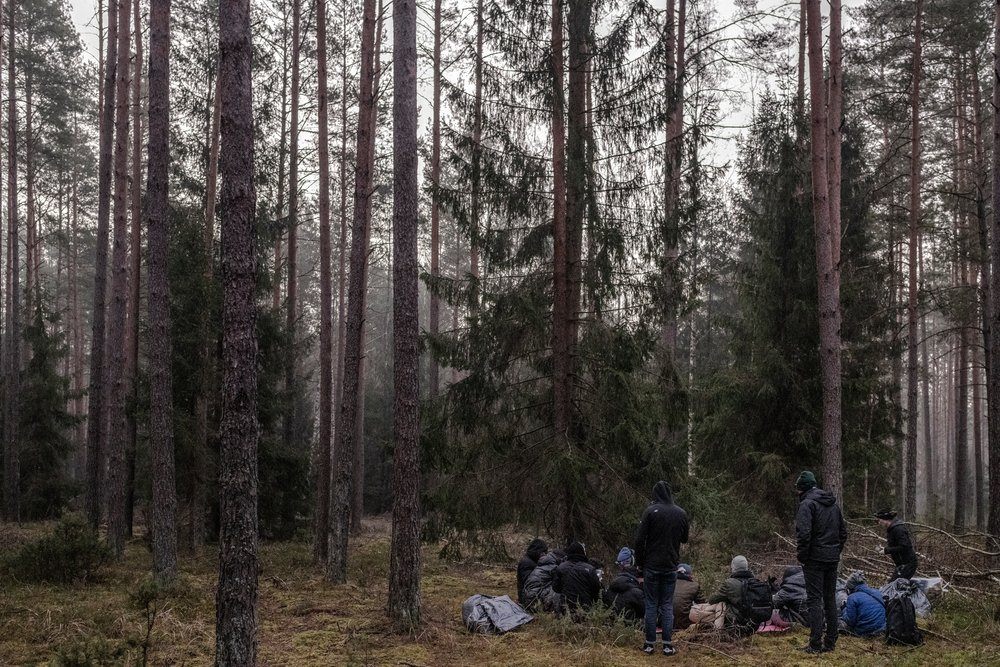 A group of Yemeni and Palestinians continue their journey after receiving food, warm clothes and batteries from a group of activists in a "silent intervention". (November, 2021).

“Since October, MSF has repeatedly requested access to the restricted area and the border guard posts in Poland, but without success,” says Frauke Ossig, MSF emergency coordinator for Poland and Lithuania.

"We know that there are still people crossing the border and hiding in the forest, in need of support."

“We know that there are still people crossing the border and hiding in the forest, in need of support, but while we are committed to assisting people on the move wherever they may be, we have not been able to reach them in Poland.”

Since June 2021, thousands of people have attempted to reach the EU by crossing from Belarus into Poland, Lithuania and Latvia. In response, Poland has constructed border fences, brought in its military and declared a state of emergency along its border zone. 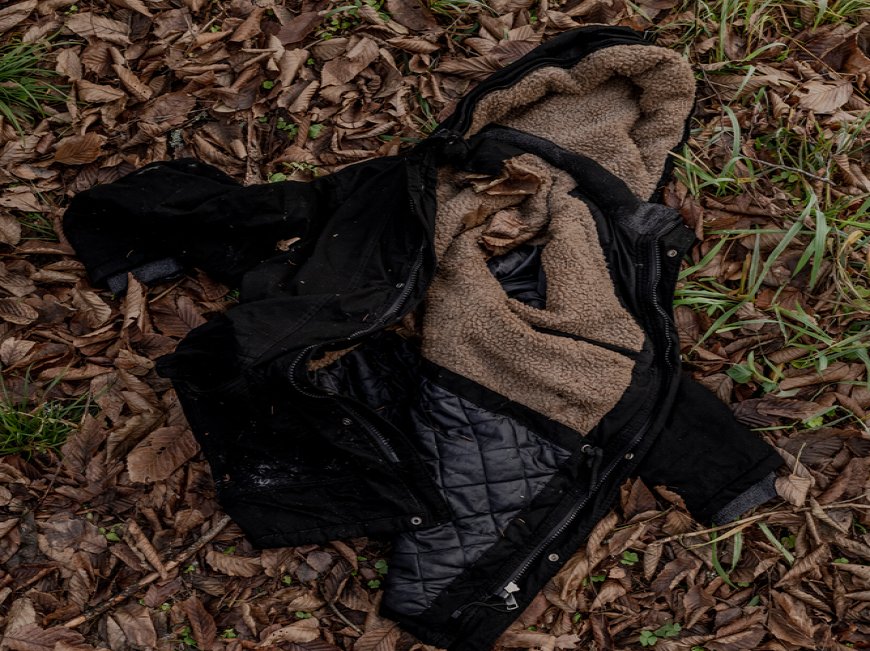 This area has become tightly controlled with access restricted, including for aid organisations, volunteer groups and the media.

Over the past six months, there have been numerous instances of Polish border guards forcibly returning migrants and refugees to Belarus, in disregard of their intentions to request international protection and in breach of their rights. 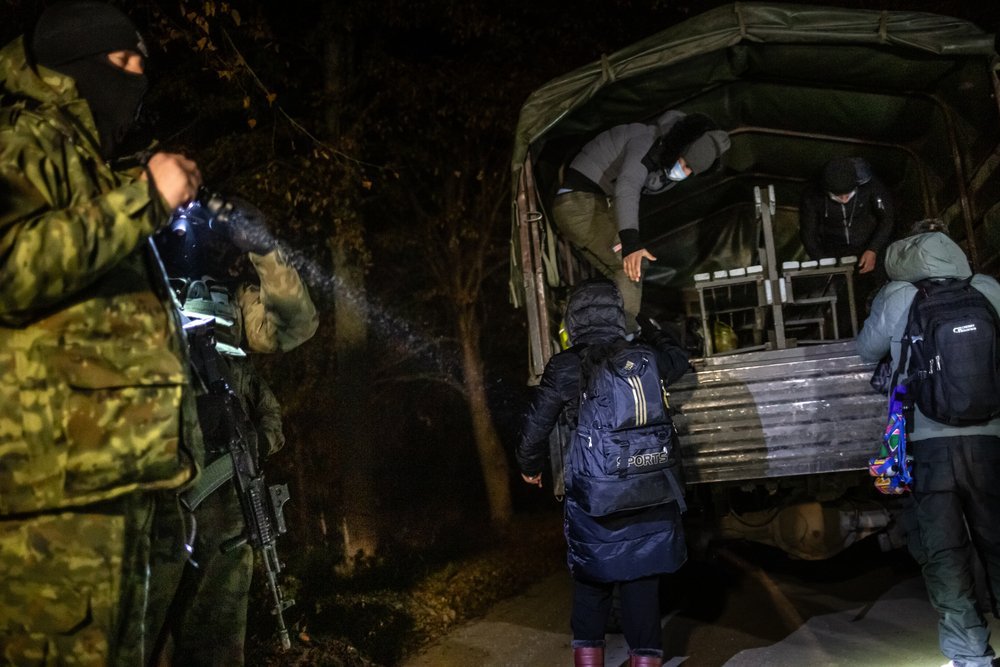 Maciej Moskwa/Testigo
A family of 13 Iraqi Kurds including 4 children asked for asylum in Poland. (October, 2021).

Fear of such ‘pushbacks’ and violence at the hands of border guards has led women, men and children to try and make their way through the area without being detected, hiding in the forests in extreme winter temperatures without food, water, shelter or warm clothes.

At least 21 people have lost their lives in the attempt in 2021.

Although numbers of people attempting to cross into the EU have fallen over recent months, there are still groups of migrants and refugees in the region. 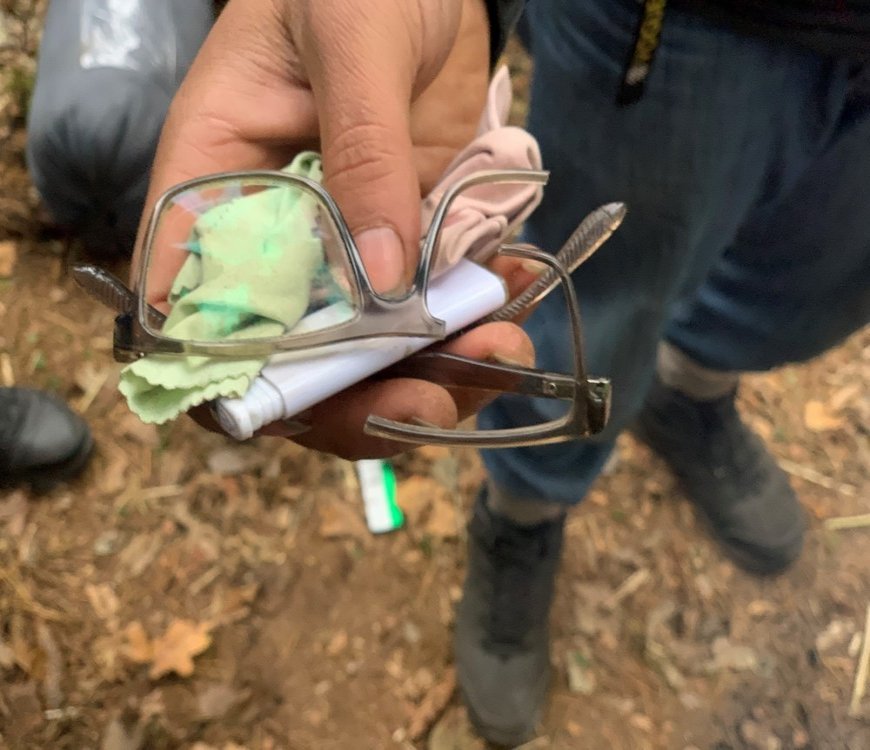 Leah Cowan/MSF
A man from Sulaymaniyah, Kurdistan Iraq, shows his glasses broken by the Polish border guards during a violent pushback at the Belarusian-Polish border. (November, 2021).

On 18 December, the MSF team joined a Polish civil society organisation Salam Lab in providing assistance to five Syrians and one Palestinian who managed to navigate their way outside of the restricted zone and who reported having been forcibly returned to Belarus several times and having experienced violence by the border guards.

The MSF team has heard numerous first-hand reports of violence, ranging from the theft and destruction of people's belongings to intimidation, intentional violence and physical assault on all sides of the borders. 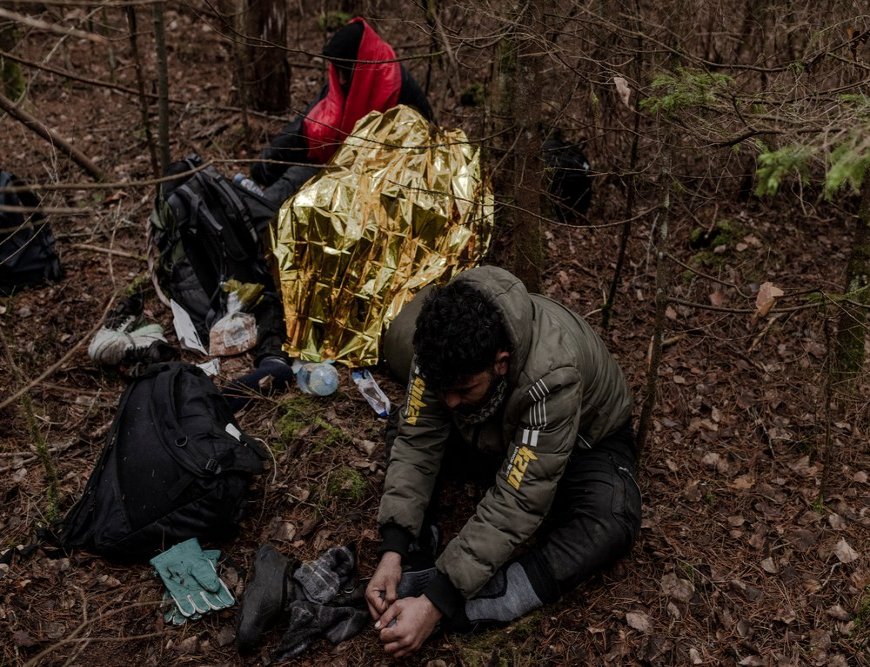 When found by a local resident who is trying to help people on the move, he was trembling, and his clothes were completely wet. Near Siemianowka, Poland. (November, 2021).

MSF staff have witnessed physical injuries which coincide with these accounts. eople are being attacked and beaten at the hands of border guards, and yet state officials continue to allow the practice of pushing people between borders knowing that such maltreatment continues.

MSF teams have been working in Belarus, Lithuania and Poland in response to the crisis but have not succeeded in gaining authorisation to enter the border areas of any of the three countries, despite repeated requests to respective authorities. 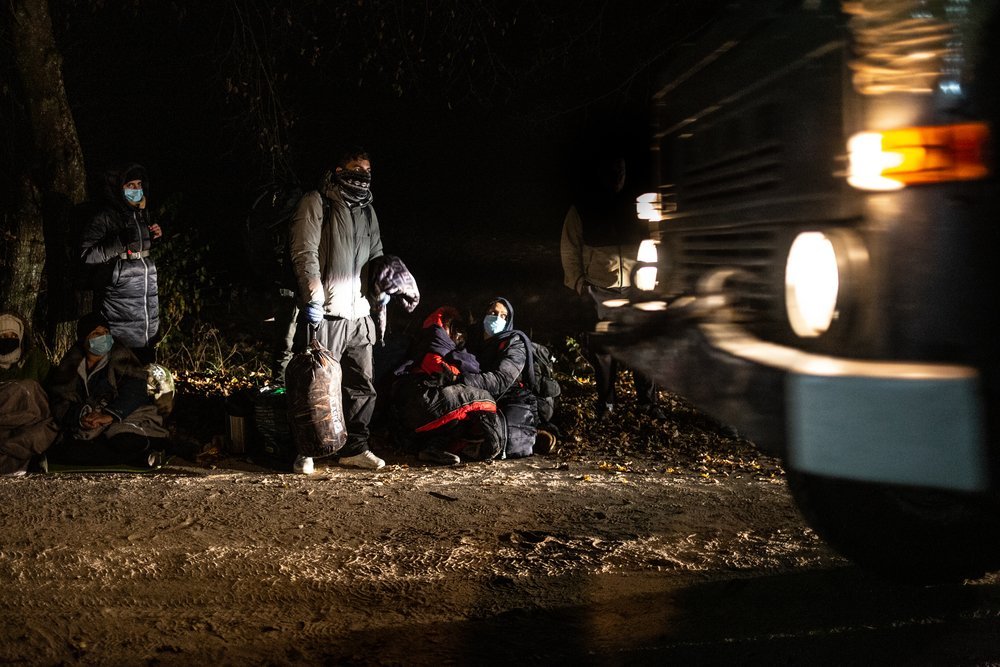 Maciej Moskwa/Testigo
Narewka, Poland. Iraqi family who got to Poland from Belarus, waiting for the border guards. (October, 2021).

With aid organisations, non-governmental organisations and volunteer groups all blocked from accessing the border zone in Poland, it has largely fallen to residents of the restricted areas to provide assistance to people on the move. 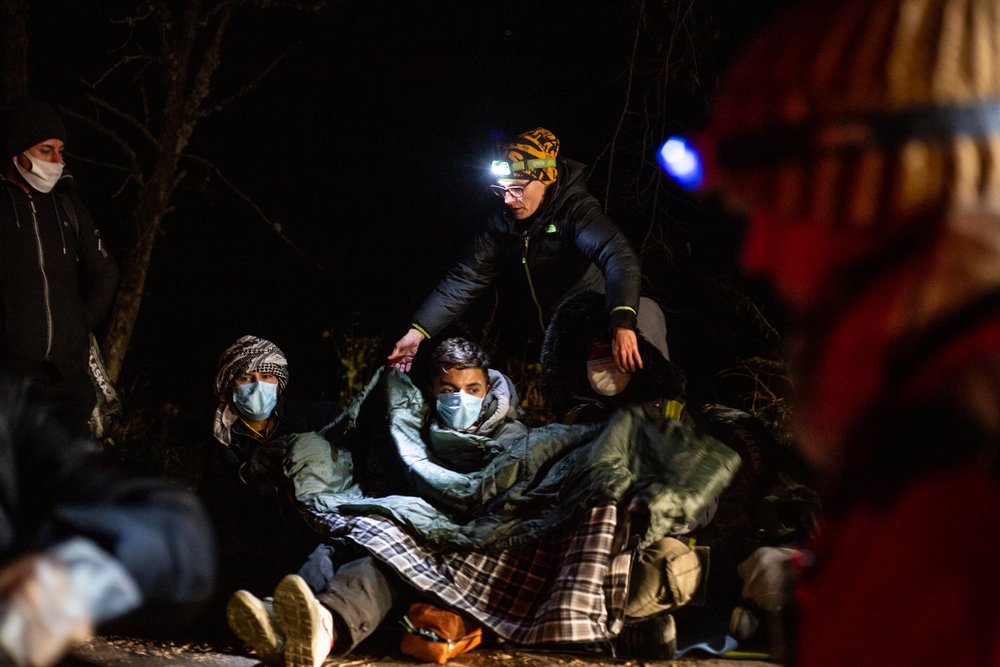 “Some of the volunteers have been vilified and intimidated, and had their property destroyed ”

Ossig states that not only have organisations been blocked from entering the restricted zone but that “some of the volunteers have been vilified and intimidated, and had their property destroyed in what is believed to be an attempt to stop them from providing support”. 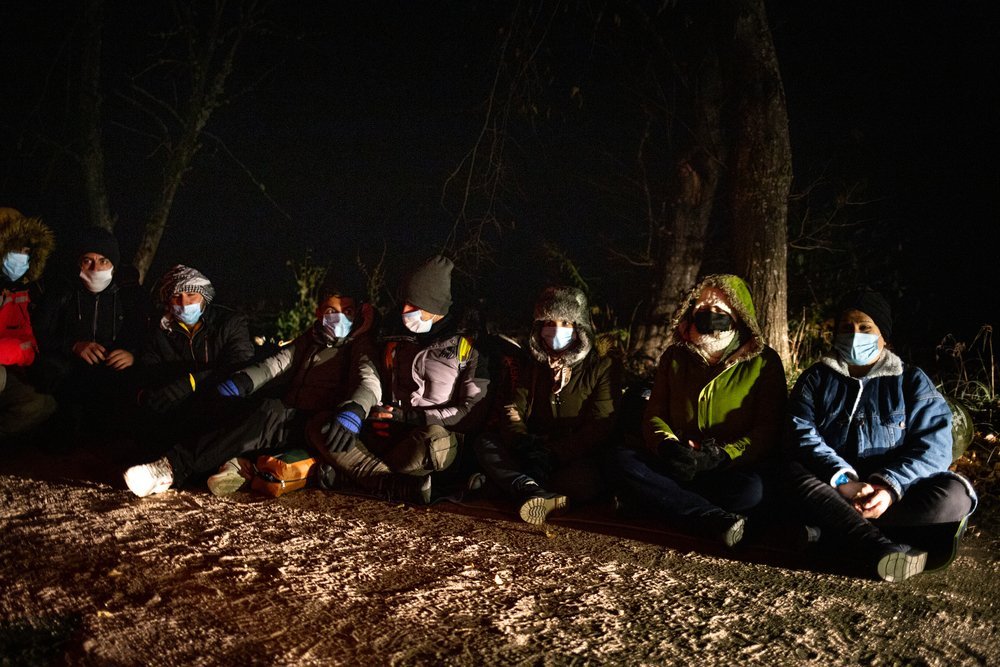 According to Ossig, this has taken a heavy toll on local residents in the area.

Those migrants and refugees who have managed to make their way beyond the restricted areas have largely received humanitarian aid from local non-governmental organisations, groups and individuals.

The MSF team has provided support to these groups, as well as providing basic medical care, mental healthcare and humanitarian aid to a limited number of people who managed to make their way beyond the restricted areas. 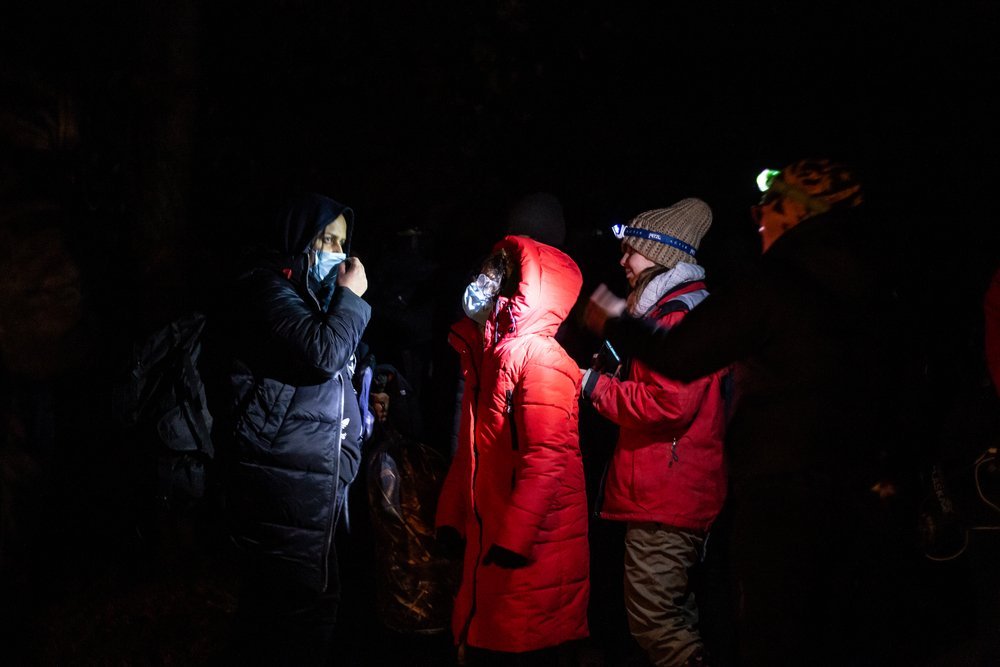 Maciej Moskwa/Testigo
Mother and daughter from Iraq, getting support from Polish volunteers (from the NGO Fundacja Ocalenie). (October, 2021).

MSF is concerned that the current policy of restricting access to aid organisations and volunteer groups could result in yet more migrants and refugees dying.

These policies are yet again another example of the EU deliberately creating unsafe conditions for people to seek asylum at its borders.

“The current situation is unacceptable and inhumane. People have the right to seek safety and asylum and should not be illegitimately pushed back to Belarus,” says Ossig.

“This is putting lives at risk”.

As long as impartial, non-governmental humanitarian groups cannot reach these people to provide them with water, food, warm clothing and medical care, the number of deaths will likely increase as temperatures continue to drop. 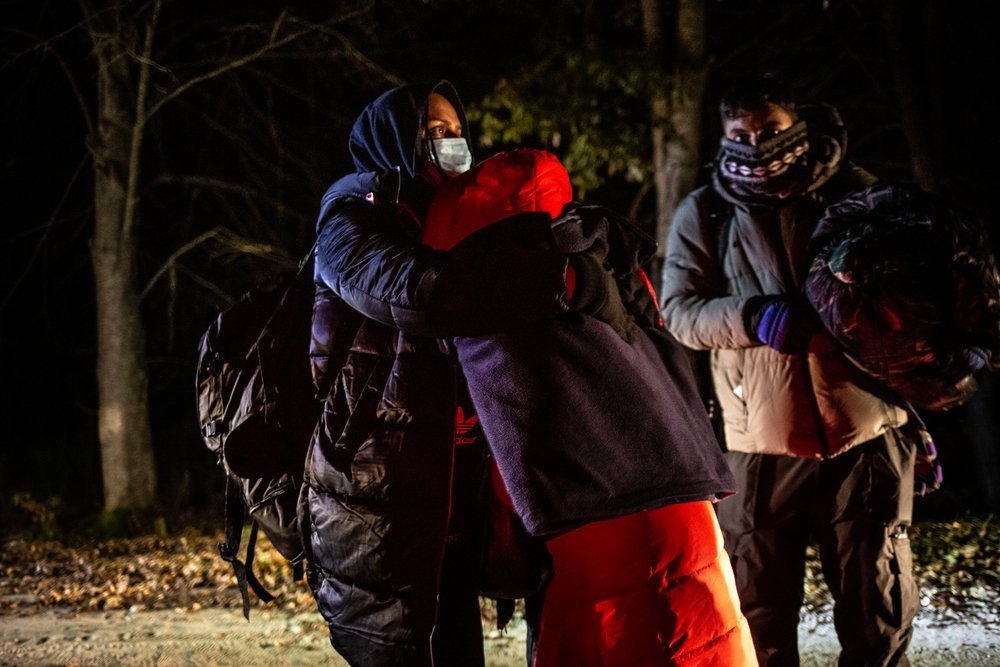 Maciej Moskwa/Testigo
Mother hugging and warming up her daughter. (October, 2021).

MSF is withdrawing its emergency response team from the Polish border area but will continue to work in Poland and – in line with the initial plans - is in the process of establishing a country office in the capital, Warsaw. Meanwhile MSF’s activities in response to this crisis will continue in Lithuania and Belarus. MSF remains committed to assisting people on the move.