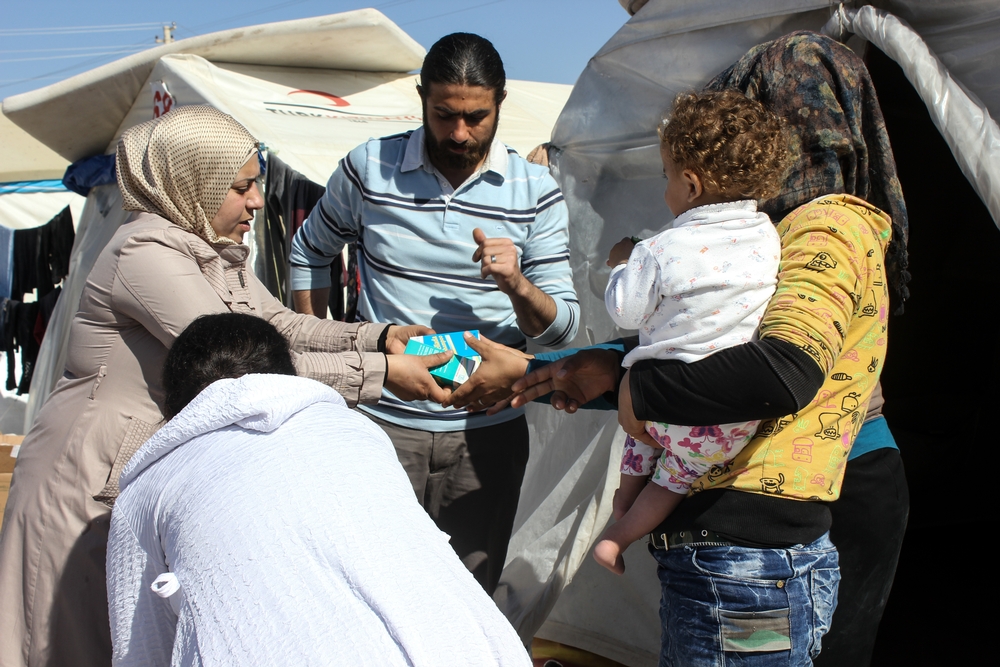 Médecins Sans Frontières (MSF) is providing medical assistance to refugees in the town of Akcakale, just over the northern Syrian border in Turkey.

Mohammed is leaning on his crutches at the fence of the clinic, a picture of total dejection.

We go back with him to his tent. The tent is in a transit camp for Syrian refugees on the Turkish/Syrian border. And the refugees – about 3000 of them – have just been told they are being moved to another camp, an official, permanent camp, some 80 km distant. Tomorrow morning, at 10.00 am. So they must pack their bags and get ready.

Fear to leave, dangerous to stay

The problem is, this camp is populated by refugees from a different ethnic group and so with a completely different language and customs. And with the recently exacerbated enmity, consequence of the ongoing conflict in Syria, most people are refusing to go. They fear for their safety there, even though two separate, protected areas in the camp have been established.

Diala Ghassan/MSF
Akcakale transit camp, for Syrian refugees in Sanliurfa, south-east Turkey. The camp host almost 4000 people, in which most of them are children. MSF started working in the camp in November, 2015

“We have only just arrived,” Mohammed tells us despairingly when he is back in his tent. He is there with his wife and three young children. “It was too dangerous for us to stay in our home town in Syria. And it was a long journey and took all my money - over $2500 – to get here.”

“We came here to be safe, for stability and security for our children. And now we have to move again! We cannot go to that camp, it’s too dangerous for people from where I come from.”

We hear the same story over and over, of people too scared to go to the camp.  And they have taken so long to reach some safety here, so many displacements already. A woman sits on the steps of the clinic, her head in her hands, weeping. “What can I do, what can I do? I have eleven children to take care of, my husband was killed by a bomb in Syria. I’ve been taking food from the rubbish bins to get enough to eat…”

I have met one of her children at the ante-natal programme we’ve just started, a young woman nine months pregnant.  I remember there are ten women in their ninth month, due to give birth soon. Not the time to be moving to a new camp.  Nor to be sleeping on the streets.

Dark grey clouds are looming over the rows of tents and rain threatens as evening approaches. The feeling of desperation is palpable; our feeling of helplessness is equally overwhelming.

A maelstrom of wretchedness

Powerless to prevent the move, as we watch people piling whatever tiny number of possessions they have into plastic sacks, we do whatever small things we can to help them. I ask our team of outreach workers to track down the malnourished babies we were supporting with baby formula; and we ladle milk powder into countless small pots to tide them over for a few days.

And we go from tent to tent, asking the refugees where they plan to move to, taking people’s contact numbers so that we can follow them up and maybe distribute some non-food items to them: tents, blankets, mattresses.

Such a small contribution in this maelstrom of wretchedness.

Diala Ghassan/MSF
MSF health workers are delivering medical supplies to one of the tents in Akcakale camp, Turkey.

The next morning a wave of human misery enfolds the perimeter fence of the camp. A young woman, tears rolling down her face and two small children clutching onto her, waits beside her pathetic pile of belongings. Others are loading potato sacks of stuff onto carts. A tiny proportion of the refugees – maybe a couple of hundred – have decided to move to the new camp.

And the rest – where will they sleep tonight?

These are the people we in Europe have closed our doors to.

Read more about our work with refugees from the Syrian crisis