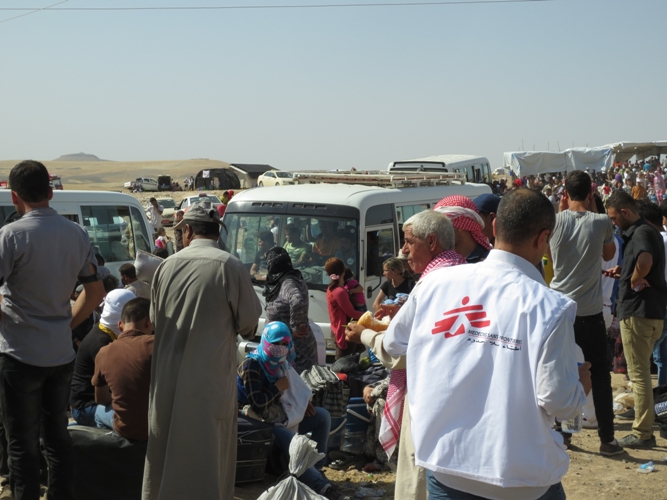 Syrian refugees are crossing the border into Iraqi Kurdistan in huge numbers, with more than 42,300 passing through the Peshkabour border crossing since it reopened a week ago on 15 August.

Image Caption
Consultations at the border where more than 42,300 people have crossed in the past week from Syria. Iraq 2013 © Paul Yon/MSF

Teams from the international medical organisation Médecins Sans Frontières/Doctors Without Borders (MSF) have set up health posts on both sides of the border, providing medical consultations and distributing water to refugees waiting to be transferred to five transit camps which are currently being set up in Erbil and Sulaymaniya governorates.

“The majority of patients are children, pregnant women and mothers who are suffering from moderate dehydration due to the long distances they’ve had to walk or the long waiting time before crossing the border.  We are also seeing a lot of cases of asthma.” Paul Yon, Médecins Sans Frontières' head of mission in Dohuk

“The refugees report having fled Syria from a variety of locations after hearing that the border had reopened after being closed for several months,” says Yon.

“But in recent days, the majority reported fleeing their homes around the city of Al-Malikiyah (also known as Derek) following sporadic aerial bombardments a few days ago.”

On the Iraqi side of the border, Médecins Sans Frontières teams have provided more than 200 general healthcare consultations to refugees waiting to be transferred to Erbil and Sulaymaniya. “We haven’t identified any critical health concerns so far,” says Yon.

The number of consultations is increasing daily.

Médecins Sans Frontières teams are also providing medical advice to patients who need to be referred to hospital facilities. Yesterday, two wounded people crossed the border and were transferred to Dohuk hospital in ambulances provided by local health authorities.

On the Syrian side of the border, a Médecins Sans Frontières team has been on the ground since 18th August, where it has distributed water to 6,200 people waiting to cross the border. The team will be reinforced today and will continue to provide water supplies to new arrivals, as well as monitoring the refugees’ needs.

“We are monitoring the situation and we stand ready to move our health posts in order to meet the needs,” says Yon. In coming days, Médecins Sans Frontières will also start providing general healthcare consultations to the refugees who have settled in different camps in Erbil governorate.

MSF teams have been working in the Domiz refugee camp in Dohuk governorate since May 2012, home to 42,000 Syrian refugees, providing general healthcare and mental health services. MSF also plans to assess the needs of some 70,000 refugees who have settled in the city of Dohuk.